An analysis of title screens: Metroid, Mario, and... Spec Ops: The Line 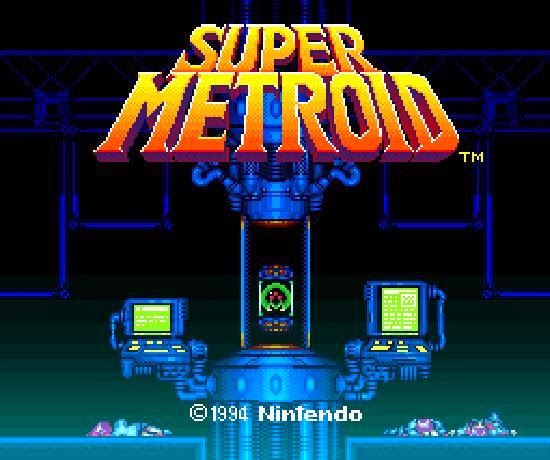 Title screens are obsolete in today's gaming industry. They're a holdover from the days of arcades, when the screen had to show something even when no one was playing it. Today, games could easily cut straight to the main menu. But in reverence to their roots, virtually every modern video game still has the classic title screen, with the game logo in big letters and "PRESS START" beneath it, replacing the "INSERT COIN" of yore.

And it's kind of beautiful. Why do we need title screens in 2014? They serve no practical purpose. I guess they just look cool. They're gaming's equivalent of the title page at the beginning of a novel--unnecessary, but a time-honored tradition.

When you think of your favorite games, even ones you haven't played in years, you can likely conjure up the image of the title screen in your head. They usually play with iconic, mood-setting music in the background, and when they sit idle for a few seconds often go to "demo mode" or "attract mode," where they show video of gameplay or a cutscene introducing you to the storyline.

As games have progressed, they do new and wonderful things with their title screens. Let's take a gander at title screens over the years, beginning with my favorite series.


The title screen for the original 1986 Metroid is most notable for its music. In an era when game soundtracks were all about upbeat, hummable melodies, Metroid was the first to go for dissonance. It sets a foreboding tone for the whole game, particularly interesting considering it was made by Nintendo, best known for family-friendly fun. If you wait long enough, though, the dissonant music evolves into a memorable tune. Metroid's title screen also gives you the only story information you ever get, aside from the game's instruction manual.


Super Metroid's title screen is a work of art. It begins with an intro. "1994" flashes across the screen, proudly displaying the year the game was made. Not many games do that. "NINTENDO"... "PRESENTS"... "METROID 3"... and then the main title screen with the huge SUPER METROID logo finally appears. The ominous music coalesces into a revised version of the creepy piano tune from the original Metroid title screen. How great is that! I enjoy that "METROID 3" appears before the title screen; Super Metroid is never referred to as "Metroid 3" apart from this little intro sequence. Something about it makes the intro more cinematic and epic to me.

And then there's the actual content of the title screen. We see what looks like a laboratory, with an infant Metroid encased in glass. It's the baby Metroid that Samus saved at the end of Metroid II! It's so tiny and harmless! But... there are dead bodies strewn across the lab floor. What happened here?! Like a great opening line in a novel, this title screen hooks you in to the story.

It gets even better. In the opening level of the game, you walk through the very room depicted in the title screen... but now the glass is shattered and the Metroid is nowhere to be seen. STORY SYNERGY!


Nintendo's sliiightly more popular franchise, Mario, also has an interesting history with title screens. From early on in the series, the title screens have presented the games as theatrical productions. Here's the opening of Super Mario Bros. 3:

This changes the dynamic of the entire franchise, implying that everything happening onscreen is actually a staged show for an audience. I guess that explains why Mario and Bowser are arch-nemises but then they go golfing and go-karting together the next day. The Paper Mario spinoff series would take the theater concept a step further and actually show the audience watching your gameplay.

When Nintendo finally took the leap to 3D with the Nintendo 64, it launched with the seminal Super Mario 64. The game didn't hesitate to introduce players to the third dimension immediately: the title screen consists of a giant three-dimensional Mario head that you could poke and prod to your heart's content, showcasing the new console's graphical capabilities.

Fast forward to the twenty-first century. Modern games do all sorts of nifty things with their title screens. My favorite in recent memory is Yager Development's Spec Ops: The Line.

At first glance, Spec Ops is a generic dudebro military shooter like Call of Duty and Army of Two. But as I've written about here and people have talked about elsewhere, it's much, much more than that. The title screen captures it perfectly. On the surface it seems like a standard war-torn Middle Eastern background. But huh? The American flag is upside down! The title screen changes depending on how far into the story you are, and the music... is Jimi Hendrix's famous live performance of "The Star-Spangled Banner." In the late '60s it sparked huge controversy, seen as a twisted version of patriotism and a commentary on the Vietnam War. Spec Ops is in many ways a modern-day adaptation of the iconic Vietnam War film Apocalypse Now, so the song fits the game on multiple levels.

Do we need title screens in 2014? No. Do we want them? I couldn't live without their logo-filled goodness. What do you think is the role of the title screen in modern gaming? What title screens are particularly memorable to you?
by Unknown at 12:12 PM