Space Dandy is a look into the future of entertainment

Note: This is the first post by new contributor Tim Sebring! -Jake

Last summer the world got rocked by Guillermo del Toro’s epic Pacific Rim. It was about giant robots punching giant monsters and was well received by critics who praised the visual effects and the general aesthetic of the film.  The same couldn’t necessarily be said of the US box office response. The film’s American take was only about $101 million, $89 million short of its original production costs.  In the movie industry of only a few years ago, this would have been a very bad thing.  Pacific Rim would’ve gone down in history as one of those legendary sci-fi flops in the vein of Battlefield Earth or Lost in Space.  But then China happened. The international box office happened, and the film proceeded to make three times its domestic profit abroad. 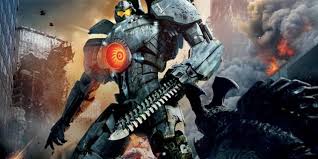 This makes sense in context of the movie itself.  Pacific Rim was compared to Independence Day when it was first released both in tone and because the two share a number of archetypical story beats.  Both are about an alien invasion and the united human effort to defend the world from total destruction. That said, Independence Day is very much an American affair.  The story takes place exclusively within our borders (barring a few sequences depicting what’s going on around the world) and the main characters are all red-blooded Americans.  Heck, it’s even implied that the entire world is basically waiting for the United States’ go-ahead to actually start fighting back against the invaders.  The film tries to salvage that in the late game when Bill Pullman’s President makes a speech citing that the date of the Fourth of July will no longer be just an American holiday, but the sentiment rings false. None of this is to say Roland Emmerich made a bad movie, far from it, but when it’s contrasted against Pacific Rim, the difference is staggering.  Pacific Rim is a truly international film with a Spanish director, a British man and a Japanese woman for leads, and an American studio.  Furthermore, it’s a global story about an international effort to punch giant monsters with giant mechanical fists.  This unified front approach even comes through in the story proper as every character provides something to the fight.  The pilots do the actual punching, sure, but every engineer, and mission control guy has a role to play.  Hell, even the Australians’ bulldog is there for moral support.  The whole affair isn't perfect (America still saves the day in the end) but it's a step ahead of something like Michael Bay's Transformers films.  This approach defines Pacific Rim and it helps it to stand out from the crowd of other sci-fi action flicks regardless of its impressive visuals.

So what does any of this have to do with Shinichiro Watanabe’s newest anime?  Space Dandy seems poised to follow in Pacific Rim’s footsteps as a truly international piece of media.  Watanabe clearly has a fondness for American culture.  Cowboy Bebop was more or less a fusion of American jazz music, Spaghetti Western story beats and the action sensibilities of a Bruce Lee movie while Samurai Champloo was a love letter to hip hop and rap with a Samurai-flavored coat of paint.  Space Dandy meanwhile seems to take this to the next level.  At first glance the series has a strange palette that it’s drawing from.  The series is equal parts Buck Rogers-esque science fiction and…South Pacific aesthetics?

This might not make a lot of sense at first glance, but it’s actually quite clever on the designers’ part. For a while just after the Second World War, there was a surprising jump in interest in areas like Hawaii and Micronesia.  A lot of this came from American servicemen coming back from the Pacific Theater of war and bringing their newfound fondness for the region with them.  This is the era of tiki bars, beach movies (like Elvis Presley’s 1961 classic Blue Hawaii) and Don Ho.  That the fad became popular in the same time period as ray guns and flying saucers is coincidence.  But more importantly, Watanabe combines the two to create unified look for Space Dandy. Take for example the protagonist, who is also named Dandy (who is a dandy guy, in space).  Dandy is clearly styled as an exaggeration and arguably a parody of various divergent bits of Americana, again mostly from the 1950s.  His primary inspiration is American classics like the Fonz or Dean Martin, but that’s just the tip of the iceberg.  Dandy’s jacket is designed to look like a high school letter jacket, he’s constantly combing his hair much like the stereotypical greaser, and even his boots are arguably a reference to the steel-toes of the American cowboy archetype.  None of these things should work in tandem, much less in an anime, but they all do extremely well because Dandy himself is a master-class in character design.  He’s more or less Buck Rogers, if Buck Rogers was a high-school football quarterback who bragged about his muscle car and wanted to jump the canyon to prove it.

This isn’t anything new.  Cultural give and take in media, especially between the United States and Japan, has been going on for a long time.  Akira Kurosawa, one of the most important international film directors ever, was inspired by everything from westerns to Shakespeare (two of his films, Throne of Blood and Ran, are direct adaptations of Shakespeare, albeit ones that are very Japanese).  In turn, Kurosawa’s work, especially his samurai flicks, inspired Italian filmmakers to recreate his works as Westerns.  Serge Leone’s remake of Yojimbo was called A Fistful of Dollars and would go on to become the first in the Dollars Trilogy, the quintessential Spaghetti Western series.

But Space Dandy is different.  Despite being a wholly Japanese creation, the series premiered in America and on Cartoon Network’s Toonami block no less.  If there’s a more visible vector to show anime on, I’m unfamiliar with it.  In this regard, Space Dandy is one of the first anime to be made with an international audience wholly in mind.  I’d even go far as to say that Space Dandy will be more popular in America and outside of Japan in general because of its stylistic touches and that Watanabe is completely fine with that.

Stuff like Pacific Rim and Space Dandy are symptomatic of the future of media.  We’re going to stop seeing movies made explicitly for American audiences or anime that doesn’t even consider the existence of foreign markets.  And the change is already happening.  Earlier this month, Dhoom 3 became the first Bollywood film to break into the American top ten just as an example for the here and now.  That said, there are barriers that are currently keeping this from being an actual reality.  Things like region locking or staggered release dates are doing more harm than good at this point, but such things are relics of the past.  The future of pop culture looks great for reasons like this, and I’m excited to see where it’s going.
by Tim Sebring at 7:12 PM