Frank Miller, Daredevil, and my problem with Batman

I have mixed feelings on Batman. Gotham is an ultraconservative's wet dream, a dystopian world where the unwashed masses of the city can't depend on Big Government to take care of them. They turn to a suburban Old Money libertarian to rise above the law and save the urban plebes from themselves. Christopher Nolan's recent film trilogy capitalizes on this interpretation of the character, and Scott Snyder's current run on the Batman comic does the same.

Or he's just a goofy guy in tights who lives with a young boy and butler/father figure. The 1960s Adam West TV show uses this iteration of the character, from the Silver Age Batman comics.

Frank Miller's work on Batman in the 1980s was pivotal in establishing the Serious Business version of the caped crusader. 1986's The Dark Knight Returns is one of my all-time favorites. I recently got around to reading 1987's Year One, but I came away with a foul taste in my mouth even though it's cited by many as the definitive Batman origin story and one of the best comics of all time.

I absolutely love Year One's art, by illustrator David Mazzucchelli and colorist Richmond Lewis. Both artists previously worked with Miller on Daredevil: Born Again the year before, and while Born Again is a great story, the art takes a huge step forward in Year One. The difference is Lewis' coloring, which she re-did for the collected edition release. Colorists are often overlooked in comics, but she made a huge difference here.

That leaves Miller's script as my source of Bat-strife. He's one of the most influential comic book creators of all time. What happened?

Batman and Daredevil are very similar characters. Both are orphaned rich guys who spend their free time fighting crime in gritty urban locales, both wearing costumes that use traditionally evil imagery. But while Daredevil is a hero of the people, Batman is only a hero for the people.

Daredevil's alter ego Matt Murdock was born and raised in the rough Hell's Kitchen neighborhood in Manhattan. He grew up poor, but got into law school and worked his way up the social ladder. Nevertheless, he remains connected to Hell's Kitchen, and does the majority of his crime-fighting there. In Born Again, Murdock constantly talks about how despite the rampant crime and poverty in Hell's Kitchen, it's still his beloved home.

Batman's alter ego Bruce Wayne grew up as part of Gotham's upper crust. Though he fights crime in the inner city, he lives on the outskirts at Wayne Manor, far away from the riffraff downtown.

Batman feels so disconnected to his city that Year One's very first page opens with police commissioner Gordon complaining about it: 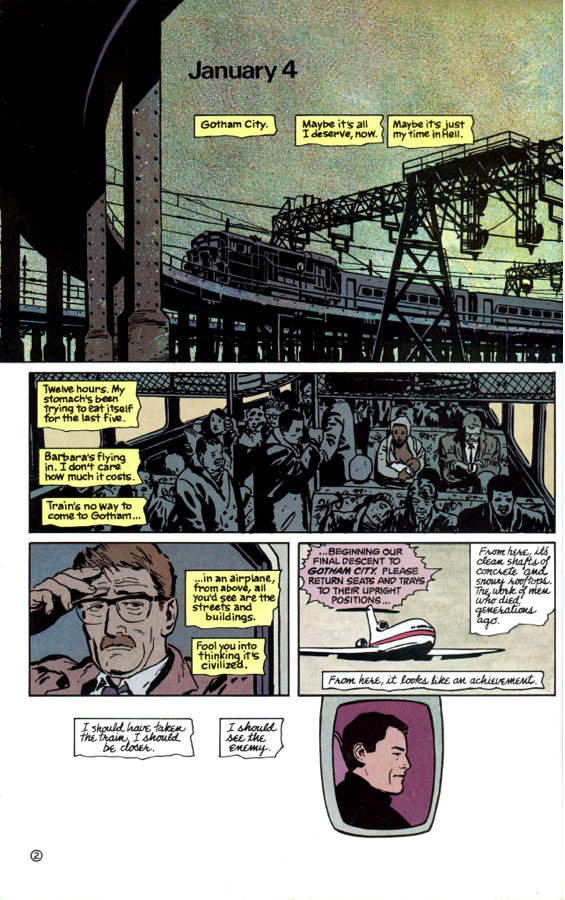 "Gotham City. Maybe it's all I deserve, now. Maybe it's just my time in Hell... in an airplane, from above, all you'd see are the streets and buildings. Fool you into thinking it's civilized."

On the same page, Bruce Wayne is siting on an airplane. He opines:


"From here, it's clean shafts of concrete and snowy rooftops. The work of men who died generations ago. From here, it looks like an achievement. I should have taken the train. I should be closer. I should see the enemy."

Miller presents this as Gordon dreading his return to Gotham while Wayne relishes his. But is Wayne really looking forward to being in his city again? He's saying the city hasn't advanced since the Good Old Days, and he wants to be closer to Gotham not to see his friends and family or to see the sights of the town, but so he can "see the enemy." Even in his praise of Gotham, he talks about how much he loathes its residents. 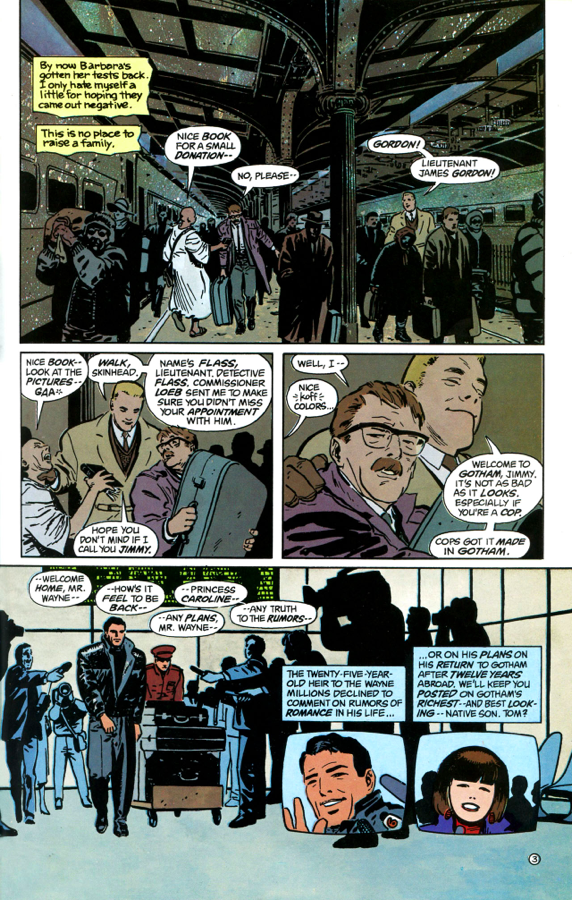 Gordon goes on to lament the fact that his wife got pregnant on his return to Gotham.


"By now Barbara's gotten her tests back. I only hate myself a little for hoping they come out negative. This is no place to raise a family."

A man whose job it is to serve and protect the people of Gotham has no desire to raise a family there.

Wayne, on the other hand, is 25 years old when he returns to Gotham, after spending twelve years outside the country. So having a 13-year-old's view of the city, he decides to come back after over a decade abroad to a city he thinks he knows, to beat up some Gotham City denizens?

Matt Murdock acknowledges the danger and decay in his city, too. For the first half of Born Again, Murdock is broke and homeless, wandering around NYC. 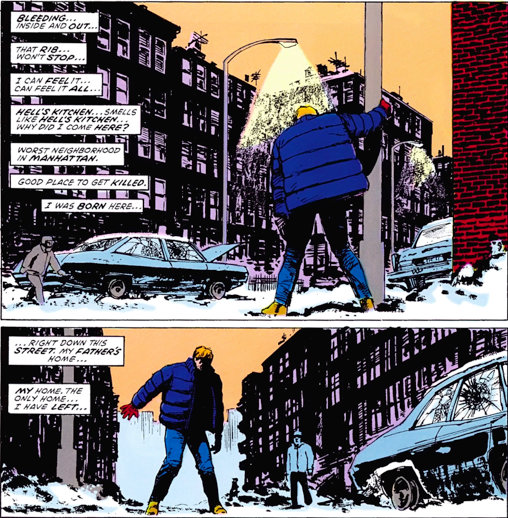 "Smells like Hell's Kitchen... why did I come here? Worst neighborhood in Manhattan. Good place to get killed. I was born here... right down this street. My father's home... my home. The only home... I have left..."

At his lowest point, Murdock embraces his town. Instead of escaping to somewhere else, he literally sleeps on the streets of Manhattan. Near the conclusion of Born Again, he even gets a job flipping burgers in a greasy Hell's Kitchen diner. 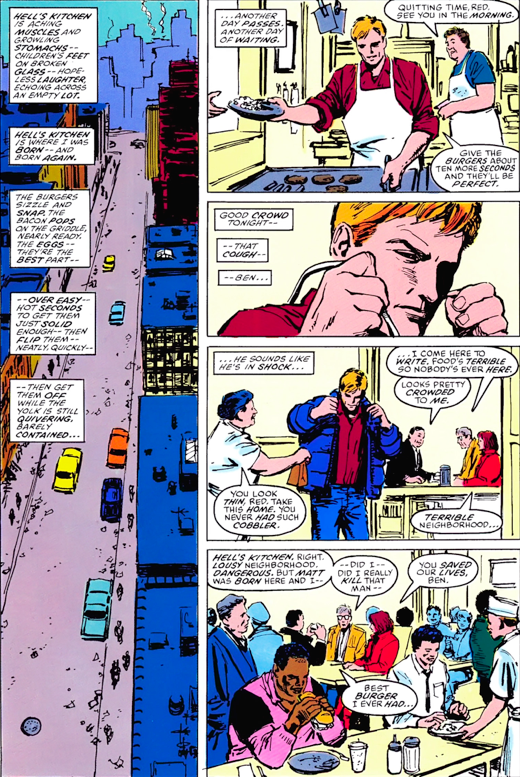 And at the end of Born Again, once Daredevil has saved the day and put his life back together, the final panel is Murdock cheerfully walking down his street. The last line of the book: 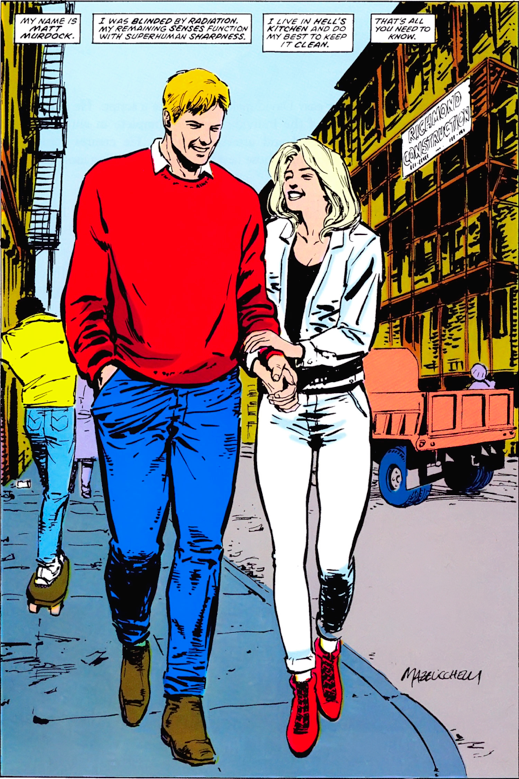 "I live in Hell's Kitchen and do my best to keep it clean. That's all you need to know."

Super cheesy artwork here, but it gets the point across. Ultimately, Batman presents a pessimistic view of the inner city, and Daredevil is an optimist.

Meanwhile in Year One, when Bruce Wayne is trying to escape the bad guys, he lets us know "Wayne Manor is miles from Gotham. They'll take a few minutes to get here."