A Historical Primer for 300: Rise of an Empire

So 300 is getting a sequel called 300: Rise of an Empire.  That’s weird to me on a few different levels, but I’m also surprisingly excited to see it.  I wasn’t a huge fan of the original movie, but I appreciate it as a modern progression of the swords-and-sandals epics of old.  Some of you may be asking what this movie will actually be about.  300 ends with a fairly concise conclusion, because they all died.  Where can the movie go from there?

Judging from the trailers, the vast majority of the movie will be centered on a naval conflict between the Athenians and the Persians.  The main hero is an Athenian commander played by relative unknown Sullivan Stapleton and his main opponent seems to be Eva Green as one of the main villains for the piece.  What does any of this mean?  Let’s get started with who our main characters are and go from there. 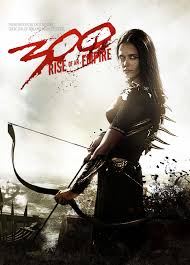 According to casting information, Green will be playing Artemisia I, who was the queen of the Satrap of Caria.  Satraps were more or less the provinces of the First Persian Empire.  It’s worth remembering from history class that one of the things that made the Persian Empire so effective was that when they conquered a region, they would generally leave the local hierarchies intact.  The region was still under Persian rule and benefited from the resources of the Empire like a massive network of paved roads, but apart from paying taxes and contributing troops to war efforts, kingdoms were more or less autonomous.  After all, who knows how to run a region better than the people who were already running it?  In short, Xerxes really wasn’t kidding when he told Leonidas he would make him a king in the last movie. That was his best administrative tactic.

Anyway, Artemisia was the effective queen of Caria, a region in western Anatolia (modern day Turkey).  In his histories of the region, Herodotus noted the amount of influence she had on King Xerxes, providing him with counsel and insight during his reign.  So yeah, there’s your femme fatale for the movie. Artemisia ascended to the throne following the death of her husband and despite being of Grecian descent herself (her mother was from the Greek isle of Crete), she allied herself with Xerxes during the Second Greco-Persian War.  Her most well-known contribution to the war effort was serving as one of two Persian commanders at the Battle of Artemisium, opposite the Athenian general Themistocles.

Themistocles was an Athenian politician of whom we know very little prior to his rise to prominence.  We have only vague descriptions of his father as a “not very conspicuous man,” and we know even less of his mother.  He grew up during a mercurial period of transition for Athens.  The failings of the current ruling class and a costly war with Sparta had decimated the Athenian government system and the city’s people had decided to implement a new form of government known as democracy.  Having risen from the gentry, Themistocles proved himself a natural born politician who danced rhetorical circles around his old guard opponents.  Luckily he was also a populist, and used his power to give the common man a voice.  Using these talents, Themistocles was able to ride a steady wave of successes until he was promoted to archon (full title Eponymous Archon) or effective ruler of Athens.  He also fought in the first "phase" of the Second Greco-Persian War, possibly even as a general at the decisive Battle of Marathon.

In 481 BC, the Greeks learned that the Persian Empire had once again turned its eye their way.  Roughly 30 city-states allied themselves to organize a defense against any Persian incursions.  The two city-states to lead this alliance were Athens and Sparta, both of whom were sworn enemies of Persia.  The Spartans almost immediately laid their claim to command of the land battle, and nobody was really keen to stop them since it was effectively impossible for the other city-states to beat Sparta on land.  Once this was decided, 10,000 hoplites under the joint command of the Spartan polemarch Euenetus and Themistocles marched to the Vale of Tempe to await the Persians. However, in a surprising turn of events, Alexander I of Macedon informed the allied states that it was possible (and indeed more tactically sound) to enter Greece through other, more discrete routes.  Soon after, the alliance received even more dire news: Xerxes and his forces had crossed the Hellespont, a strait that connects Turkey to Greece.

As the combined forced raced back to the city-states to defend their land, it was clear the Alliance was on the verge of breaking.  It was here Themistocles took center stage.  Themistocles had developed a second strategy to defend the peninsula.  He pointed out that Xerxes’ land force needed to pass through the narrow pass at Thermopylae and argued that a small force of hoplites could defend the pass while the massive Athenian navy, which Themistocles had assembled for just such an occasion, could meet the Persian navy off the coast. While the Spartan king Leonidas took a force of Spartan hoplites, Helots, and a number of other support forces from across the Alliance to the pass, Themistocles and two other Athenian generals took to the seas to meet the Persians.  This resulted in two naval engagements: the Battle of Artemisium, which was a loss for the Greeks after three days of brutal fighting, and the Battle of Salamis, which turned the tide of the war.  So that’s probably what Rise of an Empire will be about.

On one hand, I’d wager the film will feature the Battle at Salamis exclusively because the narration in one of the trailers indicates that the events of the story are taking place after the Battle of Thermopylae much like Salamis did (Artemisum was concurrent with the Battle at Thermopylae).  On the other hand, what makes Salamis interesting as a battle hinges on the eventual defeat at Artemsium.  Either way, this is why I’m excited for 300: Rise of an Empire.  Part of what made the original 300 such a slog for me was that you could tell just how artificial the fights were. Ground wars in ancient Greece usually weren’t that…dynamic.  In contrast, ancient naval engagements were brutal, drawn-out and very violent.


The weapon of choice for any ancient navy was the trireme, a long ship with a pair of triangular sails supported by three decks of men rowing with long handled oars.  Triremes were fast and maneuverable by the standards of the time but they lacked a key element that is necessary for naval combat, namely on-board ranged weaponry. As such, the primary tactic of the time was to ram and board the enemy vessel, which triremes were very good at.  The prow of a trireme was designed to be a massive battering ram, and if anything else had been sacrificed to make the ship faster, then it would have compromised the ship’s integrity.  Furthermore, each trireme was staffed by a contingent of marines who would jump between vessels and engage the crews of other ships as soon as their ship plowed into another, assuming the other one hadn’t been smashed into splinters already.  So apart from the visual saturation and Snyder’s signature hyper-violence, you can bet what you see in 300: Rise of an Empire is more or less what actual naval warfare was like in 482 BC.  And it should be awesome.  Despite all my hesitancy about the movie, that's what will make it all worth it, at least to me.

Email ThisBlogThis!Share to TwitterShare to FacebookShare to Pinterest
Labels: 300, 300: Rise of an Empire, Battle of Artemisium, Battle of Salamis, Themistocles