Dubai, Jimi Hendrix, and late to the Spec Ops: The Line party

Everything I'd like to say in a traditional review of first-time German studio Yager Development's Spec Ops: The Line has been written elsewhere. The game came out last June, so I'm a bit late to the cult-following party. Suffice to say it's one of the best games I've played in years. 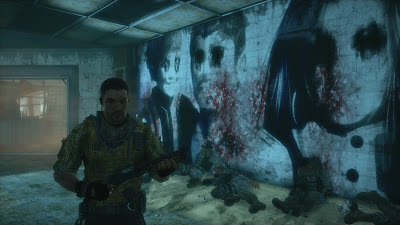 If you haven't played The Line yet, the best way to experience it is by not reading anything about it beforehand. So please stop reading this. Just go play it.

If you've already played it, you've likely already read the great analysis by Tom Bissell and the in-depth spoiler-filled interview with the game's designers at Polygon. You've probably also watched the two-part video analysis of the game by the folks at Extra Credits.

So here are just a few things I thought I'd add, things I haven't seen many people talk about or just things I felt particularly strongly about. I'll try to keep it as spoiler-free as possible.

Dubai as the setting. Too many military shooters are set in ambiguous Middle Eastern non-countries. Spec Ops: The Line specifically chooses Dubai as its locale, and takes full advantage of its cityscape and geopolitical importance. Dubai is different than any other major Middle Eastern city, a Western-style spectacle of a manufactured metropolis. The city becomes a character of its own in The Line.


Beyond military shooters, far too many games in general take place in fictional non-places. Games that do choose to have a strong sense of location benefit exponentially from it. Whether it's Washington, DC in Fallout 3 or small-town Washington state in Deadly Premonition, when the player feels connected to the setting in a game it immerses us and makes us want to spend more virtual time in that place.

Why aren't more game soundtracks released commercially? Spec Ops: The Line features an eclectic mix of licensed music, everything from Alice in Chains to Björk to Mogwai to Nine Inch Nails.  The juxtaposition of the music with the gameplay makes it that much more disconcerting and memorable. Speaking of the licensed music, 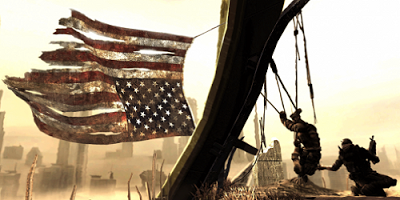 Spec Ops: The Line has one of my all-time favorite main menu screens. It features the Dubai skyline as seen from up high in a bombed-out skyscraper. There's a torn, upside-down American flag hanging from the building. Each time you load up the game, there's a chance of seeing a slightly different scene on this skyscraper.

And the main menu music tops it all off. It's Jimi Hendrix's famous 1969 live rendition of "The Star-Spangled Banner" at Woodstock. The song was controversial when he played it because he distorted and warped the song as a protest of the Vietnam War. It presented a twisted sense of patriotism. The fact that Yager Development decided to use this for the menu music of The Line is brilliant. Speaking of game menus,

Spec Ops: The Line has passive-aggressive loading screens. I don't want to ruin it too much, but what comes off initially as generic loading screens with tips and hints, like most other games, eventually turns into something more... complex... as the game goes on.

But The Line isn't perfect. My biggest issue with the game is a common problem I have with narrative in games: the cutscenes take me out of the experience.

The game has great cutscenes by gaming standards. But the fact that they're there at all bothers me. The biggest theme of The Line is guilt and responsibility. Games as a medium are uniquely positioned as an art form to make the audience feel personally responsible for the protagonists' actions, since unlike in film and literature, the audience is an active participant in the story.

I realize cutscenes are a necessary evil in many games. It's hard to create cinematic storytelling without taking some control away from the player so the characters can do things they couldn't normally do in gameplay. But cutscenes should exist only when the characters are doing things they couldn't do through normal gameplay. If it's a scene with the protagonists walking down a street, I'd like to have control over that walking so I feel I'm part of the story. Cutscenes should only be used when absolutely necessary. Spec Ops: The Line is better than most games at this, but it could've been perfect. It reminds me of another European cult classic shooter, Metro 2033, in this regard.

Overall, though, I love Spec Ops: The Line. If I had gotten around to playing it when it came out last year, it would've definitely been on my Best Games of 2012 list.
by Unknown at 2:20 PM