Daredevil breaks my heart: Black Cat and sexism in comics

As I've said before, I don't pretend to be a comics expert. I just started reading them in the past month or so. But a quick google search of "comics sexism" brings up an embarrassing 2.82 million results as of this writing, so I'm not alone in thinking it's an issue the medium must deal with. 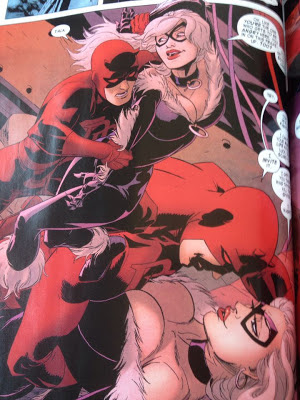 So far in my short comic-reading career, I'd avoided anything overtly sexist. And I absolutely loved the first collected edition of Mark Waid and Paolo Rivera's Daredevil. But then I got to Daredevil's two-part crossover with Amazing Spider-Man.

The crossover revolves around Daredevil and Spider-Man teaming up to deal with the Black Cat. It's the first appearance of a female costumed character in the series, and Black Cat's depiction is utterly shameful for the twenty-first century.

Neither Spider-Man nor Daredevil have a great track record with respect for women--but that's okay with me, since it's generally presented as a character flaw for both of them. Peter Parker is a hormonal teenage boy, and we all know plenty of those in real life. I may or may not have been one myself at some point. Rich guy Matt Murdock is presented in Waid's Daredevil as a womanizer in the Mad Men vein, fitting of Paolo Rivera's retro art during his tenure working on the series. Maybe it's telling that as soon as Rivera stopped doing all the artwork for Daredevil, we got this sexist crossover.


None of it is necessarily sexist as long as the women they interact with are depicted as complete characters. But Black Cat's unrealistic proportions and fetishist costume are unfortunately par for the course in comics. Just look at that suggestive S&M collar and the invitingly large "undress me" zipper pull on her black leather onesie. Why does the zipper need to go all the way down to her vagina, anyway?


Of course Black Cat only exists in the series as a sexual object for Spider-Man and Daredevil. And in nearly every single panel that she appears in Daredevil #8, she's standing in a sexualized position, even when she's not doing anything sexual. 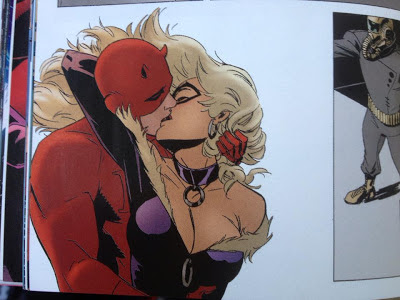 Have you or anyone you know ever done this in real life? It just looks awkward and uncomfortable. The only reason she does it is so you, the presumably straight male reader, can ogle her boobs.

I've got no issue with the concept of sexy women. I love sexy women. But when you see a sexy woman in a movie or on TV, even if it's demeaning, you know there was a real-life woman who consented to it.

When you see a sexy woman in comics, however, there's a good chance no real-life woman was involved in any part of the process of creating her. Black Cat was drawn by a man: the art for this issue was done by Kano (who is a man). There's something particularly gross about men drawing women for other men to ogle. It's a male masturbatory fantasy. And there's something very un-sexy about that. Perhaps they're simply overcompensating for the undeniable homoerotic undertones of male-dominated comics celebrating the muscled bodies of Men in tight spandex?

In Daredevil's defense, during Paolo Rivera's run on the series we're introduced to romantic interest Kirsten McDuffie who's much more realistic. Even when she becomes an object of sexual desire, it comes off as more respectful because of the earlier non-sexualized encounters with her.

With Black Cat, however, we never get to see her in a non-sexual light. I would place all the blame on one-off artist Kano, but while Rivera is absent from Daredevil #8, it was still written by longtime writer Mark Waid. Waid, who's held up by comic enthusiasts as one of the most talented in the industry, gets the blame as well.

Let's back up for a second. The first part of this crossover, Amazing Spider-Man #677, was also written by Mark Waid. But while his writing still presents Black Cat as a sexual object in the issue, the art for the issue was done by Emma Rios. Who is a woman. Look at the closing page of the issue. 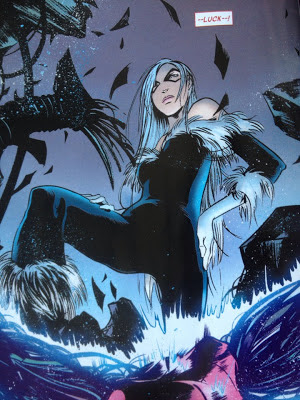 Black Cat is still "sexy." She still wears a low-cut black leather outfit, but it's more realistically proportioned and she's presented as much more in control of her own body and sexuality. This is why we need more women in comics.
by Unknown at 11:44 AM