Speaking of games of Czech origin, nothing exemplifies the quiet Eastern European beauty of Czech design than the work of Brno-based studio Amanita Design. At the cutting edge of the point-and-click revival we've seen in recent years, Amanita is known for its free browser-based game Samorost and its sequel, but its most iconic title is their first full-length game, 2009's Machinarium.

Machinarium is a classic point-and-click puzzle adventure, the story of a robot named Josef (named after Josef Čapek, creator of the word "robot") who explores a mystery-filled city populated by robots. There's no language barrier here, as there are no words through the entire game. The plot is moved forward purely through visual cues. 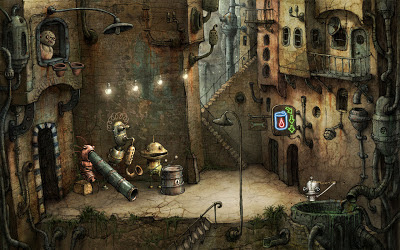 Since it's a "classic" point-and-click game, Machinarium also features some "classic" point-and-click difficulty with a few obtuse puzzles as frustrating as anything from the '90s. The hint system is helpful, but I can't help but feel like that's cheating a bit. Regardless, Machinarium is a gorgeous hand-drawn game with a soundtrack I still listen to nightly when I'm in bed.

View Global Gaming Spotlight in a larger map
by Unknown at 3:04 PM