Being decisive is not my forte, so determining whether something is the greatest of all time or even game of the year is much more challenging than even a timed underwater escort mission for me.  Thankfully my love of professional wrestling presented a solution to my issue of making declarative statements about my preferences for things.  Booker T, the five time WCW champ, has gifted unto me the “Fave Five, dawg,” a collection of 5, really this is just a broad approximation because who is to say how many five really is dawg, things he likes most at any given time.  In this case I shall borrow the concept of the Fave Five and apply it to the year 2012 and the media of various types released therein.

One of the things that fills my life with meaning and gives me reason enough to wake up the next morning are giant robots, and few mediums provide the necessary daily dosage of mecha quite like Japanese animation.  So allow me to present my Fave Five shows of 2012, oddly enough a list pretty lite on the mecha front.

Osore!  The story begins 12,000 years after the events of Genesis of Aquarion, a series more notabable for its theme song than anything else, and follows a somewhat similar format.  An academy of gifted youngsters is tasked with the mission of defending their home planet from invaders.  To accomplish this task they utilize 3 jets that can combine into the titular mech the Aquarion.  The show is a twisting tale of gender relations and previous lives, which causes nearly all the conflict that occurs in love and war.  It is even more ridiculous than it sounds as it is quickly established that there are no rails where we are going, this unsurprisingly leads to a trainwreck of an ending.

Despite the disappointing destination, the journey itself is incredibly fun.  The cast of confused youths engage in a number of humorous antics in their school setting (something I enjoyed quite a bit, but a past version of myself would have scoffed at).  There is a wise and mysterious mentor character that has a some unexplained connection to past events that speaks in truly strange riddles and assigns inane tasks with a hidden deeper meaning.  To top it off the fights between mechs ,despite being 3DCG, are well done and usually culminate with a truly zany finishing move that you can't help but "hell yeah" at, one such attack was the "banana punch".  All in all it's not the best show or something that I would necessarily recommend but it was fun enough to keep me waiting on the latest episode.

4. Horizon in the Middle of Nowhere 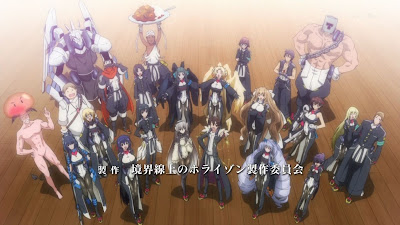 Season two of Horizon in the Middle of Nowhere picks off where the previous season left off with the citizens of the flying sky-ship city Musashi on the run and in search of the mortal sin armaments.  The story is set in a vast world merging technology and magic.  The denizens of this world seek to avert the apocalypse by reliving events of the past.  This results in characters taking up the mantle of real historical figures but in the trappings of a world ripped from a Japanese role-playing game.

It is a twisted and complex story, not due to any pretentious deepness but simply because of a seemingly endless number of storylines and parallel plots; an experience that is sure to be rewarding if you can keep up with it all.  The burden of this bloated story is lessened by eclectic cast of characters that seem to span the entire spectrum of tastes, interests, and character classes/profession.  Seriously, it would be surprising for someone not to find a character that they like or identify with.  This list is quickly becoming a collection of my guilty pleasures, but how could I not include a show that counts a ninja with an emotive hat and a skeleton that wishes people to "Have a nice death," as cast members in my fave five.  Also mecha-MacBeth vs. mecha-King Lear is a thing that happens. 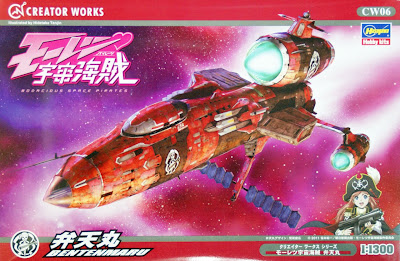 Sure Bodacious Space Pirates is about a high school girl taking the reigns of her late father's pirate ship and focuses on her yacht club as they learn how to effectively operate a space ship.  But don't judge me because it's not all just cute girls doing cute things.  There is a great deal of methodically paced and technobabble laden "hard-sci" drama.  The battles between space ships are few and far between as traditional piracy has given way to a new form of piracy that is more about putting on a good show for the victims, who might only lose a valuable or two that their insurance company will reimburse them for.  When there is actual ship to ship combat it usually takes the form of electronic warfare and does not deal too much with laser or missiles being fired.

The scientific tone in which the overall setting is handled might seem to clash with focus on a high school girl and her friends, time is spent with the pirate crew too.  However the school and club segments do not appear to be designed to be full of fanservice like the standard anime fare which makes it palatable and not entirely embarassing to watch.  Space Pirates ends up being a low key character-centric series wrapped up in a space operatic package, and I enjoyed every minute of it. 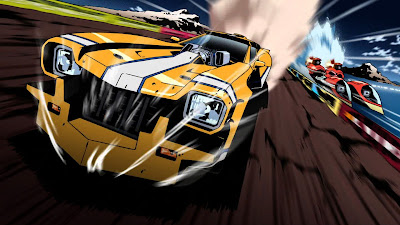 I feel like I'm cheating by including Redline since due to a troubled production cycle it has actually been shown at a few film festivals prior to this year, but it didn't see DVD or Blu-ray release until early 2012.  This is a technicality that I don't mind exploiting since it's a piece of animation that anyone should experience, and other more "reputable" sources are including it in 2012 contention though so why shouldn't I?  Redline is frenetic and hyper-kinetic 102 minutes, but such is to be expected when you are making a movie chronically  Sweet JP's attempt at winning the most dangerous race in the cosmos.  Imagine combining Wacky Races and F-Zero then making them 3x faster and you have an approximation of Redline.

Seven years of production can take its toll as there are some issues with the film.  These are easily overlooked as the detailed animation, much of it by hand, sweeps you along as the overall art style hooks you.  There isn't much more to say other than Redline looks really good.  It then plays to this strength to make a supremely fast paced and over the top product that only the stuffiest of boring people cannot enjoy. 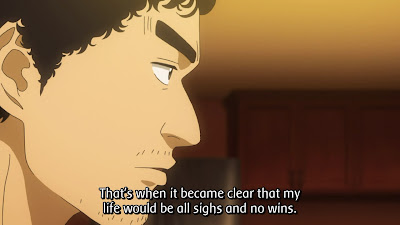 Space Brothers tells the humorously unfortunate story of Nanba Mutta as he struggles to measure up to and overcome his younger brother’s accomplishments, no easy feat when that younger brother is the first Japanese astronaut to walk on the moon.  The trappings of the trials associated with becoming an astronaut are enough to warrant my interests, yet that is not what makes the show so great.  Instead it is the strength of the characters and the overwhelmingly human way they are presented that keeps me coming back every week.

I know I said that I find it difficult to make bold proclamations, but this is definitely my favorite show of the year, and is a GOAT contender.  It seems rather mundane but it’s astonishing how real the characters seem.  They all have their flaws and quirks and despite oftentimes failing, with heartbreaking consequences on occasion, the show never fails to warm my cynical heart as the determination and resolve with which Mutta and others strive for their dreams is enough to inspire nearly anyone, even if these are just fictional characters.  If you were to experience only one thing in my accumulated Fave Fives then I’d say take the time to watch this show.
by Unknown at 4:43 PM