Four years ago, I woke up at 3:30 in the morning to get on the Metro. Every station, every train was packed. My friends and I waited for hours huddled on the National Mall in January cold to watch a speck of a nominee in the distance become the first black president of the United States. It must’ve been the most people I’ve ever seen in one place in my life. 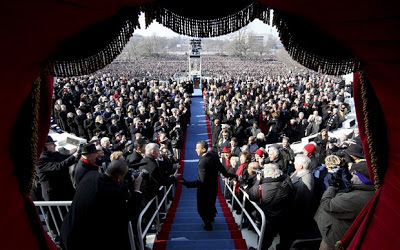 Every newspaper is publishing a story about how four years ago, Barack Obama was a concept, and today he is merely a man. An idealistic candidate eroded down to a graying mortal by four years of stunted Change. Everyone’s pointing out that while D.C. was completely packed for his first swearing-in ceremony, today no one had to wake up at 3:30 to get a spot on the Mall.

On Inauguration Day 2013, I’m nowhere near DC. I type these words on a plane flying from Kansas City to San Diego. I’m four years older and four years more bitter. Is it a dream deferred? Has my enthusiasm for the President waned since 2008, when I was a young student excited to vote in my first election?

He hasn’t closed Guantanamo Bay. He hasn’t ended our Cold War-level military spending. He hasn’t passed comprehensive-enough health care or worked enough on immigration reform. Gay couples in most states still can’t marry, and police still waste time busting pot smokers. Planned Parenthood is still under attack in many parts of the country, and the 600,000 Americans who call Washington, DC their hometown still don’t get any representation in Congress.

I should be the prime demographic for cynicism. I’m a recent college graduate working two jobs I could’ve done in high school to pay rent. As an angry straight white male, I’m exactly the sort of person Republicans (and punk bands?) bank on. But I still believe. Ironically, President Obama may have a better chance of achieving his idealistic goals after his subdued second inauguration than he did after his enthusiastic first.

We’re making slow-but-steady progress on marriage equality and marijuana decriminalization. In the wake of the Newtown shooting, the President is embracing gun control. This past week, Obama finally put DC’s “TAXATION WITHOUT REPRESENTATION” license plates on his presidential limousine, giving hope to over half a million Americans that they can finally have their voices heard. During his inaugural speech today, the President reaffirmed his activist stances on nearly every important issue, including the oft-overlooked crisis of climate change.

I have hope in America. After the reactionary surge of far-right politicians in 2010, I believe today most Americans have come around to the idea of working together for progress. The change we can believe in may be taking longer than anticipated, but Barack Obama still has my support just as much as he did four years ago.