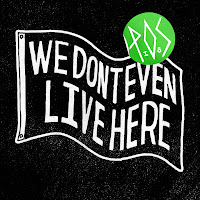 P.O.S has to be one of the most underrated rappers around. He's part of the Minneapolis-based hip hop collective Doomtree, but all his solo work has been lightyears ahead of his collaborators'. The punk rock aesthetic and clever choice of samples makes this an under-the-radar gem.

It definitely capitalizes on the recent trend of electronic dance music much more than his previous albums, but instead of going in the mindless dubstep direction like so many others, We Don't Even Live Here features some fun "dirty" electronic beats like you'd hear from the Chemical Brothers. I first heard P.O.S when I saw him on a whim at Warped Tour 2009, of all places. He spent the entire show not on the stage, but in the middle of the crowd. It was great.

It's impossible not to get caught up in the angel-music that is Sigur Rós, and their new album Valtari is no exception. If you've never heard the Icelandic post-rock band, this is a great place to start. Continuing the "electronica is popular now!" fad, Valtari features more electronic instrumentation than the band's prior work, but in true Sigur Rós fashion, it's not dance music at all--it's simply ethereal.

After frontman Jónsi went on his stint as a solo pop artist, it's great to see him return to his roots without anything being lost in the process. Valtari was promoted in part by an interesting viral film experiment based on interpretative dance, the product of which you can see in the video above.

Speaking of post-rock, Godspeed You! Black Emperor takes it to the next level. The Montréal group pioneered esoteric audio collage-style instrumental music in the '90s, and after a decade-long break in which most people assumed the band had broken up, they came out of nowhere this year with a new album. In true Godspeed style, instead of actually promoting their album, they simply started selling it at a few concerts without telling anyone.

The 20-minute tracks are not for the faint of heart, but it's the embodiment of  "3 AM epiphany" music. If you've never listened to post-rock before, begin with something approachable like Explosions in the Sky or the aforementioned Sigur Rós. Then graduate to the real deal. Godspeed is an acquired tasted, but well worth the wait.

"I Fink U Freeky" by Die Antwoord

After all this pretentious art-rock on my list, of course I had to go with everyone's favorite South African rap-rave group, Die Antwoord. You're never quite sure if they're being serious or a giant inside joke, but Die Antwoord has created some of the most provocative music (and music videos) of the last couple years. I can't gush enough about this group. I love everything about them, from Yolandi's extraterrestrial look to Ninja's DIY tattoos to the group's strange fixation with phallic imagery.

Once again, the rise of EDM has affected an album, as Ten$ion is much more electronic than the band's older work. But they're more serious than ever before. I saw Die Antwoord in concert a few months ago, and it was quite a sight to see a hip-hop group perform a sold-out show in the middle of the United States in which their first four songs of the night were entirely in Afrikaans. Globalization!

"Heart of the Continent" by John K. Samson Provincial isn't experimental or weird. Provincial is largely a collection of acoustic guitar songs about highways in Manitoba. John K. Samson is one of my all-time favorite songwriters as the frontman of Winnipeg folk-punk outfit the Weakerthans, and his new solo album is much more on the "folk" side than the "punk" side.

Samson's lyricism is unmatched by anyone working in music today if you ask me, whether he's singing about playing video games late at night or about misunderstood hockey great Reggie Leach or about writing his master's thesis or about old Norse sagas. Funny that my Favorite Album of 2012 came out all the way back in January. While most of the albums on this list are polarizing, this is one I believe anyone can enjoy. It's just so honest, so earnest, how can you not love it?
by Unknown at 2:08 PM