My five favorite Lego sets of 2012

As some of you may know, one of my day jobs is at Lego. While I don't own all the sets on this list, I spend enough hours per week essentially staring at Lego that I feel I'm qualified to make this decision. 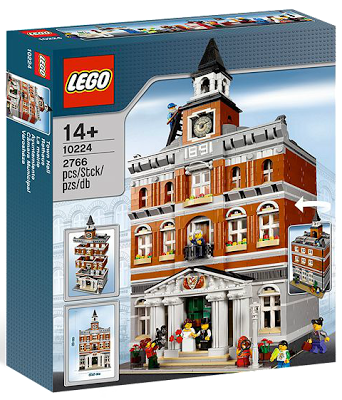 Town Hall is the newest addition to Lego's ongoing modular buildings theme. It's the biggest set in the series, which began in 2007 and has become one of the most popular themes for the sizable adult Lego fan community. The past five years or so, Lego has really begun to acknowledge and embrace the fact that they have so many adult Lego fans, creating many new sets like this one that are aimed specifically at older builders.

These sets are some of the only remaining Lego products with minifigures who retain the classic "two dots for eyes and a smile" face, while most modern minifigs feature a wide variety of facial expressions. Town Hall features a ton of figs and interesting building techniques, like the use of croissants for the city's crest. There's also "1891" on the front to signify the year the town hall was built--coincidentally, 1891 is the birth year of Lego founder Ole Kirk Christiansen. The flat townhouse style is reminiscent of Copenhagen architecture. In fact, the pillars and small balcony where the mayor stands reminds me of Christiansborg Palace, the seat of the Danish government where the royal family stands on the balcony to address their constituents. Overall, a timeless set which reminds me of my months living in Copenhagen. 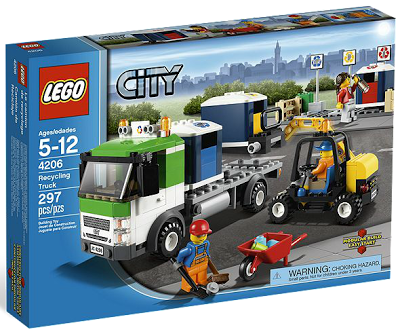 From a 2766-piece building to a 297-piece truck?! The Recycling Truck is a quintessential Lego City design, sure, but what I like about it is what it represents. Through the use of toys and cool vehicles, Lego is teaching kids to recycle. The set features three different recycling bins: one for aluminum, one for paper, and one for glass. There's even appropriate waste included for the minifigs to sort through and put in the appropriate container.

Lego does this sort of thing quite often. For example, none of the Lego Police sets feature any sort of firearms. The crooks never commit violent crimes (they prefer to rob banks and such), and the police simply carry handcuffs. Lego has also gone out of their way recently to include more female minifigs in traditionally male roles, like female firefighters and astronauts. Lego has historically struggled with gender equality in their sets, but today nearly any set that features multiple minifigs is bound to include ladies. Recycling Truck is no exception. 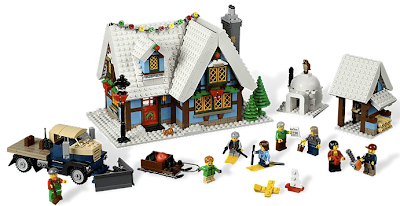 Since 2009, Lego has released some sort of Christmas-themed village set once a year. There's so much going on in the Winter Village Cottage, it's hard not to love it, from the brick-built toy plane and toy sailboat (toys of toys... meta) to the cleverly-designed choppable firewood to the igloo with a smokestack (huh?!).

This set is great for adult Lego fans and could even double as one of your grandmother's holiday decorations around the house. In an age where so many Lego sets feature action and combat, it's nice to see a quaint, colorful winter scene. 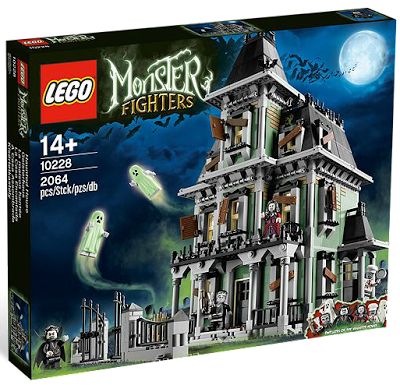 I guess I like buildings, eh? I'm torn on Lego's new Monster Fighters theme. On one hand, it's one of the best Lego themes in years, collecting all the classic Universal monsters like Dracula and Bride of Frankenstein and creating a theme around it. But as I mentioned earlier, there's this fixation with combat and always creating "good guys" and "bad guys." So of course instead of making a series simply called "Monsters," they had to make it "Monster Fighters" and add a host of arbitrary Good Guys who aren't nearly as interesting as the monsters themselves. Luckily, the biggest set in the series smartly abandons the good guys altogether for a spooky fun time.

Strangely enough, in Lego's 80-year history, this is their first-ever attempt at a haunted house. The designer did a great job of recreating a delapidated look for the mansion, hard to do with perfectly-uniform Lego bricks.  And of course there are the glow-in-the-dark ghosts, based on iconic minifigures from the '90s. My favorite part of these ghosts is that they don't actually look like spectral spirits, but instead look like regular people wearing white bedsheets on their heads like everyone's childhood Halloween costume. 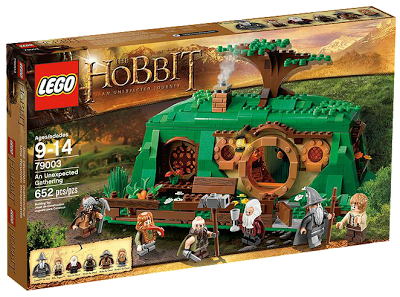 Being the Tolkien nerd I am, this was predictable. Or was it? Much like the novels and films they're based on, the Lego The Hobbit sets are great, but not as iconic as Lego The Lord of the Rings. This is the one exception, and coincidentally, it's a set that could work for either The Hobbit or Lord of the Rings. Bag End in Lego form is absolutely flawless.

First of all, the color scheme is fantastic. While many LotR and Hobbit sets feature gray bricks, gray bricks, and more gray bricks (fifty shades of gray?), here we've got a predominantly grass-green set, rare for any Lego theme. And while many official Lego sets eschew the classic 2 x 2 and 2 x 4 Lego blocks of our childhoods for specialized angle and slope bricks, An Unexpected Gathering features tons of classic blocks in the hobbit hole's structure. 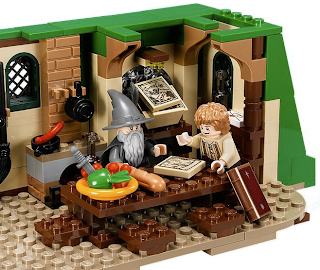 This is true of the whole design. While Lego was infamous for its specialized pieces a few years ago, they've recently moved towards innovative design using existing elements. Take the fence around Bilbo's house, for example. A few years ago, this probably would've been made of specialized brown fence pieces. Today, though, it's entirely brick-built of existing Lego parts.

That's not to say the set is stuck in the past. Bag End's big circular window is a stroke of genius which no photographs adequately capture. You actually build the window sideways using the bases of standard 2 x 2 spinner plates (without the spinners). Who thought of that?!

In true hobbit (and Danish) fashion, Bag End is incredibly cozy. It may feature the most Lego food ever included in a Lego set, and the dining room clearly evokes the warm feeling portrayed in Peter Jackson's films. Plus there's the creative design of all the dwarf minifigs, with fat Bombur in particular being my favorite. Overall, this is a must-have set if you're any sort of fan of Lego or Tolkien.

Lego knew this was the greatest set of 2012. Did you see their life-size rendition of Bag End? Not a recreation of Bag End as it is in the movies, but of their own An Unexpected Gathering set. Lego of Lego indeed.
by Unknown at 3:47 PM

Email ThisBlogThis!Share to TwitterShare to FacebookShare to Pinterest
Labels: best of 2012, Denmark, Lego, Lego City, Lord of the Rings, LotR, Monster Fighters, The Hobbit, The Lord of the Rings