The Avengers ruined Spider-Man for me.

I didn't grow up reading comic books. But I'm a fairly nerdy person, and all "geek" culture owes itself to comic books--the original geek culture. Although superhero movies are more popular than ever, superhero comics remain a niche market. So I decided I should start reading some.

Coming of age in the early '00s, I've got a soft spot for Sam Raimi's Spider-Man film trilogy. Yes, I even thought Spider-Man 3 was decent, but that's a debate for another day. So I decided to start my comic book career with Spidey. But even narrowing it down to one superhero, how do I dive headfirst into comics' infamously complex web of multiple continuities and crisscrossing storylines? 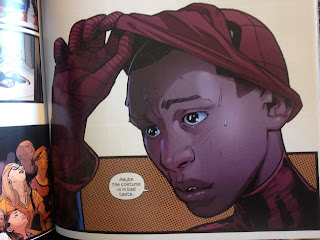 I remember hearing back in late 2011 that Peter Parker died, and there was a new Spider-Man. Not only that, but he's a black Latino kid named Miles Morales! There have been a few minority superheroes, but the industry is still dominated by straight white men. Black superheroes like Nick Fury and the Black Panther are only peripheral characters. But Spider-Man is Marvel's trademark guy; it's a big statement that they would make their most popular character a black kid. I liked this a lot, and the series reboot would be a good place to start since I wouldn't have to worry about catching up on Miles Morales' backstory. So I decided I should start by reading Spider-Man.

But of course, I quickly discovered there's more than one Spider-Man comic. Since major superheroes are owned by corporations rather than the individual authors who created them, the most marketable characters often have more than one series by more than one author going on at any given time. Batman has dozens of concurrent series being published at this very moment. Spider-Man, by comparison, only has a handful. But of course Marvel wouldn't be ballsy enough to make the primary Spider-Man comic feature a black kid. Miles Morales is featured in the spinoff series Ultimate Spider-Man. And Miles doesn't even have the spider-suit to himself! Inevitably, there was the crossover miniseries Spider-Men last year, where Marvel came up with a dumb excuse for parallel realities to collide so Miles could meet the "real" white guy Spider-Man, Peter Parker. I'm sure fanboys were pleased.

Anyway, Ultimate Spider-Man was even better than I thought it would be. What I enjoyed most about it was that the story is just as much about Miles' struggles growing up in a poor Brooklyn neighborhood as it is about being a reluctant superhero. The best superhero stories aren't really about fighting crime in funny suits--the popular characters have been around for decades, and there's only a certain number of ways you can punch bad guys in the face. The best stories are really about the human side of the hero, and Ultimate Spider-Man excels at this. Miles' interactions with the people he cares about are what drive the story, whether it's scheming with his Lego-loving best friend Ganke or the complicated relationship with his uncle Aaron.

And then we get to issue 13. Ultimate Spider-Man is forced to cross over with Marvel’s Ultimate-wide “Divided We Fall, United We Stand” story arc.

Have I mentioned how much I hate crossovers? It's a giant marketing tie-in to get you to buy the other comics if you want to understand the big picture. But more importantly, having a ton of superheroes in one place diminishes the power of the superhero as a concept. Spider-Man (or Batman, or Superman, or anyone else) is compelling because he’s unique in his setting. A mild-mannered nobody who dons a costume at night and combats evildoers. We can all identify with this story of the everyman transcending his station in life. But when everyone has superpowers, each character becomes that much less important.


Remember the inspiring story of “shy 13-year-old kid takes up the iconic Spider-Man mantle while still struggling with the real-life issues of being a teenage black Latino in New York City?” With this crossover, now it becomes “Spider-Man teams up with the Avengers to fight an army of terrorists ACROSS THE ENTIRE COUNTRY.”

Yes, I know in the Ultimate Marvel universe they’re known as “the Ultimates,” not the Avengers, but they’re just a more Serious Business version of the Avengers. So I’m going to call them the Avengers. I refuse to give in to Marvel’s marketing ploy and buy all the other Ultimate series when I really just care about Spidey, so here’s my understanding of it from Ultimate Spider-Man:

S.H.I.E.L.D., America’s leading superhero defense force, must defend America against Hydra, a group of “domestic terrorists” who stole S.H.I.E.L.D.'s massive arsenal of weapons and are using them against S.H.I.E.L.D. to liberate America. Hydra sounds like it has good intentions but it does evil things like kill people. As a result, S.H.I.E.L.D. has put the country under martial law and its leader Captain America has become President of the United States, although it’s never made very clear how he gained this title. Washington, D.C. has been entirely destroyed, and S.H.I.E.L.D. must now go fight Hydra in Wyoming. And Spider-Man is there to help.

Did I mention the nation’s capital, one of the biggest cities in the country, has been completely obliterated? And none of the characters in Ultimate Spider-Man felt the need to even offhandedly mention any of this until issue 13, when it abruptly becomes the main storyline.

I’m not sure if “Divided We Fall, United We Stand” is meant to be satirical or if it really is just a jingoistic tale of “AMERICA #1 AT WAR-FIGHTIN’!” S.H.I.E.L.D. could be a metaphor for the United States’ huge real-life military. Its bloated defense spending is so unnecessary that it becomes its own worst enemy; ironically, Hydra wouldn’t even be an issue if S.H.I.E.L.D. didn’t have a plethora of weapons lying around for Hydra to steal. Or did they really steal the weapons? Reminds me of a certain war in Afghanistan with certain weapons given to people by a certain country who would later go to war against them. And defense contractors raked in the profits.

S.H.I.E.L.D.’s sudden military control of New York City in issue 13 is presented as pretty harsh, as Miles’ parents aren’t even allowed to go home or search for their missing son. Miles’ father gets arrested trying to enter his house, and he’s detained indefinitely by S.H.I.E.L.D. He’s rescued by Hydra operatives, which sounds great! But they shoot Miles’ dad’s captors, which is evil. So they’re evil. Because the United States military never kills civilians overseas, right?

In Ultimate Spider-Man, killing Miles’ father’s jailors is the only clearly evil thing we see Hydra do. They also fight against Good Ol’ Captain America, but they’re only fighting for what they believe in, so I can’t hold that against them. We’re really just taking Captain America’s word for it that Hydra are the bad guys and S.H.I.E.L.D. are the good guys. And of course, Captain America has dubiously risen to the status of President of the Fucking United States. Can you get any more patriotic than that? I’ve never read any Captain America comics; I had no idea he was such an asshole until now.

If you love the Avengers or the Ultimates or X-Men or Justice League or any other giant superhero crossover series, by all means enjoy it. But I wasn’t trying to read Avengers. I was trying to read Spider-Man. Can’t Marvel just leave him alone and let him do his own thing in New York City?

Side note: As much as I hate the S.H.I.E.L.D/Hydra storyline, there is a brief scene where Spider-Man is wandering around farmland in Wyoming. It’s awesome.

I can’t remember where, but I remember reading a few years ago about how Spider-Man is defined by his urban surroundings. I'm a sucker for stories where the setting is as important as the characters, and New York City is popular for movies and books and TV shows because it's such a diverse location to explore. Put Spider-Man in the middle of a field in Wyoming and he can’t hide in the shadows or websling from rooftop to rooftop. In Wyoming, Spider-Man becomes just a guy in a goofy spandex suit.
by Unknown at 1:08 PM