I've been on a Suda51 kick recently, and I love me some Eastern European game design. Grasshopper Manufacture's most recent collaboration is with Budapest-based studio Digital Reality for the shoot-em-up downloadable title Sine Mora. It may be the best modern shoot-em-up since Treasure's Ikaruga. Like Ikaruga, its twitch-gameplay difficulty harkens back to the genre's arcade roots. But while most games like this are vertical these days, Sine Mora is a horizontal game based around a time-slowing mechanic which helps the player get through the bullet-hell levels and epic bosses. Grasshopper did the artwork, but Digital Reality did all the actual game design. 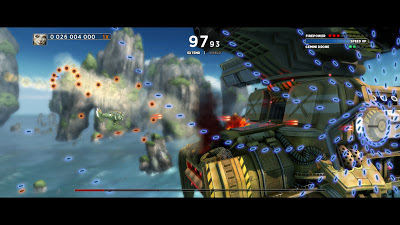 And most importantly, while most foreign games in my global gaming series are still in English (for better and for worse), Sine Mora's characters actually speak in Hungarian. I love it. I don't know if it's Grasshopper who made the call to let Digital Reality keep the game in their native tongue, but publisher Microsoft deserves major props for letting it happen. This may be the first time a game has ever been released worldwide in Hungarian, a language spoken by only 15 million people.

View Global Gaming Spotlight in a larger map
by Unknown at 4:06 PM