Lego has historically struggled with creating brick-built animals. While Lego bricks are great for building things with lots of right angles and flat surfaces like vehicles and buildings, it's a bit tougher to use Lego bricks to recreate organic lifeforms. Lego realizes this, as we can see in their recent Dino theme where the eponymous dinosaurs were not brick-built but unfortunately more action-figure-like.

Shelob in this set is perhaps Lego's Best Spider Ever. It's their third attempt at a Giant Spider; before Shelob, Lego made two different sets based on Harry Potter's Shelob ripoff Aragog. There was the hilariously cartoonish Aragog in 4727 Aragog in the Dark Forest in 2002, and the slightly less terrible but still terrifically terrible Aragog in 4738 Hagrid's Hut in 2010. Look at those sword-legs! Indeed, there are two key problems with all of Lego's previous spiders: getting the eight multi-jointed legs right, and getting the abdomen right. 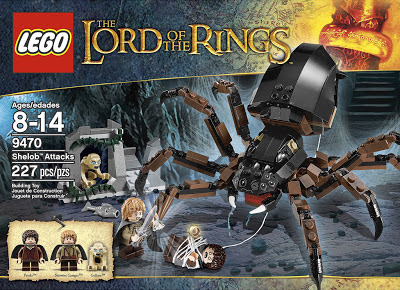 Shelob Attacks rights all the wrongs of previous Lego spiders. Although they're still a bit fragile, Shelob has well-designed legs that are actually strong enough to support the spider's body on their own. And Shelob has a huge abdomen which adds some meatiness (yum!) to her body. She's even got a spinneret so she can trap Frodo for a juicy treat, and imposing pincers to munch on him with.

Look closely at Shelob's eyes. One of them is poked out! This is a nice lil reference to the source material, where Sam stabs her in the eyeball. Speaking of the non-Shelob parts of the set, let's take a gander: There's Frodo with his blade Sting, the Phial of Galadriel, and of course the One Ring that fits snugly on his hand. The best part of this minifigure, though, is his petrified "I've just been poisoned" facial expression--click on the image above for a zoomed-in view. We've got his loyal Samwise, who looks pretty much how you'd expect him to look.

Then there's Gollum. Instead of a standard minifig body, Gollum has a hunched-over mold with a random stud on his back (to later attach some elven rope?). I'm not really a fan of this body or his strange facial expression, but he wouldn't have worked with a standard minifig body. I'm not sure what the correct portrayal of Gollum would've been.

Nevertheless, this is a nifty set. A realistic, if slightly fragile, depiction of Shelob. Great Frodo and Sam minifigs. And the first appearance of Gollum!
by Unknown at 10:48 AM