We don't get the chance to talk about Latin American videogames very often, even as Chile has one of the region's strongest economies and standards of living. But we'll hopefully see more and more Latin American games over the next couple decades. Extra Credits even thinks so, in their totally unique and original "Global Games" video series they just started...

Rock of Ages is a hilarious, bizzare tower defense/Marble Madness hybrid with a Monty Python-esque art style. You control a giant rock with a creepy (in a good way) face. In some ways, it reminds me of the other giant-ball misunderstood classic, Odama. It was released on Xbox Live Arcade in 2011, developed by three brothers in Santiago. 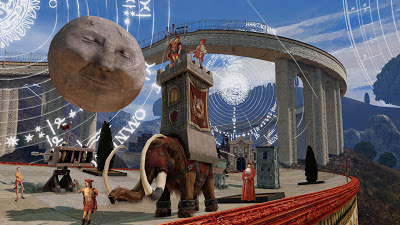 The game was published by Japanese distributor Atlus. as I get older and my taste in games gets more obscure, I gain more respect for Atlus--they do a great job of bringing a higher profile to smaller, lower-budget games. While the games industry splits into two distinct camps--AAA and indie--the "AA" games and publishers like this are beginning to disappear. Hopefully Atlus can continue to thrive into the next decade.

View Global Gaming Spotlight in a larger map
by Unknown at 2:35 PM