Cultural discovery and soccer in Tijuana

Driving to Mexico for the day made me feel self-conscious as an American. Heading from San Diego down Interstate 5 towards the border with my dad, we were met by a caution sign, warning “GUNS ILLEGAL IN MEXICO.”

Does that say more about us or them? A country infamous for gun violence with stricter firearm regulation than we do, warning gun-loving gringos not to bring ours down to México. I wonder if there’s anywhere on the Mexican side of the border warning “GUNS LEGAL IN UNITED STATES.”

Once you get to the border crossing, the Mexican customs facility is super fancy and modern. It even had that new car smell! There was a nice big “MÉXICO” sign with a giant Mexican flag. Crossing took less than five minutes.
Spoiler alert: crossing back into the U.S. that night would not be nearly as fun. 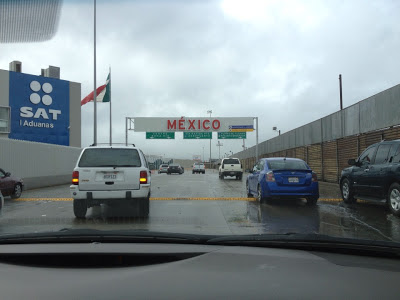 Once you’re in Mexico, it’s immediately clear you’re in a third-world country. I knew it would be poorer than the American side, but I figured it would be less stark of a contrast right away. There are nice neighborhoods of Tijuana, but the ones right at the border are largely slums.

Navigating Tijuana in the car felt exactly like it did during my years living in the rest of Latin America. A fun mishmash of well-marked streets with clusterfuck intersections, and upper-class shopping malls mixed with working-class homes.

Our main objective for the day was going to the soccer game. The epically-named Club Tijuana Xoloitzcuintles de Caliente—Xolos for short—were playing a home game against Pachuca at their righteously-named stadium, Estadio Caliente.

Los Xolos are the Cinderella story in Mexican soccer right now. While most big Mexican clubs like Guadalajara and Club América have been around since the early 1900s, Club Tijuana was only founded in 2007.  Northern Mexico isn’t known for great soccer teams; the club racks up plenty of frequent flyer miles to play its away games, while the big teams in central Mexico can simply hop on the bus for theirs. In less than six years, the new club has been promoted to the top division of Mexican soccer and won the championship for the first time last season.

Before going to the match, I assumed the Xolos used “Caliente” in their team name and stadium name simply because it sounds cool. I didn’t realize it’s owned by Grupo Caliente, Mexico’s largest sport betting company, and they’re even the club’s shirt sponsor. Okay, I guess that’s fine. Plenty of big European teams are sponsored by betting companies. And the ‘C’ in the Caliente logo is probably shaped like a dog because that’s the Xolos mascot, right?

The team says it’s named after the ancient Aztec dog—the xoloitzcuintle—because it represents strength and all that. But I didn’t discover until we got to Estadio Caliente that the stadium is located directly adjacent to the Canódromo, a fancy dog-racing arena owned by the same company. When we walked by the racetrack to get to the stadium, it was packed with people writing on little sheets of paper, keeping track of their betting odds on the various dogs. It’s no coincidence the soccer team named after an iconic canine is owned by a company that runs a dog-racing track right next door. The “sacred Aztec dog” thing is all an excuse to make Club Tijuana’s entire identity revolve around Grupo Caliente gambling.


Grupo Caliente is owned by former Tijuana mayor Jorge Hank Rhon, a controversial figure in Mexican politics. He’s long been connected by the media to drug lords and has been arrested on numerous occasions. He’s also the father of 19(!) children with various women. 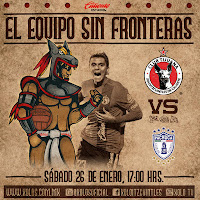 But hey, Estadio Caliente is a nice spanking-new soccer stadium, opened in 2007 to coincide with the team’s inaugural season. They’re not even finished constructing its upper bowl. As a D.C. United fan, I’m jealous—dilapidated 53-year-old multi-sport RFK Stadium is shameful by comparison. And despite its shady roots, Club Tijuana has given hope to a struggling city. They call themselves el equipo sin fronteras, “the team without borders”… a not-so-subtle nod to its identity as a border town. The Xolos are also hugely popular among Southern California’s Latino population, and serve as a connection to their home country.

The game itself was fantastic. Los Xolos were dominant throughout the game, and beat Pachuca handily by a score of 2-0. Despite constant warnings from Americans to “be careful in Tijuana,” I didn’t feel any more threatened at Estadio Caliente than I do at an American sporting event. In fact, the fans at the game represented a great cross-section of the Mexican population. Rich, poor; light-skinned, dark-skinned; fans living in California, and fans living in Baja California. Soccer is the great equalizer.

Tijuana is a city experiencing massive progress. Crime is down and standard of living is up. It’s a shame its reputation causes many Americans, even ones living within a few miles of the border, to avoid Tijuana like the plague. Then there’s our immigration policy. Mexico’s border crossing was incredibly modern and welcoming, but the border station to get back into the United States seemed more like the Soviet Union. Giant concrete buildings and cameras everywhere, not to mention the great symbol of freedom and liberty that is the border wall. Once again, I was embarrassed as an American.

You could say this is all to stop undocumented Mexican immigrants from crossing the border, but when I drove to Canada a few years ago, I had the exact same Big Brother experience getting back into the U.S. I hope one day we as Americans can move past our post-9/11 perpetual fear and massive xenophobia to live in a more friendly global community.
by Unknown at 5:17 PM