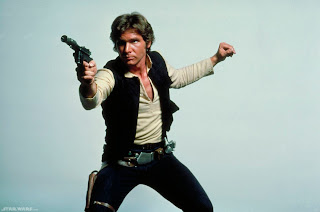 I’ve been waiting for a Han Solo game my entire life. It makes sense: a fan-favorite character, a swashbuckling bounty hunter with plenty of adventures and hijinks all around the galaxy. It could essentially be Grand Theft Auto in space, and players could pimp out the Millennium Falcon to their liking!
Seems like a perfect fit. So why hasn’t there been a single video game with Han Solo as the primary character, other than 2003′s Star Wars: Flight of the Falcon on Game Boy Advance?
How did we get to this point? I blame it all on two titles: Star Wars Galaxies and Knights of the Old Republic. When both games came out in summer 2003, it changed everything. KotOR was one of the first hugely successful, big-budget Star Wars video games not based at all on the era of the original film trilogy. It took place long before that, when Jedi abounded. Along with this came Galaxies, an MMO taking place in the era of Episodes IV, V, and VI. It was a gargantuan commercial flop.

The success of KotOR and the failure of Galaxies has pushed LucasArts away from games based on the original movie trilogy. There have been a few exceptions, but by and large, it seems video games have unfortunately become the exclusive realm of Star Wars‘ Expanded Universe. Maybe this is great news for fans of the hundreds of Star Wars tie-in novels that have been written, but for the rest of us fans, it’s a shame. It may be a long time before Han Solo finally gets his own game.
The upcoming Star Wars 1313 shows some promise, though. While it’s not connected to any of the films, the developers maintain that players will NOT be able to use a lightsaber. In our lightsaber-obsessed Star Wars gaming community, that’s great news to me. The seedy Coruscant underworld setting looks much darker than previous SW games, and the developers claim it deals with “mature themes.” We’ll see what that means, though; it’s always a gamble when franchises seek to hard-boil themselves. In an effort to appear more grown-up, many franchises lose their heart and soul–just look at Prince of Persia: The Warrior Within or Max Payne 3. Hopefully Star Wars 1313 bucks the trend.
by Unknown at 9:46 PM No comments:

Mario creators Shigeru Miyamoto and Takashi Tezuka sat down with Game Informer this week to answer a few questions about the long-running Nintendo franchise. A couple of Miyamoto's answers caught my eye.

GAME INFORMER: Time and again, Bowser kidnaps Peach. Why do Mario and Peach still race go-karts and play tennis with him?
SHIGERU MIYAMOTO: If you're familiar with things like Popeye and some of the old comic characters, you would oftentimes see this cast of characters that takes on different roles depending on the comic or cartoon. They might be businessman in one [cartoon] or a pirate in another. Depending on the story that was being told, they would change roles. So, to a certain degree, I look at our characters in a similar way and feel that they can take on different roles in different games. It's more like they're one big family, or maybe a troupe of actors.

Clever of Miyamoto to specifically reference Popeye here. His seminal 1981 arcade game that ushered in a new era for the industry, Donkey Kong, began life as a Popeye game. When Nintendo couldn't acquire the license to use the characters, Popeye became Jumpman (later renamed Mario) and Bluto became Donkey Kong.

When you think about Miyamoto's "troupe of actors" comment, it's really been there in the franchise all along. And not just in the figurative sense that gives arch-rivals excuse to play golf and throw parties together. The Mario series is literally a theatrical production.

The first hint is death. Starting with Mario Bros. in 1983, Mario didn't actually die--instead, he simply fell off the stage. In an animation that has since become iconic, the Mario sprite actually came unglued from the environment of the game and fell outside the gameworld. Is this breaking the fourth wall? Perhaps it was a way to explain why one man could have multiple "lives": he wasn't actually dying. Like a long-running theatrical production, he was just doing another run-through of the same scene.

There have been blatant hints sprinkled throughout the series, getting less and less subtle with each subsequent title. 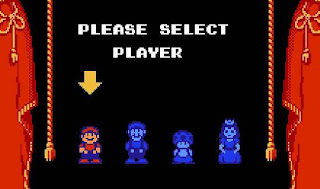 With Super Mario Bros. 3, the entire title screen was a play:


In Paper Mario, the RPG interpretation of the Mario universe revolved around "battles" staged at a theater, complete with applauding audience members (fully realized here in the sequel, The Thousand-Year Door):

Not only are Mario, Luigi, and Bowser familiar to video game audiences, but most of the bit-role characters are as well. From Koopa Troopas to Shy Guys to Bullet Bills, the Mario franchise has built up a huge stable of otherwise inconsequential minions that fans know and love. No other series in gaming has accomplished this feat. Because of Miyamoto's "troupe of actors" approach in which characters recur in different roles, even casual gamers know what a Goomba is.

But are all Mario's roles created equal? There was another answer in the interview that perked my ears up:

GI: Mario has been a boxing referee, a doctor, an Olympian, and a carpenter. Are all these official careers in Mario lore? If he has a medical degree, why does he continue his plumbing business?
MIYAMOTO: There's really only one rule in terms of the things that Mario does. Generally, it's that he's more on the blue-collar side. He's hard-working, and certainly much more physical in nature. So, I think that a doctor is sort of an unexpected and perhaps unbelievable role for Mario. Perhaps the Dr. Mario you're thinking of was maybe, in some way, not necessarily legitimate.

I love this idea that Dr. Mario was a strange role even for the character's creator. This reminds me of films where you see actors cast against type in a role they don't quite fit--like Robin Williams in horror movies. The fact that Williams comes from a comedy background makes the horror that much more creepy. With Mario, the fact that he's normally a working-class guy means a role as a doctor doesn't quite ring true. Miyamoto himself gets the impression Dr. Mario isn't quite "legitimate." After all, all he seems to do is pop pills!

With the Mario franchise having an extensive canon of mostly self-contained stories, Miyamoto tells us there's no overarching plotline at all. In fact, perhaps the events of these games aren't happening at all--they're simply all part of stories told by a jolly troupe of performers. It's as if... Mario is a fictional character.

Is this breaking the fourth wall? Is Mario acknowledging he's in a game? This medium hasn't quite learned how to convey gripping plots, but designers like Miyamoto have forged the way for memorable characters. With the same ones in each game, the ensemble cast becomes familiar to us. It's like actors you see onstage or in film. You know Meryl Streep isn't really Julia Child or Margaret Thatcher, but you like the cut of her jib so you'll go see anything she's in anyway.