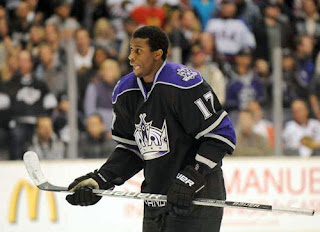 All hockey fans have heard it. When you talk to a non-fan, you inevitably receive some variation of the phrase, "Hockey is a white people sport." According to the U.S. Census Bureau, 25% of Americans are minorities. Why aren't they fully represented in our favorite game?

It's a touchy subject. We could provide these non-hockey fans with rebuttals like "Jarome Iginla has been captain of the Calgary Flames for seven years, and he's black!" But they don't care. Deep down, even hockey fans know although there are currently 26 black players in the NHL, it's still an overwhelmingly white sport compared to football, baseball, basketball, or soccer.

The idea of being "white" is a complete social construct, but analyzing the definition of the word would be its own blog post altogether. For the sake of clarity, I'm calling individuals "white" if most people on the street would identify them as white. Barack Obama is just as much Caucasian as he is African American, but because of his skin color, most people would identify the President as black. 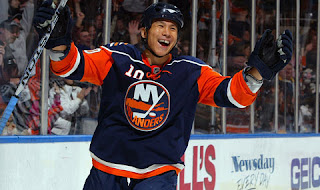 Many non-hockey fans don't take into account that most professional players are, in fact, not American. Of the 962 people who played in the NHL last season, a mere 207 (22%) were born in the United States. I know what you're thinking. "But soccer hardly has Americans either, and it's diverse as can be! Even baseball features tons of foreigners!" But what countries do these foreign hockey players come from, exactly?

Over half of NHLers hail from the Great White North. There are 520 Canadian-born players active in the NHL, comprising 54% of the league. The remaining 24% come mainly from Sweden, the Czech Republic, Finland, and Russia, with a smattering of other Europeans to round it out.

All these countries are far more "white" than the United States. Even among American hockey players, the vast majority come from New England, Michigan, and Minnesota, which have whiter demographics than the U.S. population as a whole. But this isn't a product of any sort of racism. These parts of the world have colder climates more conducive to the development of hockey, and they happen to be areas where folks of African, southeast Asian, and Latino descent don't live in great numbers. 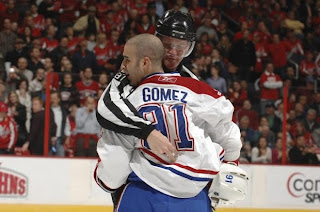 It's not all "unfortunate coincidence." As evidenced by the Washington Capitals selling out all 41 home games in '09-'10, hockey fandom is alive and well in warmer parts of the US. When kids can't ice skate in the backyard, though, hockey requires a bit more money. In temperate climates, kids have to afford skating lessons, time at the ice rink, and much more equipment than one needs to play basketball. In warm parts of the world, families must be more affluent to support their child's hockey. Since we live in a society where the rich people tend to be white, this means more people who can afford to play hockey in the D.C. area are Caucasian, even though D.C. has a huge non-white community. Part of the reason far more NHLers are Canadian is that Canadian kids don't need as much money to just go outside and play hockey.

But as D.C. hockey fans, we're in a unique situation. I didn't grow up playing hockey. I'm not rich or Canadian. The only reason I started going to Caps games was because tickets were dirt cheap (this was before the team's popularity skyrocketed and took ticket prices with it--they even had Student Nights where you could get $15 seats and a free burrito up until a few years ago!) and I figured, "why not?" Theoretically, I had just as much of a chance of getting into hockey as a black kid from the area. So why did I get into the team, and the black kid didn't?

We had a discussion about it over at my favorite Caps blog, Japers' Rink. Associate editor Becca H writes: 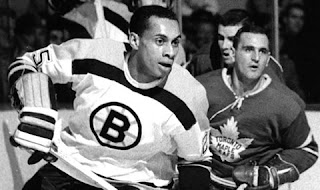 "It's a self-fulfilling prophecy. Kids need role models and there haven’t traditionally been many minority role models in the NHL. As adults, we know anyone is capable of playing this game and it doesn't matter what you look like. But for a kid, there's not as much to identify with. If you were a kid looking on the ice and seeing guys whose skin was a different color than yours, who would your role models be? Would you think this is a game that's inclusive and a reachable goal for you? There have always been fewer minority players in the game and that adds to the lack of popularity among minority kids. It's why, as much as we mock the commercials, those 'Hockey Is for Everyone' programs are so important--kids need to see people who look like them making it."

She makes a great point. If I'm an 8-year-old black kid watching a hockey game, not knowing anything about any of the players off the ice, I'm going to identify more with the one black guy on the team than the 20 white guys. 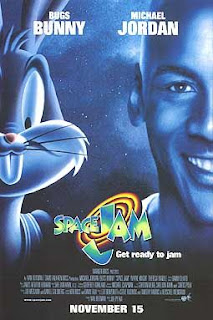 But then I thought of Space Jam. Many of my friends who are fellow hockey fans from non-traditional places got into it through The Mighty Ducks, but I had my own children's sports movie inspiration. I watched this Michael Jordan-Looney Tunes crossover masterpiece over and over in my youth, yearning to be an NBA star like him even though I had never encountered basketball before--at least until I realized I was slightly lacking in the skill department. But clearly I still looked up to MJ even though his skin was a different color from mine. This gives me hope that even in a sport dominated by white guys, a few more Asian and Arab kids can be inspired to lace up the skates.

I will admit hockey is still mostly a "white" sport, but the demographics of the game are changing. A record 11 Americans were selected in the first round of the 2010 NHL Entry Draft. Emerson Etem (drafted #29 by Anaheim) is not only black, he's from the non-traditional state of California! And in a triumph of the D.C. area, Jarred Tinordi (drafted #22 by Montreal) became the highest-drafted player from our neck of the woods of all time. I envision in a few decades, we'll see a National Hockey League full of players from all over the continent, of all different ethnicities and backgrounds. Hockey may never reach soccer's level of diversity, but I don't think our grandchildren will get teased for loving a "white people sport."