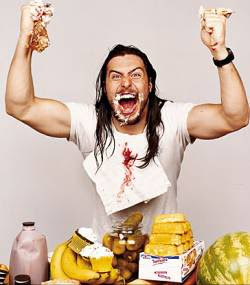 Andrew W.K. is the renaissance man of partying. He's released a slew of party-themed hard-rocking albums as well as one of covers of songs from Japanese TV shows, and travels the world as a motivational speaker telling people to love themselves and enjoy life. He's got a Twitter account full of PARTY TIPS such as "PARTY TIP: Life isn't about waiting for the rain to pass. It's about partying hard in the rain and getting wet!" and "PARTY TIP: Take a giant sea turtle, and gently remove its shell. Then fill the shell with chips and dip!" He even shows up on Fox News to make funny faces and plays Insane Clown Posse concerts to get their fans' knickers in a twist. AWK is basically a professional troll.

He's also famous for the controversy surrounding his identity. All his albums have a guy named "Steev Mike" in the liner notes, and conspiracy theorists think Steev Mike is actually the Puppetmaster--that Andrew W.K. isn't a person but a corporate product played by many different people. It doesn't help that AWK puts occultish imagery in the background of his otherwise fun-loving music videos.

But that's not what I'm here to talk about. To me, the most intriguing Andrew W.K. release is 55 Cadillac. It was a short album released last year, not of party anthems but of... new-age spontaneous improvisational piano pieces themed around driving a '55 Cadillac at night.

It's hard to believe the guy who created this:

Also wrote this (there's ambient sound for the first 30 seconds or so--feel free to skip ahead): 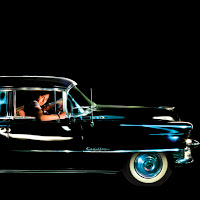 There are no vocals through the whole album, so far all we know, Steev Mike really wrote this. But to me, 55 Cadillac is the greatest proof that Andrew W.K. is a real person (well, and the fact that AWK hosts a kids' game show on Cartoon Network called Destroy Build Destroy where they do exactly what the title implies). A shady corporation would not release this album: a collection of lengthy piano tangents with no radio singles to speak of. It's a truly artistic complement to the rest of his music which, I admit, is more about the fun of Partying Hard than it is about the quality of the songwriting itself. Andrew W.K. is a true partier. As he tweets:

"14 years ago I told my guidance counselor that PARTYING would be my career. He scoffed and said, 'Yeah right'! #WhosLaughingNow?"

Well, and "PARTY MEAL: Malted milk balls w/ diced Reese's cups in cream, and a buttermilk biscuit w/ chili-butter on the side." Indeed, AWK. Indeed.
by Unknown at 1:30 PM