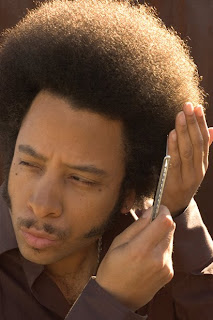 Boots Riley is one of my all-time favorite people. His Oakland-based political rap group, the Coup (click the link, it's a fantastic song), has been around since 1991 and writes far sharper activist commentaries than any current political punk groups who've been around since then like Bad Religion or Anti-Flag. They're perhaps most famous to a wider audience for the controversy surrounding their 2001 album, Party Music. Slated to be released in early September '01, the album cover happened to feature... the World Trade Center being blown up. The band was forced to delay the album until November and change the cover to a much less offensive image. Riley was never quite satisfied with the change:

"There's been a whitewash in the media over the past couple days over what the US' role in the world is, and the fact that they kill hundreds of thousands of people per year to protect profit. Now how can I get to the point where I could be saying that on the world stage, and interrupt the lies that CBS, CNN, NBC, and everyone is saying? In my view, that [would be] by keeping the cover. Not because I think by looking at the cover you get all of this message that I'm telling you, but as a way to have a platform to interrupt the stream of lies that are being told right now."
I don't always agree with some of the extremes he goes to in his views, but I hugely respect Boots for what he does. In 2006 Riley teamed up with fellow leftist political musician Tom Morello of Rage Against the Machine fame to form Street Sweeper Social Club, a political rap-rock supergroup. They released their self-titled debut album last year, and this past week, released The Ghetto Blaster EP.


Street Sweeper Social Club has got some great songs, but I can't help but think they pale in comparison to the Coup. Tom Morello is famous for his quirky effect-laden guitar playing, but it runs a little dry here. Coincidentally, Rage Against the Machine started in 1991, the same year as the Coup. But since then, while Boots Riley has come up with tons of different things to talk about (I continually enjoy each of the Coup's albums more than the last), Morello seems to be short on ideas. His post-Rage Against the Machine band, Audioslave, kind of sucked, and his guitar work with Street Sweeper Social Club just sounds recycled. 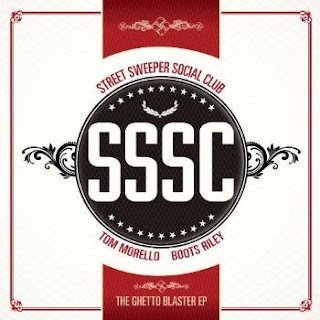 The Ghetto Blaster EP is a bit of a disappointment as well. That's not to say it's bad; the lyrics are solid and the music is okay, but it just doesn't innovate as much as it could. The EP is seven tracks: three original songs, three covers, and a remix. The three originals, "Ghetto Blaster," "The New Fuck You," and "Scars (Hold That Pose)" are fine enough, sound like many of the songs on their full-length album. The remix is a "Guitar Fury" version of one of the best songs on the full-length, "Promenade". The covers are the most interesting. One is a cover of LL Cool J's "Mama Said Knock You Out," which is pretty standard. One is actually a cover of a song by the Coup, "Everythang." The last is the highest-profile track on the EP, a cover of English political artist MIA's excellent breakout hit "Paper Planes". I love hearing people's re-interpretations of other artists' songs in covers, but SSSC's version is a fairly predictable guitar-driven version. I can't help but feel like this was a missed opportunity to do something much more awesome.
Street Sweeper Social Club is decent, but Tom Morello is dead weight on Boots Riley's musical expression. I can't wait for the Coup to start recording again.
by Unknown at 12:17 PM