The 2011 Winter Classic logos have been revealed! It's time to start speculating about the sweaters both the Pittsburgh Penguins and Washington Capitals will wear come January 1. Since the first Winter Classic on New Years Day 2008, teams have worn throwback jerseys reminiscent of a bygone era in their club history. This will be the first year a team plays in their second Classic: the Penguins also played in the inaugural '08 game in Buffalo against the Sabres, sporting the powder blue uniforms they wore from 1968 to 1971. These proved so popular they became team's third jersey from '08-'09 onward. What will both teams wear this year (or I guess, next year)? The recently revealed logos give us some clues. By the way, thanks to NHLuniforms.com for these great images of historical get-ups.

The Pens logo displayed here was never actually used on a uniform. It was the team's official logo for only one season: '67-'68, their first in the NHL. Instead of a logo, their jersey featured a diagonal "PITTSBURGH" lettermark, much like the New York Rangers' sweaters, who also have a logo that doesn't appear on the uniform. These sweaters were ditched the following season in favor of the aforementioned unis they wore from '68 to '71, so this basically guarantees us Pittsburgh's sweaters for the '11 Winter Classic will be modern renditions of one of these two from their inaugural season: 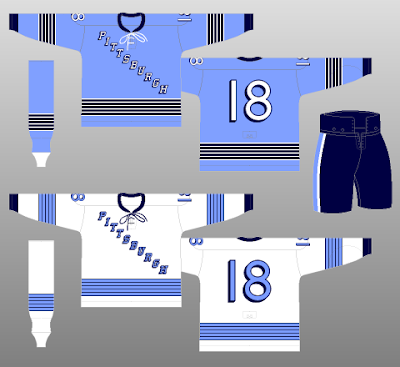 These don't look nearly as great as the throwbacks they used in '08, but they're still a classic hockey design. The Pens established powder blue as a part of their color spectrum with the '08 WC jerseys-turned-thirds, so I'm leaning heavily towards Pittsburgh choosing powder blue again for '11 over the white one. I'd rather see them go with white, though, because it would mix things up a bit. They'll probably add nameplates to the back of the sweaters to comply with current NHL regulations. As a side note, the number font on these jerseys is fantastic, and I hope it's retained for the WC.
The Capitals' Winter Classic logo is taken from jerseys they wore for over two decades, from their inception in 1974 to 1995. There were a few modifications during this era (changing the positioning of the stars, adding or removing trim on the numbers, etc.), but they remained basically the same. The big question is: white or red? 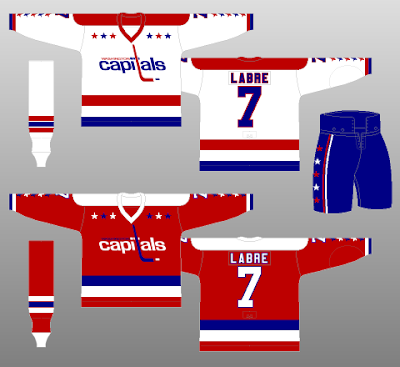 They're equally sharp jerseys. Assuming Pittsburgh will wear powder blue, the Caps will most likely go with white, because to comply with NHL rules, one team must always don white. But I hope the Caps wear red. First of all, a team is required to wear white so the opposing club's uniforms don't clash. Here, however, bright red clashes much less with powder blue than white does, as seen in 2008. Plus, we must realize these specialty jerseys are created with marketing and profit in mind. They want fans to lay down cash for it. The red sweater would be much more cohesive for fans to wear at Verizon Center, where "Rock the Red" is the mantra. White speckled in there would just dilute the image of the Caps faithful.
The other factor to take into account with both teams is the potential for turning these one-off sweaters into future third jerseys. Four of the six teams that have played in past Winter Classics adapted their WC sweaters into third jerseys afterward (or in the case of the Philadelphia Flyers, road jerseys). That number may even rise to five, as the Sabres are likely to turn some variation of their WC unis into road sweaters for '10-'11. The Pens would be replacing their old WC-thirds with new WC-thirds, depending on the reception the new throwbacks get. It would be more interesting with the Caps, because they have yet to introduce a third jersey since they started wearing their current uniforms in 2007 (which are, in fact, modern interpretations of the '74-'95 sweaters). Owner Ted Leonsis has stated he doesn't plan on introducing a third in the foreseeable future because the Caps' current look is great, and as I mentioned above, he doesn't want to dilute the Rocking of the Red. After the Winter Classic, I guess we'll find out.
by Unknown at 2:21 PM