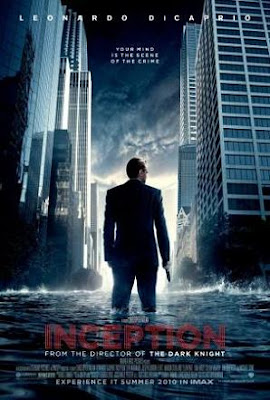 I was skeptical going into the theater last night to see Christopher Nolan's latest work, Inception. It's nearly impossible to shake the Batman connotations. He's the same guy who directed 2005's highly-acclaimed Batman Begins and 2008's orgasmically-acclaimed The Dark Knight. I'm skeptical because although I really liked The Dark Knight, I didn't think it was the greatest film of all time, like many seem to believe it is. To make matters worse, the primary Inception theatrical poster is nearly identical to one of The Dark Knight's theatrical posters.
I hoped this wasn't just cashing in on Batman's (or really, the Heath Ledger's) success. After all, the premise was intriguing: manipulating dreams. And the film features one of my biggest man-crushes, Cillian Murphy of 28 Days Later fame. And the week of the film's release, it was universally praised by critics. So I thought I'd finally cave in and see it.

It's a great film. The psychology of it all immerses you in the experience and makes you really think deeply about it. The characters talk about a lot of things pertaining to dreams that we've all contemplated but not put into words. The idea that when you sleep for five minutes, your dreams can feel like they last an hour. The idea of never remembering how dreams begin: we always start in the middle of everything, in medias res. And there are always things we know are wrong--your girlfriend's hair is red instead of brown, or everyone has three arms--but we don't really think about the fact that they're wrong until after we wake up. The film explores how while we only use a fraction of our brainpower when we're awake, we can use it all when we're asleep, because we're fully connected to our subconscious; we can dream as fast as we can think.
The crux of the story revolves around controlling one's dreams, actively using your subconscious to shape the dreams however you want. In addition, there's this concept of "shared dreams," where you can go into someone else's dream and interact with it. However, the more you disturb their dream, the more their "projections" of people within the dream will realize you don't belong there, and become hostile. People don't leave this dream world unless they wake up in real life, or die in the dream.
Unfortunately, Inception falls into both the trappings of being a Hollywood film, and earning a PG-13 rating. Hollywood means the film is full of stars: Leonardo DiCaprio and Ellen Page play the leads. While they don't ruin the movie, they're not exactly riveting actors either. And while the film's concept seems like it would provide endless possibilities for crazy dream scenarios, the accessible mainstream nature of the movie means instead of acid trips or social statements, the dreams the story takes place most in are...
Because we haven't seen those scenarios thousands of times before in cinema. An immaculate idea becomes a wasted opportunity, as the characters spend most of the time doing things they could've done in the real world without this sweet dream-controlling ability.

I'm also disappointed Inception went for a money-making PG-13 rating. "But Jake! The Lord of the Rings, your favorite movies of all time, are PG-13!" you may retort. But not all PG-13s are created equal. The Lord of the Rings was based on an epic fantasy tale written in the '30s and '40s, and published in the '50s. It was great filmmaking without needing more blood and swearing or more controversial, risky decisions--making such an epic film trilogy in the first place was risky enough. Inception, on the other hand, is a modern psychological thriller written for the 21st century. Yes, people actually bleeding when they get shot would have been nice, but I truly believe this film could've been so much more with an R rating. The dreams could've been made more disturbing and "out there," the subplot involving DiCaprio's character and his deceased wife could have been much deeper and more twisted, and Inception would've benefited as a whole. Instead, Nolan & Co. went for PG-13, because adults would still see it while at the same time capturing the lucrative "teenagers spending their parents' money" demographic.
In the end, though, I can overlook these faults because if you just take Inception for what it is and roll with it, it's an engrossing film experience. Its psychology is thought-provoking, and the concept makes you walk out of the theater thinking about it more. I'd be willing to bet if I watch this movie a second time, I'll get more out of it, and that's the sign of good cinema. Plus, Sir Michael Caine appears in a couple scenes, and he's one of my favorite people ever. It's not a Picture of the Year, but Inception is worth a viewing or two.
by Unknown at 1:45 PM