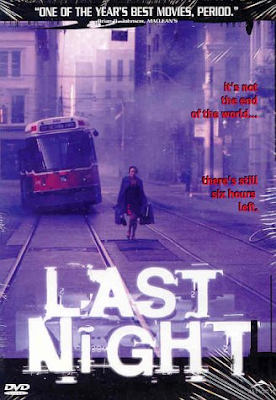 Last Night is a 1998 film about the apocalypse. But it's not a Dawn of the Dead, I Am Legend, Mad Max sort of explosive movie about the end of days--it's Canadian.
"What are you implying?" you may implore. "That Canadians are boring?"
Not at all. I'm implying there's depth and nuance in this film you can't find in most American armageddon cinema. It's about how people come to terms with the end of time.
The premise is "the world is ending in two months," and this movie chronicles the final six hours, as experienced by a handful of people throughout Toronto whose lives become intertwined over the course of the film. 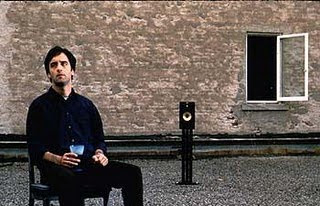 I discovered Last Night a few years ago while reading analysis of 28 Days Later, one of my favorite films of all time. If you liked that movie, this Canadian cacophony is right down your alley... albeit with 100% fewer zombies.
Since all the characters have known about their impending doom for some time, they're done panicking and screaming. They've had to decide where to spend their last night.
A family recreates their fondest memories with a faux-Christmas. The owner of a gas company calls every one of his customers and thanks them for their business. A man spends the night looking to fulfill every sexual fantasy he's ever had. Some people just decide to party to the end. Watching Last Night you can't help but ask yourself, "Where would I spend my last night on Earth?"

The film is full of humor set on an incredibly depressing backdrop. Main character Patrick is played by a stellar Don McKellar, who also wrote and directed the film. He wants nothing more than to spend his final hours alone with music and wine. Instead, he gets stuck spending the night helping a stranger look for her husband. The stranger is played by Sandra Oh, in one of her breakthrough roles before she became a star in the United States with Grey's Anatomy and Sideways.

How the world is going to end is never explained; all we know is that as it gets closer to midnight, it gets brighter and brighter outside, perhaps hinting at a "sun exploding" situation. But the reason for it all isn't important--the focus of Last Night is on the people at the end of the world, not the world at the end of the world. Spending valuable exposition time explaining the reason for the apocalypse would take away from the true meaning of the film--what it really means to be human.