Thanks to the fun lockout last season, this is the second time I'm doing this list in 2013! There have been a few uniform changes for this season, mostly for the better. My initial thoughts on most teams' uniform sets are in the old article linked above, and this article focuses mainly on changes for the 2013-14 season. Let's take a looksie. 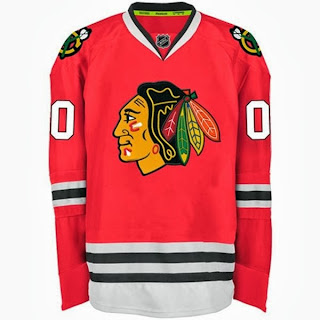 Uniforms unchanged from last season. Still as culturally insensitive as ever, but people still gush over them because it's an Original Six team. 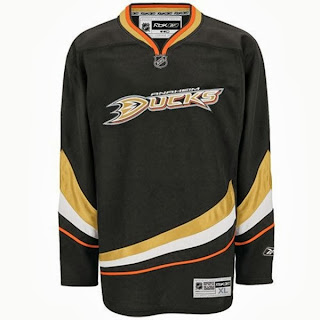 Uniforms unchanged from last season. Still too much black for a Southern California team and still too boring of a logo. Luckily the team has officially declared the "Webbed D" crest is the team's primary logo, and the wordmark appearing on their home sweater is only the secondary logo. Makes no difference for this season, but hopefully it's a hint that the vastly superior third jersey will replace the home uni next season. Apparently Anaheim will be wearing a throwback Mighty Ducks jersey for at least one game this year: the more eggplant we see, the better. 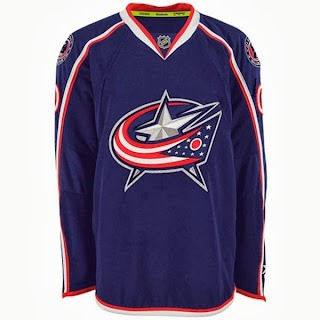 Uniforms unchanged from last season. There are only a few clubs still using the design relic of the '90s that is the "full sleeve shoulder yoke." It seems only a matter of time before the Blue Jackets' jackets get a facelift. 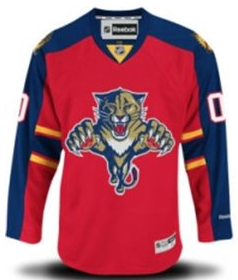 The blue third jersey (which I actually liked!) is retired. Still needs a better primary logo, and they still get deducted points for calling themselves "Florida" when they're not the only NHL club in Florida. 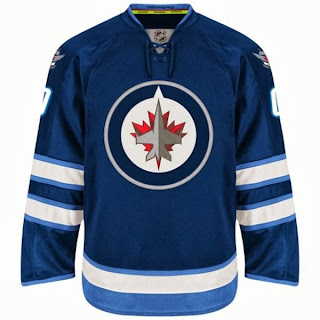 Uniforms unchanged from last season. Still as boring as ever. It's only a matter of time until a "throwback" third jersey based on the classic Winnipeg sweater is introduced, and it eventually becomes the primary jersey: just like what happened with the Oilers, Sabres and Islanders. 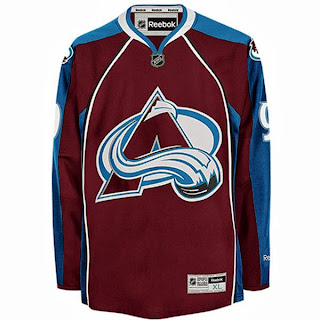 Uniforms unchanged from last season. See my comments on the Columbus Blue Jackets. Unfortunately, Colorado fans have a sentimental connection to the sleeve yoke and the Avalanche logo because of the Stanley Cups won with them. It's a super '90s look, and the Avs don't have a "classic" look to go back to (maybe the old Colorado Rockies?). They need a uniform-wide redesign, and maybe a less '90s team name as well. But keep that burgundy and blue color scheme. It's sweet. And the Bigfoot shoulder patch. And actually, the third jersey isn't too shabby either, but I don't think it could carry the full load of being a primary jersey. 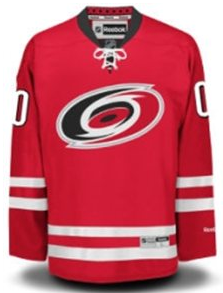 New home and away uniforms! They've simplified everything for a more iconic look, which is a big step up. Although some personality was lost in the process: I miss their distinctive hurricane warning flag waist stripe. I enjoy away jerseys that aren't simple palette swaps of the home jersey, and Carolina's new road sweater has a pleasant squared-off red shoulder yoke. People are comparing the new sweater set to Team Canada's, but I don't mind the similarity. They could've averted the comparison if they kept the hurricane flag stripe, though! The lace-up collar is nice, but at this point it seems there are more teams who use it than teams who don't, so its novelty has worn off. And it's not like the Hurricanes are a historic team with ties to the old lace-up days. 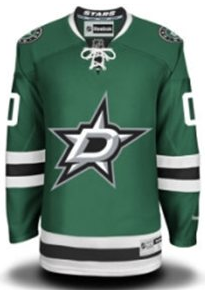 All-new uniforms! Green is a color the NHL is sorely lacking, so I'm ecstatic Dallas decided to get rid of its Black for Black's Sake and make a colorful upgrade. The new logo is an improvement over the old one, but it lacks personality. They've got a Texas alternate logo, but it only appears on the players' pants. For a team in a state so proud of itself, couldn't they have incorporated more Texan imagery? Like Carolina's new road threads, the Stars' new away jersey has a pleasant shoulder yoke. 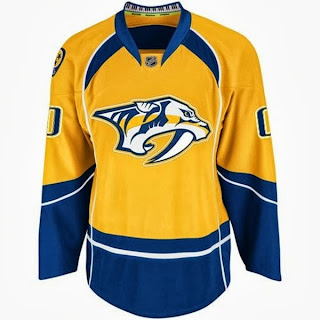 The jerseys are unchanged, but new pants! New socks! These minor tweaks add a bit more yellow to the pleasingly yellow uniform. Nashville could still use a less molesty team name, though. 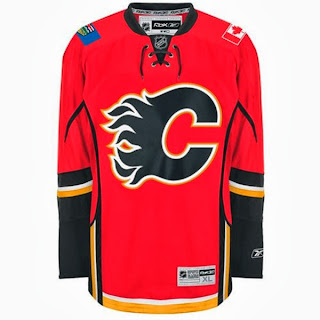 Home and away uniforms are unchanged, but a new third jersey is slated to replace their gorgeous throwback sweater from last season. That throwback uni was so good it should've become the new home jersey, so I'm skeptical the new third jersey can top it. I'll update this list when it's revealed. 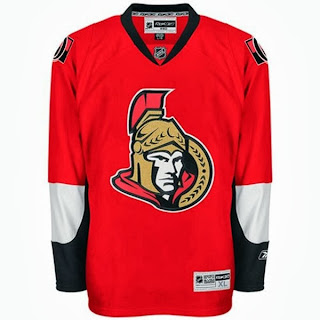 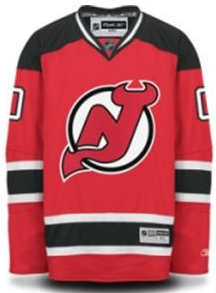 Uniforms unchanged from last season, as always. Boring yet classic. Gotta love the devilish subliminal messaging of the sexy lady in the logo. 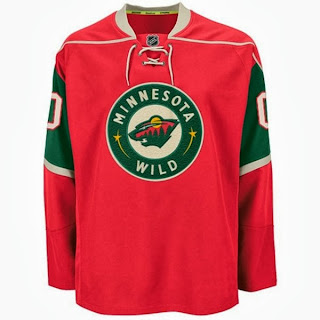 New away jersey. It's perfect. The '90s piping road uniform was the only thing holding Minnesota back, and now they've replaced it with exactly the away sweater everyone wanted. Between the new road uni, the classy home uni, and the retro third uni, the Wild have virtually a perfect uniform set. Now if only they could change their super '90s team name... 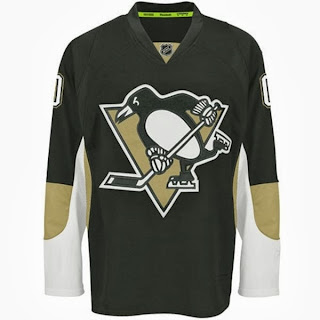 The dark blue third jersey (which I actually liked!) is retired. I love Pittsburgh's classic cartoon penguin logo. The only thing keeping their uniforms from greatness is the pale "Vegas gold" color. If they made it the bright gold of the early Lemieux days, this jersey would easily jump into the top ten. 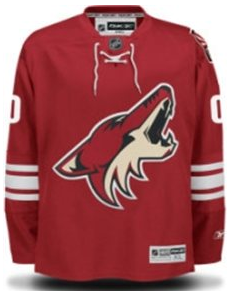 Uniforms unchanged from last season. Still a unique, very Southwestern shade of brick red. I just wish they'd go back to the even more unique, even more Southwestern jerseys they wore in their early days. This is the team's last season as the Phoenix Coyotes; starting in the 2014-15 season, they'll be known as the Arizona Coyotes (and the season after that, maybe the Québec Nordiques?). I've got mixed feelings on this. I greatly prefer city names over state names. If they've got a state name, shouldn't they be playing games across the entire state? But indeed, they don't play in Phoenix. They play in the Phoenix suburb of Glendale, Arizona. 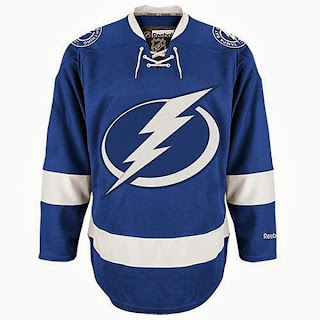 Uniforms unchanged from last season. I just wish they'd get rid of that dumb third jersey. There's nothing worse than a team's nickname on a jersey. That's why it's a nickname, not the real name. 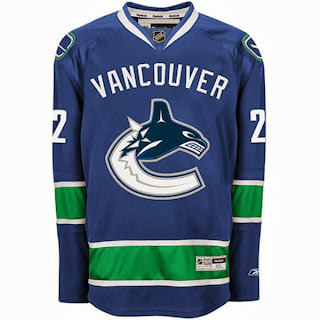 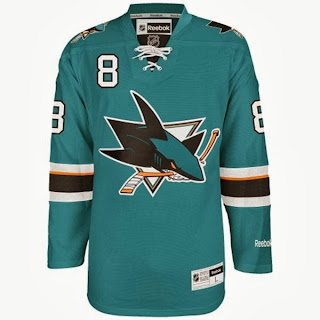 New home and away jerseys! Everything is simplified, and the Black for Black's Sake from their old uniform is gone. I wish the new sweater at least retained the waist stripe and I still think the shark shoulder patches are redundant, but other than that, this is a huge upgrade. More teal is better. Some people hate the numbers on the front of the jersey. I don't really mind. 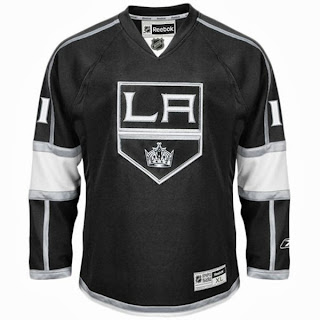 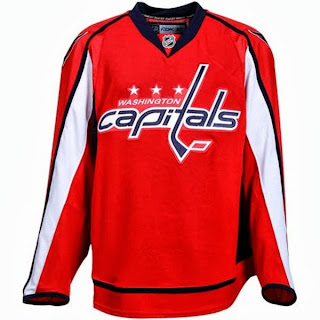 Uniforms unchanged from last season. The team recently announced they'll be hosting the 2015 Winter Classic, and it seems only logical for them to use the red version of their current white throwback sweater. 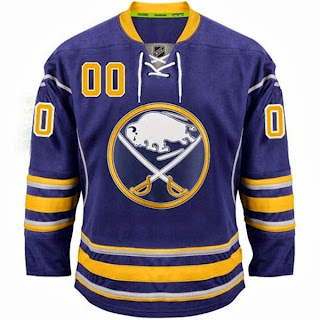 Hideous new third jersey. This alone bumps the team down a spot from last season. I respect that third jerseys are meant for fun experimentation, but it's a huge downgrade from their previous, gorgeous throwback third jerseys. The otherwise-beautiful home and away uniforms would be perfect if they removed the random gray piping and armpit stains. 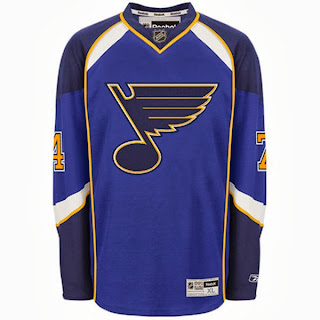 Uniforms unchanged from last season. Many people are pushing for the third jersey to become the primary one, but I love the big note and brighter blue & gold of the existing primary sweater. Some of that unnecessary detailing around the shoulders could go, though. 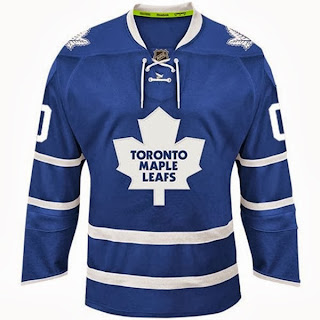 Uniforms unchanged from last season, although they'll be wearing these amazing throwback sweaters for the 2014 Winter Classic. I hope they become full-time third jerseys next season. 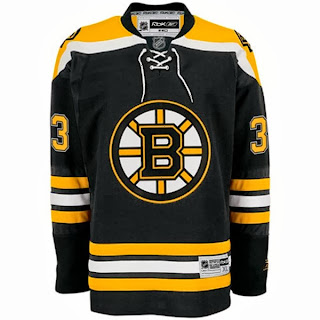 Uniforms unchanged from last season. They really don't need that decent-but-unremarkable third jersey, though. The main home and away uniforms are good enough as they are. 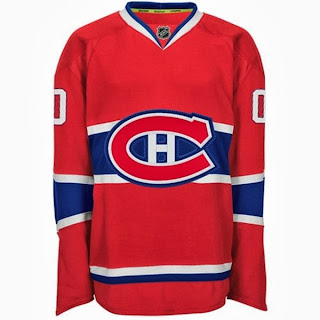 Uniforms unchanged from last season. It's the most historic uniform in North American sports, dating back to 1909 (older than the NHL itself). There's even an iconic children's book and movie about it that's quoted on the Canadian $5 bill. What more can you say? To make a classic jersey even better, this season Montréal has become the first NHL team to include accents, umlauts, and other non-English marks on the jerseys of players like Daniel Brière. I hope the rest of the league follows suit. 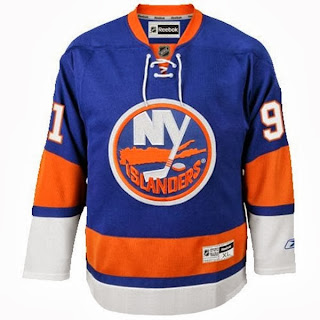 Uniforms unchanged from last season. Next season when the team moves to Brooklyn, they'll be getting a black-and-white "Brooklyn" third jersey to replace the current monstrosity of a third jersey. It'll be in the aesthetically-pleasing vein of the NBA's newly-rebranded Brooklyn Nets, and give the team two distinct color schemes. I wish more teams would embrace this. Los Angeles also does it, with a black/white primary look and a purple/gold throwback look. 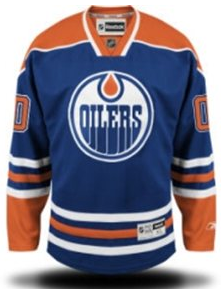 I guess I'm a sucker for blue and orange. The confused former home jersey which had become a third jersey is finally retired. Now Edmonton has essentially a perfect uniform set. 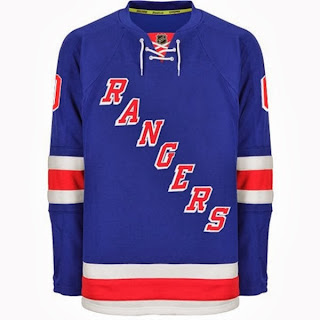 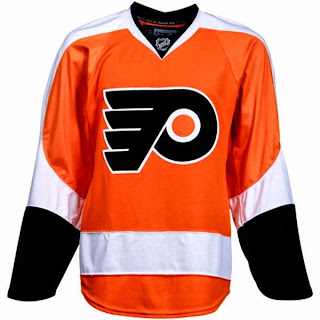 Uniforms unchanged from last season. Essentially a perfect uniform set, as much as I hate the Flyers. 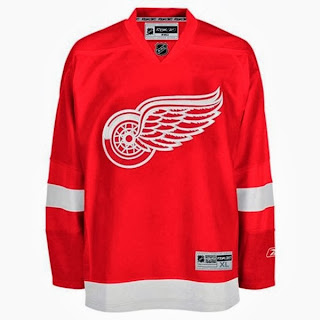 Uniforms unchanged from last season, although they'll wear these gorgeous throwbacks for the 2014 Winter Classic (check out that awesome number font!). This struggling city can take solace in the fact that it has the greatest uniform in sports.

Now tell me how wrong I am in the comments.
by Unknown at 6:28 PM