Lots of comics to get through from a couple weeks ago, so only the best (and the best at being the worst) will get a lot of attention.

-Guardians of the Galaxy #6 (Brian Michael Bendis, Sara Pichelli, Olivier Coipel)
This isn't a good issue.  It's not a particularly bad one either, but it's just not good.
Some notes I made while reading the latest GotG:
Okay, I lied this is a bad issue, at least from a story and continuity standpoint.

-Uncanny Avengers #12 (Rick Remender, Salvador Larroca)
Larroca taking over art duties is not what I would call ideal.  A weaker entry in a story that overall I enjoy.

-Deadpool #17 (Brian Posehn, Gerry Duggan, Declan Shalvey)
North Korean prison camp hijinks continue to be illustrated marvelously in this issue.  One of Jake's big complaints about Marvel comics is that whenever Captain America shows up he's an asshole.  We're treated to a counterpoint within these pages as Cap's memories of WWII motivate him to act in a truly heroic fashion resulting in the line, "This can't be a an Avengers mission, but it must be a job for Captain America." 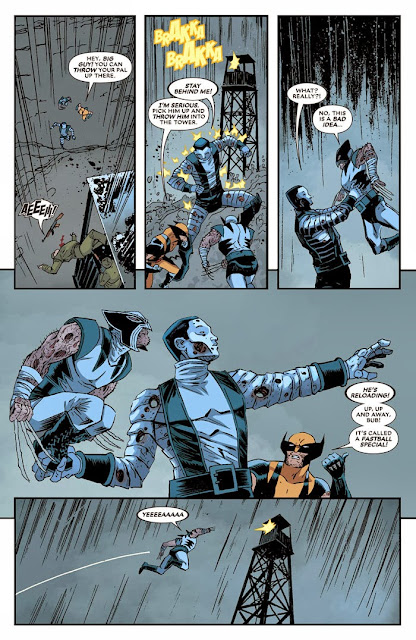 -Avengers #20 (Jonathan Hickman, Leinil Francis Yu)
Space Operatic elements manage to keep me enthralled even as the plot and general direction of the story lose steam and direction.

-Nova #8 (Zeb Wells, Paco Medina)
A rebirth for the New Warriors might be on the horizon if Nova can manage to not get killed by a super creepy chick that sleeps in the guts of weird space cows.  It seems Nova has moved firmly into rad superhero stories territory.  Ok, I might be riding on a high brought on by the mention of the original Nova (a favorite character of mine), still the trajectory of this series into downright fun superheroics.


-Justice League #23.4: Secret Society #1 (Geoff Johns, Sterling Gates, Szymon Kudranski)
Someone probably thought this was a clever story that needed to be told.  I am not that person.

-Aquaman #23.2: Ocean Master #1 (Geoff Johns, Tony Bedard, Geraldo Borges)
Any subtlety or nuance in Ocean Master's character that was present in the Justice League/Aquaman crossover "Throne of Atlantis" has been thrown out the window.  Nothing else is of note as this issue continues the disappointing, but not wholly unanticipated trend, of being another sub-par entry in the gimmick that was Villains' Month.

-Action Comics #24 (Scott Lobdell, Tyler Kirkham)
The Psycho Pirate is back.  That's cool.  This is part 2 of a crossover that started in Superman?  That is significantly less cool, in fact that might be the exact opposite of cool.  There's a month of one-shot sidestories without Superman, and then when it's time for a "real" issue it's part 2 of a story taking place in a different comic book?  Nah, I'm cool.


-Saga #14 (Brian K. Vaughan, Fiona Staples)
Flying space sharks get hunted with a telescoping lance, and Lying Cat shares a scene with Sophie (formerly Slave Girl) that could warm even the coldest of hearts.  Stuff is kept relatively mundane, but even so Fiona Staples manages to flex her artistic might; it's just channeled into emotions and facial reactions as opposed to fantastical settings.

-East of West #6 (Jonathan Hickman, Nick Dragotta, Frank Martin)
A Judge Dredd/Punisher/Texas Rangers mashup?  Oh hell yeah.  The issue seems like an aside that isn't all that important, however the awesome western elements more than make up for that.  Have I mentioned how amazing the artistic design of East of West is?  Because from a design standpoint it continues to be a nearly flawless comic. 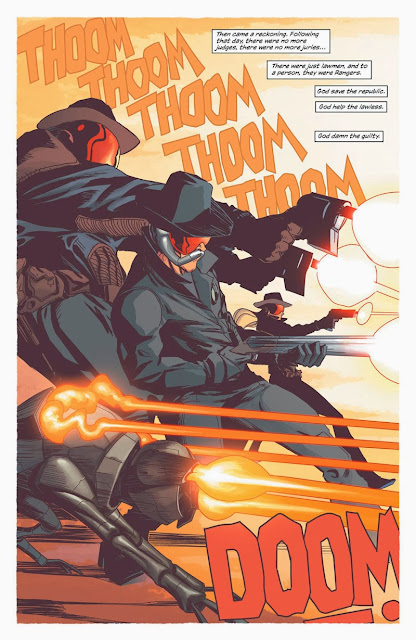 
-G.I. Joe #8 (Fred Van Lente, Steve Kurth)
Shipwreck shoots boats full of androids trying to suicide bomb the statue of liberty with a bazooka.  blah blah blah... Destro is full on crazy supervillain and has androids (of the same design as the combat ones shot by Shipwreck) dressed in maid and butler outfits as he uses failed underlings as clay discs for his routine skeet shooting.  Can someone explain to me why there isn't a G.I. Joe cartoon on my television right now? 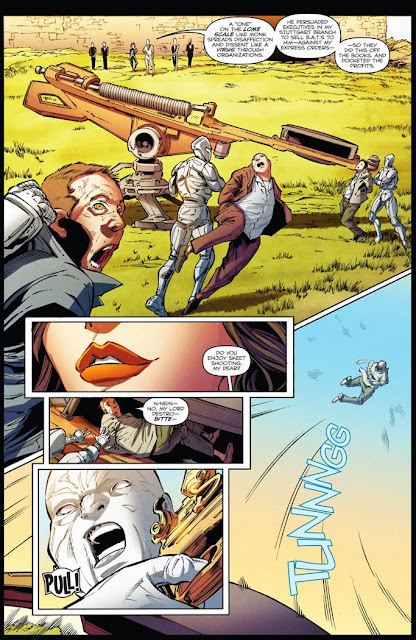 
-Mobile Suit Gundam: The Origin volume 3 (Yoshikazu Yasuhiko)
Like the two previous volumes, there is some stiff translation and different interpretations of certain iconic(memetic) lines that hold this release back somewhat.  The rest of the book more than makes up for this slight misstep, and really, Yas is such a skilled visual storyteller that the book could get by without a hint of dialog (note: I still like the words because they add a depth and insight into the characters).  Volume 3 takes its subtitle from Ramba Ral, a veteran enemy officer sent to Earth to destroy the ship and its inexperienced crew that make up the main cast.  I don't want to go into the gritty details because you either have an understanding of what great twists and turns the story takes at this point, or you don't know and I'm not going to be the asshole to spoil a 34 year old cartoon for you.  Most Gundam aficionados count Ramba Ral as a fan favorite though, and I'm no different.  There's a buttload of deep thematic elements tied to Ramba Ral that I could discuss at length, however there's also the old takeaway that war is hell.  It's worth noting again that Yas makes this hellish war look oh so good.