-Thanos Rising #5 (Jason Aaron, Simone Bianchi)
The foolhardy and brave decision to place this comic at the top of the weekly read pile was based on the theory that every comic I read after it will be better, so might as well start off with the turd.  I stand by this decision, but it caused me to put off reading comics for a couple hours.  Boy was it bad.  Instead of resorting to offensive language might I suggest that Marvel offer reparations for all the poor souls who went into this mini-series expecting a passable story about Thanos.  Passable was all I needed; it didn't need to be good for I knew to lower my expectations since our world is one with such little goodness left.  It didn't have to be good dammit.

-New Avengers #9 (Jonathan Hickman, Mike Deodato)
Completely unfair reviews returns.  I've a better grasp as to what Infinity is so the lack of fairness is only partially based in not having read all the important pieces of the story.  The main factor in the bias is that I had to read an issue of Thanos Rising.  Someone has to take the fall for this affront, and an event in which Thanos is a key player seems to be a good candidate.  Therefore, damn you New Avengers.  Damn you to hell.

-Captain America #10 (Rick Remender, John Romita Jr.)
Hey would you look at that, a good story came to a close as well.  Hopefully I'm not tarnishing the great memory of the late Jack Kirby, God rest his soul, when I say that this opening story arc of the new Captain America series is very Kirby-esque.  The way Cap finally escapes the clutches of Arnim Zola and his army of science mutates caught me by surprise.  Issues 1-10 have been thoroughly enjoyable, and now it seems that they were all meant to set up something else.  You bet that has my attention.

-Deadpool #15 (Brian Posehn, Gerry Duggan, Declan Shalvey)
With the departure of the White Man, the super pimp villian from the past 2 issues, from center stage the comedy is toned down a bit.  Deadpool is still a funny comic, but it's now an action comedy (not the comedy action that it sometimes is).  Shalvey is really adept at action too.  The 2 pages where Deadpool and Cap are fighting side by side says says a lot, and the final sequence where Wolverine and Deadpool fend of a hit squad is nearly flawless in its execution. 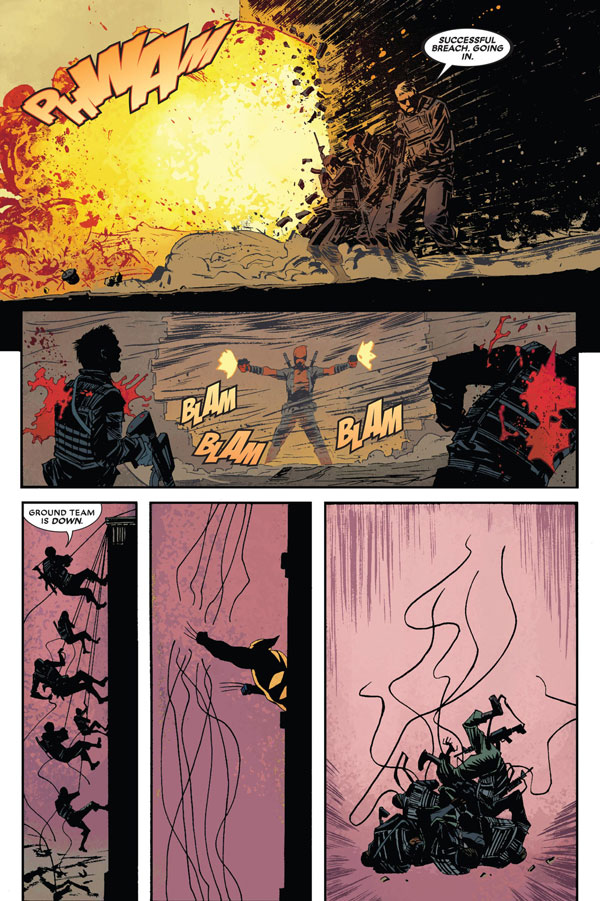 -Uncanny Avengers #11 (Rick Remender, Daniel Acuña)
If there is one comic that is firmly moored and connected to years of Marvel continuity then it's Uncanny Avengers, and yet the book is still accessible (accessible as mainstream superhero comics can be).  Acuña's art continues to be one of my favorite parts of the book, because let's face it, he and Remender produce some stellar work.  Big things look like they're gonna go down next issue now that Thor and Wolverine have been taken off the board.  Fans of Sunfire, if you exist, should be happy that it looks like he's about to open up a can of whoop ass in the next installment. Wasp Watch: she maintains her status of "completely hateable" while receiving only 2 speech bubbles.

-A+X #11 (Mike Benson, Mark Texeira, Jim Krueger, Ron Lim)
Some might argue that A+X as a concept is a throwaway comic.  I would try to have a reasonable debate with these people, but more likely than not it would result in a yelling contest.  By yelling contest I most certainly mean a silent misconstrued exchange via an image board.  That said, this issue feels like one of the more throwaway ones to me for a few reasons.  There is a story where Thor goes to a realm where he could fight and destroy monsters with reckless abandon, but he's reined in way too much.  No use trying to hide it, my passionate disdain for Cyclops and natural uncomfortable-ness with Doc Ock as Spider-Man clouds my judgement.  A nice ending awaits those that can make it past the insufferable asshattery that is Cyclops.

-Justice League #23 (Geoff Johns, Ivan Reis)
And now, another installment of Completely unfair reviews, except for the fact that my assement is fair just not entirely informed.  DC's six-part Trinity War crossover event comes to a close in this issue of Justice League.  The only other part that I have read is the first one in JL #22.  Having read these two parts, I believe I am well within my right to say Trinity War was a pile of straight doodoo.  I guess six issues of "heroes" being dicks to each other is necessary to set up another event where these "heroes" have to fight their evil counterparts from an alternate dimension.  Heroes vs. evil counterparts is a comic I would like to read, but the way the story got there without even a hint of levity and treating everything like it's super serious is not something I want to read.  Also heroes being dicks is some dicks.  Marketing gimmicks > good stories to DC management apparently.

-Aquaman #23 (Geoff Johns, Paul Pelletier)
Hard to believe that one man could write a stinker like Justice League and also be responsible for another comic that I consistently enjoy.  A story comes to a conclusion in this series too, and I'm pretty stoked to find out what comes next.  Not to spoil things too much, but what I'm most stoked for is the certain addition to Aquaman's face area.  The same things that I've enjoyed about past issues of Aquaman are on display here.  It's my monthly chance to say true things like "Pelletier can draw the hell out of things underwater."

-All Star Western #23 (Jimmy Palmiotti, Justin Gray, Moritat)
Weird political messages can probably be gleaned from this particular issue of All Star Western.  Seriously, an important dialogue could be opened up by examining what Jonah Hex is trying to convey.  Though I can't really blame anyone if they just want to enjoy this comic for all the "1800s bounty hunter in modern city" adventures that rest between the covers.  In summation, DC's best book continues to be DC's best book.

-G.I. Joe #7 (Fred Van Lente, Steve Kurth)
Here's a breather issue with only one real sequence of action, well done action that organically ends in a fake out.  That's a good thing though.  G.I. Joe has been rocking nonstop for six issues it seems, so things needed to get shaken out some.  The expositionary introduction of the Mad Monk, Cobra's new operative, has got me genuinely curious as to what manner of misfortune he has planned for the heroes.  If "Snake Eyes" stylin on the rest of the Joes, Baroness being sexy, Destro scheming, and old war stories are your thing then chances are you're already a big fan who is buying the comic, but if not why aren't you reading G.I. Joe?