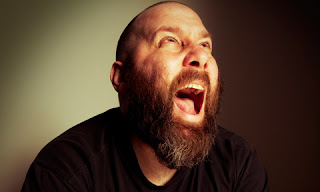 For some reason or another, I've been writing a lot about rap lately. But while Wale brings the more mainstream go-go-infused D.C. hip-hop and Boots Riley makes more political rap-funk, Sage Francis does his own thing. The Rhode Islander's music is much closer to slam poetry, with music backing all over the place that reminds me slightly of Gorillaz. I like all these rappers for different reasons, and Sage Francis has the most biting, bitter, cynical one-liners of all.

You can't be exposed to Sage Francis without noting his appearance. He's about the polar opposite of what you think of as a rapper: a bald, fat white guy with a huge beard. He got into rap at first through being one of the biggest figures in the Providence, RI slam community. As far as indie rap today goes, he's one of the best.

His newest album, Li(f)e, is almost a spiritual counterpart to 2007's magnificent Human the Death Dance. While Human the Death Dance is incredibly angry and sad, Li(f)e (which came out this May) is much more uplifting and hopeful. It reminds me of the way Radiohead's Kid A is "everything falling apart," and their following album, Amnesiac, is everything coming back together. Sage Francis is always very philosophical in the topics he writes about and there's still ample cynicism here, but now there are more songs about, well... life. The lead single from the album, strangely enough, is the final track, "The Best of Times." It's a chronicle of his life up to this point, reminiscing about being a kid. There's no way you would have seen this track on Human the Death Dance, but they're both great albums. 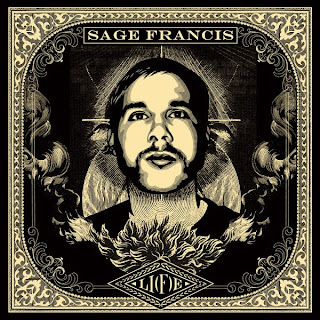 There are also a lot of songs on this album that tell stories. The album opener, "Little Houdini," is the story of a man breaking out of prison and committing horrendous crimes just to get back to see his mother again, who's dying of a terminal illness. "Three Sheets to the Wind," which has a fantastic thumpin' bass line, is more of a conversation with God. I've noticed a motif throughout Sage Francis' work is a connection between God and sexuality. At the end of "Civil Disobedience" on Human the Death Dance, he has a rambling one-sided dialogue with God:

"And to you: I know you. I know you much better than you think I do. I hope we meet sometime. I'd love to shake your hand and, um... maybe get a kiss right there, on my face. And uh, I don't know... maybe have sex a little bit."

The idea of sex with God is one that probably makes some people feel a little uncomfortable, but I love it in how jarring and powerful it is. It's a reference back to the days of Greek gods, who would sleep with mortals all the time. In "I Was Zero" on his new album, Francis raps:

"I find my part of the problem in part of me

There's always been a difference between who I am and who I want to be
It's either 'Jihadist freak' or 'Jesus seamster'
I heard God is coming, and she's a screamer."

But I think my favorite line of the album is a simple one that comes from the very eerie "16 Years," another song tracing back his life to high school.