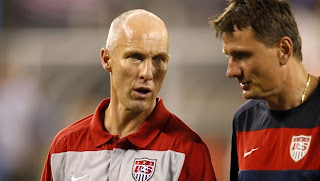 If you watched Brazil's mostly-rookie squad spank the mostly-intact-from-the-World-Cup U.S. soccer team 2-0 last night, you may have seen Bob Bradley's last match as head coach. Since our Round of Sixteen loss to Ghana a month ago, his days have been numbered. Last week I wrote about Soccernomics' analysis of managers, so let's take a gander at Bob "Professor X" Bradley's potential replacement.

The name popping up most is Jürgen Klinsmann. As a player, the German helped die Mannschaft conquer the 1990 World Cup and the '96 European Championship (and he played 46 games with Tottenham!). As manager, he coached Germany to third place in the 2006 World Cup, and went on to coach Bayern Munich until '09. He's currently unemployed, but Americans may know him as one of ESPN's analysts during the World Cup this summer (as a side note, say what you will about ESPN, but they handled this World Cup masterfully). 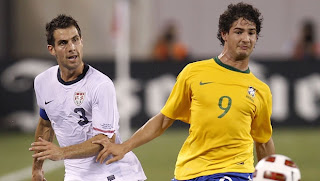 He'd make a great choice. As Soccernomics describes, no matter how much demographics change, continental Western Europe is still the heart of soccer. On average, German and Dutch managers are some of the most successful in the world. Many opponents to Klinsmann taking the job would say they want an American to coach America's team, but nationalism is a crutch. It's sort of an "affirmative action for coaches," where someone will get picked because they're the right nationality instead of because they're right for the job. On a club level, Inter Milan won Champions League this year with a non-Italian manager and a bunch of non-Italian players. Obviously with national teams the players must be from the country, but not the coach.

Klinsmann explained after the U.S. loss to Ghana that one of the biggest issues with U.S. soccer is the whole way our soccer system is structured. Kids are playing in full 11-on-11 games at a very young age and are great team players, but they lack any of the individual skill of greater soccer nations. In countries like Brazil, children simply play on courts and fields alone or with a couple friends, and they don't play full 11-on-11 matches until they're around 12 years old. This gives them not only more individual skill, but better soccer instincts. The fact that Klinsmann could point this all out hugely impressed me. I'm sold on the German for USA.

A more positive note from the hubbub around the U.S.-Brazil match--Nike released a new U.S. Soccer viral video. Watch for yourself:

This is exactly what they should be doing. I feel like this is "Compliment Major Corporations Day" for me, but the commercial represents a ton of money and effort poured into U.S. soccer. I wrote last week about their fantastic work promoting the underdog ideals of "Don't Tread on Me," and it continues with this video. As a film major, I love that Nike consistently creates intricate cinematographic experiences. But why target so much of it specifically at the non-traditional American soccer fan? It's investment toward the future: soccer is on the rise in the United States. The country is becoming more multicultural and soccer-friendly, which rubs off on the rising quality of the U.S. national team, which rubs off on Nike's sales. 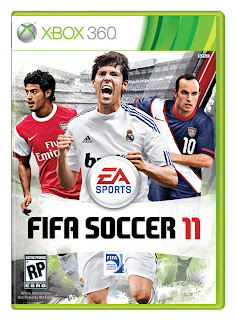 Speaking of major corporations' investment toward the future of U.S. soccer, EA Sports revealed today Landon Donovan will be on the cover of FIFA 11 in North America, along with Kaka and... Carlos Vela? Why Carlos Vela of all people? Anyway, this box art is reminiscent of the FIFA 07 cover. Both the first FIFA titles immediately following a World Cup, they share strikingly similar covers:

It's great to see Donovan in his U.S. shirt on the cover. It's no coincidence, as EA believes the United States will be the biggest market for soccer video games in the future. Englishman Matt Bilbey, VP of EA Sports Football, says: "The U.S. market was our No. 4 in the world four years ago. This year it will be our No. 1 market." I don't know if I believe we'll surpass the U.K. this year, but definitely in the near future. Clearly, EA believes in U.S. soccer.

One issue I have with the cover, though, is their choice of Donovan USA jersey: the blue away kit. It's the one mistake Nike made this year. There's nothing wrong with the shirt itself, but the way it was marketed. The away kit was released months before the equally smart white home kit, and because of this, looking at fans at a game or on the streets, you see far more people wearing blue jerseys than white jerseys. Why would you make the away kit more famous than the home kit? If Nike preferred the blue shirt so much, why didn't they just make it the home shirt? Alas, that's life. And that's why Landon Donovan shows up in blue, not in white, on the cover of FIFA 11.