Let the Right One In: Swedish vampires and their American imitators 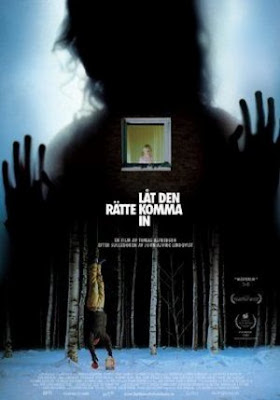 With the connotations the term "vampire movie" has garnered the past couple years, I wouldn't say I'm a fan of vampire flicks at all. But 2008's Let the Right One In is a breed apart. It's a beautifully shot, stark film based on a 2004 novel by the same name about kids growing up in a snowy town in the early '80s. Låt den rätte komma in, as it's known in Sweden, was a surprise hit outside of its home country, and won a ton of awards all over the world for a relatively unknown director named Tomas Alfredson.
Only two years later, a U.S. remake is in the works, and fans of the original film are crying foul. Americans are dumb and don't want to read subtitles! They're totally ignorant of the rest of the world! They don't appreciate good cinema! The makers of the upcoming American version, known simply as Let Me In, say it's based on John Ajvide Lindqvist's novel and not the first film adaptation, which means it will be different from Let the Right One In. But the first trailer for the remake has been released, and it seems eerily similar to the original Swedish film. Even the actor who plays the main character looks so much like his Swedish counterpart (albeit with brown hair instead of blonde), it's uncanny. Let's take a gander. Here's the trailer for the original Swedish masterpiece:
Now here's the trailer for the upcoming American Let Me In, set to be released October 1st of this year: 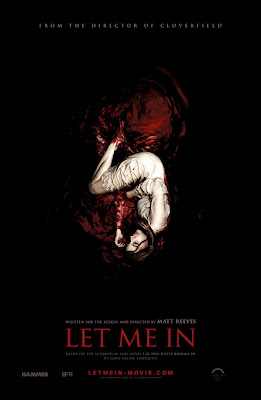 Pretty similar, eh? Some are even calling it a "shot-for-shot remake." But before we jump to all these conclusions, let's get some perspective. American remakes of foreign-language films that were released only a few years before isn't uncommon, and it isn't always a bad thing. Martin Scorsese's 2006 film The Departed is often cited as one of the greatest movies of all time, and it's a remake of a Hong Kong flick from only four years earlier called Infernal Affairs.
So although I'll be a huge skeptic, I'm sure I will go see Let Me In as soon as it hits theaters in October. After all, it is directed by Matt Reeves, the man at the helm of Cloverfield. A lot of people weren't a fan of the handheld monster mash, but it's one of my favorites. Even if it's not as good as the original (and it probably won't be), I'm sure Let Me In won't be a simple shot-for-shot remake.
While I'm on the topic of Let the Right One In, I'd like to take a moment to greedily cross-promote and show you a video I made last year. If you haven't seen the movie, it won't make much sense, but if you have, I've taken the original and put together an all-new trailer, turning it into Christmas Family Fun for All without actually changing any of the shots.
by Unknown at 5:05 PM

Email ThisBlogThis!Share to TwitterShare to FacebookShare to Pinterest
Labels: film, Let Me In, Let the Right One In