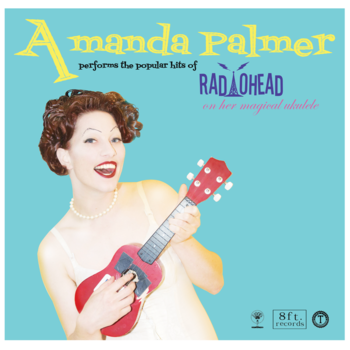 Amanda Palmer Performs the Popular Hits of Radiohead on Her Magical Ukulele is Amanda Fucking Palmer's first full release since leaving Roadrunner Records, the six-year home of her band the Dresden Dolls and her solo project. She had a tumultuous relationship with the label, who supported the Dolls in full when they released their debut but left the band in the dark immediately after the release of their second album. Now she's releasing an EP of Radiohead covers. On ukulele. And it only costs 84 cents, unless you want to donate more. Buy it.

AFP has a very polarizing voice. It's very deep for a female singer, and her sort of brash style goes against classical music thinking. My brother (who's in a choir) absolutely despises her, but I love it. Being both a big Dresden Dolls fan and a big Radiohead fan, I went into this expecting a lot. Let's take a gander at the EP, track by track. The links in the titles go to the original Radiohead songs. 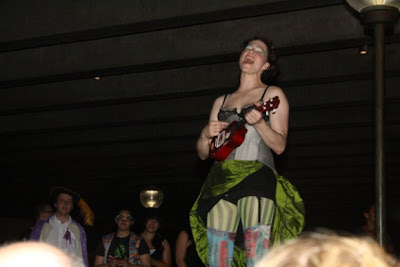 If you buy the EP from her website you get a bonus track, "Creep" (Live in Prague), but it's not "officially" part of the album so I'm not taking it into account when judging the work as a whole. As an aside, it's a good track, but not as great as her "Hungover at Soundcheck in Berlin" version. Anyway, the first half of Amanda Palmer Performs the Popular Hits of Radiohead on Her Magical Ukulele is only okay, but the second half more than compensates. And it's all only 84 cents, cheaper than a single song on iTunes, so I don't know why you wouldn't buy this album. Buy this album.