Nintendo GameCube: the most underrated console ever made

Everyone loves to make fun of Nintendo's purple little box, with its half-size discs and handle on the back. They disparage its fundamental misunderstanding of the gaming market at the time, from lower horsepower than its competitors to lack of online play to a focus on "kiddy" games. It didn't have the huge library that Sony's PlayStation 2 had, and it didn't have the edgy first-person shooters that Microsoft's Xbox had. 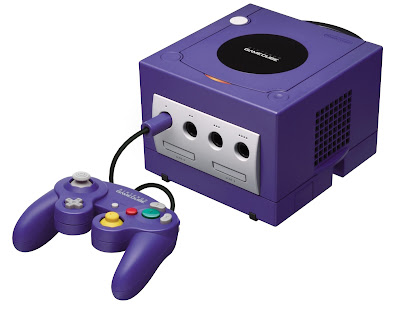 Let's start with the console itself. It's a work of art. While most other consoles look like drab cable boxes, GameCube launched in a pleasant violet color. And everything is exactly where you think it should be. The controller ports are big and right in front, and the discs go right in the top.

The controller is the most ergonomic official first-party controller ever made for a console. It slides into your hands like butter and fits them like a glove. The shoulder triggers are lush and analog, and the satisfyingly large green "A" button is front and center where it should be. The "B" button is smaller and red, as it should be. The Start button is right in the middle, where it should be. None of this superfluous Select button shenanigans. When was the last time you actually needed a Select button? Not to mention the WaveBird, wireless years before Sony or Microsoft produced wireless controllers. 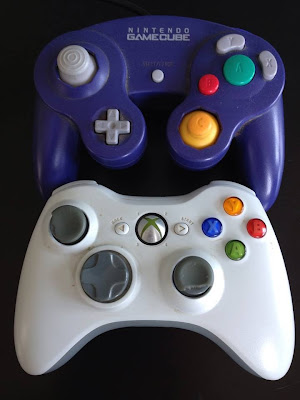 But a great console is nothing without great games. Games trump all.

What about the launch lineup? When the GameCube came out in 2001, it launched with Star Wars Rogue Squadron II: Rogue Leader, one of the best Star Wars games ever made. And despite being a launch title on an underpowered platform, its cutting-edge graphics still stand out today.

Its other major launch title was Nintendo's own Luigi's Mansion, which I've written about before. It was disparaged at the time because it wasn't a "real" Mario game, and the GameCube was the first Nintendo console not to launch with a Mario title. But Luigi's Mansion flipped convention and used the more interesting Super Mario Bro as its protagonist.

Luigi is shy, unsure of himself, cowardly, which all makes him... human. A much more interesting main character than main man Mario. Luigi's Mansion was able to succeed as a survival-horror game while still being kid-friendly, something rarely seen in gaming.

Perhaps the greatest metaphor for the GameCube in its library is Super Mario Sunshine. It's by far the most widely criticized entry in Nintendo's main Super Mario series. People complained it wasn't a "true" Mario game because of its focus on story and Mario's role as a glorified janitor, cleaning up graffiti around a tropical island.

But isn't Mario's actual profession... plumbing? Not exactly world-saving fare. Super Mario Sunshine took the series in a new direction, providing a unique gameworld for Mario to explore while still giving players a challenge with the platforming segments.

Today, Nintendo is criticized for recycling its Mario formula with predictable entries like New Super Mario Bros. 2 and New Super Mario Bros Wii. I firmly believe Nintendo only started doing this because it got so much crap from everyone for actually trying something new with Sunshine. At the end of the day, Super Mario Sunshine is hands-down the best Mario game.

Nintendo also took its Legend of Zelda series in a new direction on the GameCube. When they announced The Legend of Zelda: The Wind Waker would be cel-shaded and cartoony, Nintendo took a heap of criticism for dumbing down the venerable Zelda name. But when it was released, The Wind Waker was a creative, well-written gem with a unique seafaring setting. Today, Wind Waker is rightly lauded as a bold step in a new direction for the series.

My personal favorite, Metroid Prime is much the same way. Nintendo took a beloved series that had been dormant since 1994 and made it a first-person game. Many fans, myself included, feared this would be a simplified, stupid first-person shooter to appeal to the popularity of Halo. Instead, what we got is perhaps the greatest game ever made. A first-person adventure that stays true to its Metroid roots while courageously taking the series in new directions. I think I like this game. I think I've written about it before.

Nintendo is criticized for all the best-selling games on its consoles being games made by Nintendo themselves. The critics are right, but Nintendo makes some damn fine games.

The definitive versions of perennial multiplayer favorites Mario Kart and Super Smash Bros. are both on GameCube. Mario Kart: Double Dash!! refined the series without dumbing it down for the casual crowd like Mario Kart Wii would. And Super Smash Bros. Melee is still so widely loved that the twelve-year-old game was one of the games played at this year's Evo Championship Series, the most important fighting game competition in the Western world.

Mario Kart isn't the only classic Nintendo racing game on GameCube. F-Zero GX was overlooked by most people, but among hardcore racing fans it's considered one of the toughest, most brutal, greatest racing video games ever made. GX still hasn't seen a sequel.

Speaking of "niche, brutal Nintendo games," Fire Emblem: Path of Radiance was the first 3D entry in the series, and the first home console release of Fire Emblem outside Japan. It's a hardcore tactical role-playing game with permadeath--a game mechanic popularized by DayZ in 2009, but used by Fire Emblem for decades!--that flew under the radar of most gamers.

But GameCube didn't just have great sequels. Animal Crossing and Pikmin are both colorful, genre-bending, kid-friendly-but-deceptively-deep series with devoted fanbases, with their beginnings on GameCube. Today, both series are major players for Nintendo.

It's not all games for kids, though. Hideo Kojima remade his seminal Metal Gear Solid with The Twin Snakes, exclusively on GameCube. Eternal Darkness: Sanity's Requiem was a milestone in psychological horror, surprisingly published by Nintendo. And outside Nintendo, there's Capcom's beautiful remake of the original Resident Evil, and of course... Resident Evil 4.

Resident Evil 4 is widely considered one of the best games ever made. It eventually landed on other platforms, but it was designed for GameCube. RE4 was part of the "Capcom Five," GameCube-designed games that inevitably ended up on other consoles to make more money. Other members of the Capcom Five? Killer7 and Viewtiful Joe. Ya know.

Speaking of games designed for GameCube then ported elsewhere, there's the home console release of the Greatest Shoot 'Em Up Ever Made, Treasure's Ikaruga. Nintendo is slammed for its lack of third-party support, but in fact, many of the generation's greatest multiplatform releases came to GameCube. Beyond Good & Evil, SoulCalibur II, Prince of Persia...

With the Wii and Wii U, Nintendo has gone in a different direction. The GameCube represents its last attempt at a traditional console. It was misunderstood and glorious. Don't hate on the purple box. It may not have the staggering volume of games that PS2 had, but its games have certainly aged more gracefully than the Xbox's library. One day, GameCube will get the respect it deserves.
by Unknown at 3:22 PM