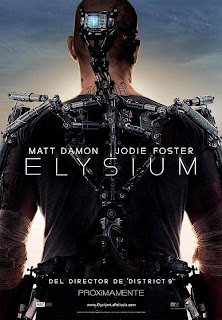 I expected the worst when I saw the first trailer for Elysium. South African director Neill Blomkamp's previous movie, District 9, is one of my all-time favorites: a metaphor for apartheid in a grimly beautiful science fiction Johannesburg. It's one of the first things I ever wrote about for this blog! Elysium just looked like a shallower District 9 with a big Hollywood star, Matt Damon, tacked onto it.

But Elysium delivered. If you couldn't put 2 and 2 together from the trailers, it's a metaphor for class inequality. All the rich people live on the utopian space habitat Elysium. Everyone else is stuck on a polluted, impoverished Earth. It explores the themes of immigration, both by poor Latinos to the United States and by rich white people out to the suburbs.

I didn't realize going into it that Elysium would be so specific and political about America's treatment of undocumented immigrants. Set in a dystopian Los Angeles where the upper class is gone entirely, it's become a predominantly Latino city. The futuristic robot cops patrolling the streets are emblazoned not with "POLICE" but with "POLICÍA". Many of the early expositional scenes are entirely in Spanish, and the de facto language of Los Angeles has become Spanglish.

I loved this. The marketing didn't hint at it at all, but it's a very honest way of dealing with racial inequality in the U.S. But that leads to my #1 problem with the film: Why wasn't Matt Damon's character played by a Latino actor instead?

Damon's acting is great, but the part of protagonist Max Da Costa seems like it was written almost exclusively for a Latino actor. Nearly the entire supporting cast are Latino, and Matt Damon even speaks some Spanish to his friends in the movie. Yes, of course in real life there are Latinos of European descent with white skin and blue eyes like Damon, but Matt Damon isn't hispanic. This would have been the perfect opportunity to advance the career of an up-and-coming Latino actor, but instead we're left with the status quo: White Protagonist Saves the Brown People, an unfortunate trope we see all too often today, one we've even already seen this summer with The Wolverine.

I would say Blomkamp only made the decision for box office sales, but Matt Damon was his third choice for the main character. Blomkamp's first choice was Eminem (hey, he was decent in 8 Mile!), who turned it down because he insisted the film be set in his native Detroit. But Blomkamp's second choice was... Ninja, frontman of the South African rap-rave group Die Antwoord, who turned it down because he didn't want his first film role to be with a fake American accent. I absolutely love Die Antwoord, but I don't think they exactly carry name recognition with most American filmgoers. So obviously Blomkamp was willing to cast a slightly more obscure actor in the main role. It's a bummer he didn't choose a hispanic actor, especially as Latinos become a more widely accepted part of the American cultural patchwork. 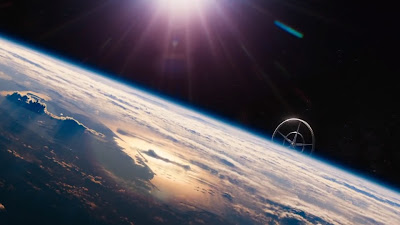 You could argue District 9 did the same thing. For a film set in predominantly-black South Africa, the main character was played by white South African Sharlto Copley. But I think it was more justified in District 9, as the racial preconceptions of the white main character are a major part of the storyline.

Speaking of Sharlto Copley, he plays an awesome antagonist in Elysium. I'm a big fan of directors using the same actors in multiple films, and it was great to see Copley go from playing the office-nerd protagonist Wikus in District 9 to the scruffy evil dude Kruger in Elysium. One of my favorite parts of District 9 was that it took us to a unique part of the world we hardly ever see in mainstream cinema--Johannesburg, South Africa. And while the blockbuster Elysium is set in the more predictably box-office-friendly location of LA, Copley's character gives the film a bit of signature South African flair. 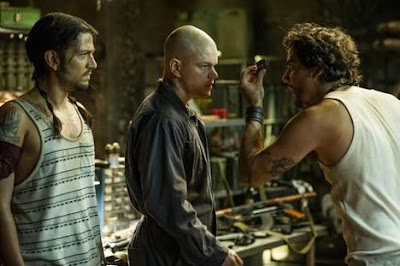 But Copley's character isn't the "real" antagonist of the film. That role falls to Jodie Foster, playing Elysium Secretary of Defense Jessica Delacourt. She represents the people who want to deport all undocumented immigrants and build a wall between the U.S. and Mexico. She has the opportunity to become a deep, complex character, but gets far too little screen time. The movie instead focuses on the action of Matt Damon and Sharlto Copley beating each other up.

Elysium is without a doubt a male-dominated movie. The only other female characters in the film are Matt Damon's love interest who becomes a non-factor as the inevitable Damsel in Distress, and her sick daughter who Damon's character of course has to save. They're literally locked in a closet while the men do all the talking. For such a forward-thinking director like Blomkamp, this is a huge letdown. Couldn't we have at least seen Jodie Foster's evil character beat some people up or something? As an antagonist, she comes off as totally inept when the chips are down.

Like District 9, Elysium features breathtaking cinematography. Unlike most modern action movies which choose to be dark and rainy most of the time to obscure any shortcomings in the CGI (I'm looking at you, Pacific Rim), Blomkamp's films take place almost entirely in broad daylight. As a result, we get to soak in every inch of the films' otherworldly designs. I only wish Elysium hadn't featured its occasional "realistic" shaky handheld shots, which sometimes took the focus away from the great fight choreography.

The art design in the film, as to be expected from Blomkamp & Co, is absolutely jaw-dropping. He hits this unique balance established in District 9 of wistful futuristic technology mixed with real-world dilapidated grittiness. The sci-fi enthusiast in me was crying with joy through the entirety of Elysium. It's almost too good; the designs of both Elysium and dystopian Earth were so interesting that I wish there had been more world-building and exposition at the beginning of the movie.

Elysium is no District 9, but it easily exceeded my expectations. It's by far my favorite mainstream movie of 2013 up to this point. It's a message about immigration, it's a message about the suburbs, and it's a damn good action sci-fi romp. I can't wait to see what Neill Blomkamp does next.
by Unknown at 11:05 AM