-Deadpool #11 (Brian Posehn, Gerry Duggan, Mike Hawthorne)
Hijinks continue to ensue as Deadpool runs down a creep who sold his soul so that he could perv out. The comedy action remains to hit the right beats and stay fresh.

-Wolverine and the X-Men #31 (Jason Aaron, Nick Bradshaw)
We get a look inside the Hellfire Academy for future evil mutants. Wolverine will eventually get his claws into this new Hellfire Club, and the way Aaron is building to it will make that moment so much sweeter.

-Uncanny Avengers #9 (Rick Remender, Daniel Acuña)
I wonder if there are people reading this that didn't read Uncanny X-Force? Read that first if you haven't and catch up on this, because Remender is in for the glorious long haul. 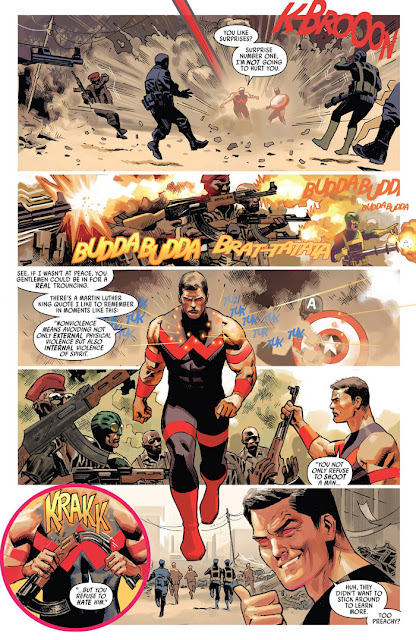 -Superior Spider-Man #12 (Dan Slott, Christos Gage, Giuseppe Camuncoli)
Superior is still an interesting read, and it still is something I wouldn't hand to a kid who wants to read a Spider-Man comic.  Not necessarily because it is "mature," but because I want kids to see superheroes as heroic. Setting out to end someone's life is certainly not heroic (it can still make for a great comic if that's your thing).

-New Avengers #7 (Jonathan Hickman, Mike Deodato)
Where are we going? Not too sure. Chances are in a circle, maybe even a concentric one.  Despite the ridiculousness of it, I wish I could study international relations in the 616 universe since I'd get case studies on Wakandan/Atlantean relations.

-A+X #9 (Nathan Edmonson, Humberto Ramos, David Lapham)
A team-up book where Captain America and Wolverine fight giant snakes, giant ants, and culminates in them  smacking a chimp that has acquired a magical staff. The 2nd story involves 3 young mutants sneaking into Dr. Strange's Sanctum Santorum. If there wasn't  the $3.99 price tag every issue of A+X would be required reading.

-Avengers #14 (Jonathan Hickman, Nick Spencer, Stefano Caselli)
To those that have claimed Hickman's Avengers haven't been very heroic, may I present you with Avengers #14. Weird gardener/machine code/world builder stuff  is still present too.  The focus is on how the Avengers are actually worldwide superheroes.  I hope this trend continues as there aren't enough superheroics in superhero comics these days. 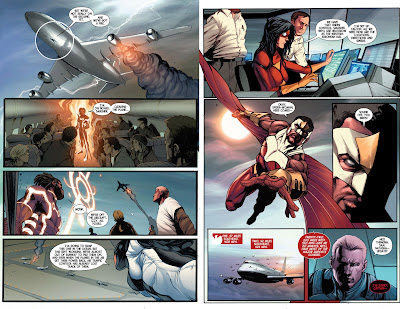 -Age of Ultron #10 (Brian Michael Bendis and a buttload of artists)
So... I'm done with Bendis scripted events. Done. No more.  Hard to believe I've stuck with them this long. This issue wasn't particularly bad. Age of Ultron as a whole was bad and pointless. These ten issues couldv'e been condensed easily into a one-shot special.  I don't just want to be another one of those guys, but Bendis proves every criticism about him ever concieved, from adding pages with ridiculous decompression to giving every character the same voice to ignoring other writers' additions to characters. Brevity restrains me from a warranted rant, that and the ranting has been done by others elsewhere. If you come across a positive review for Age of Ultron please ask the reviewer how much they were compensated.

-Superman Unchained #1 (Scott Snyder, Jim Lee)
The best new Superman release of the past couple months. Not really a bar that requires the ability to leap buildings in a single bound to clear, but hey, I'll take it. The steep $5 price is due to a bizarre pull-out that isn't quite a poster since there are still story relevant words being spoken on it. You can't put a price on heroism though, and that's what you get in this comic: Superman being super heroic.

-Threshold #6 (Keith Giffen, Phil Winslade, Tom Raney, Timothy Green II)
A Green Lantern fights a Braniac.  Said Green Lantern also shows that the ring can make things besides just giant fists, to the astonishment of Hal Jordan.  As much as I enjoyed the primary story, the back-up tale about a space private detective who's partner is gynoid with his dead ex-wife's personality/memories is my favorite part of the issue.

-Animal Man #21 (Jeff Lemire, Steve Pugh, Francis Portela)
Twitter: The Comic, as there are at least 6 pages that have a twitter feed on them.  If not for the lack of Buddy's family being a cohesive unit and the inclusion of a twitter proxy this would almost seem like one of the early issues of Grant Morrison's vaunted run on Animal Man. Turns out it's not, for a number of reasons, but a lot of the tone is there.

-The Manhattan Projects #12 (Jonathan Hickman, Nick Pitarra, Jordie Bellaire)
The story is great blah blah blah. The pencils are excellent yada yada yada. The colors are superb weep woop. Look, the only mark against this comic right now are a handful of grammatical errors. Errors that I cannot overlook anymore thanks to Jake. 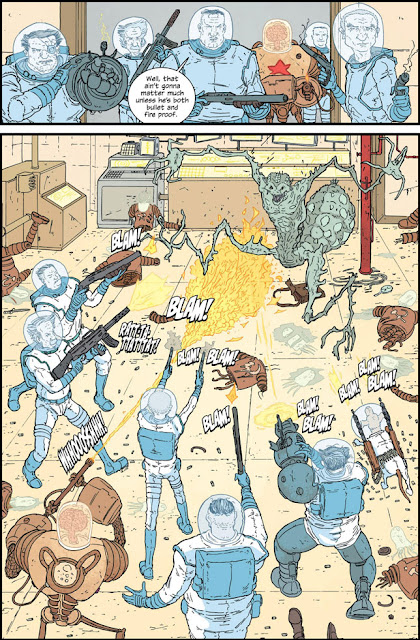 -G.I. Joe #5 (Fred Van Lente, Steve Kurth)
Baroness explains why people are willing to join Cobra. A small town explodes. The Joes then put out the ensuing fire by exploding the fire away. Don't lie, you know you want to read this comic.
by Unknown at 12:33 PM