-Captain America #8 (Rick Remender, John Romita Jr.)
Captain America fights his way through Arnim Zola's interdimensional spaceship fortress castle to save the Earth and his son only for a shocking last second twist.  Though can twists really be shocking when you call them before you even open the comic?  That said, I am interested to see where Remender is going with this reveal.  There's an exchange mid-battle where the bad guy gives voice to some detractors of Captain America who have never read a comic of his.  I liked it, because it recognized some of the complaints while also framing them in the context that people who think like that are also brainwashed psycho-Nazi clones.  The art and story complement each other so well it's uncanny as the bizarre plot elements are given a form so fitting that they make perfect sense. 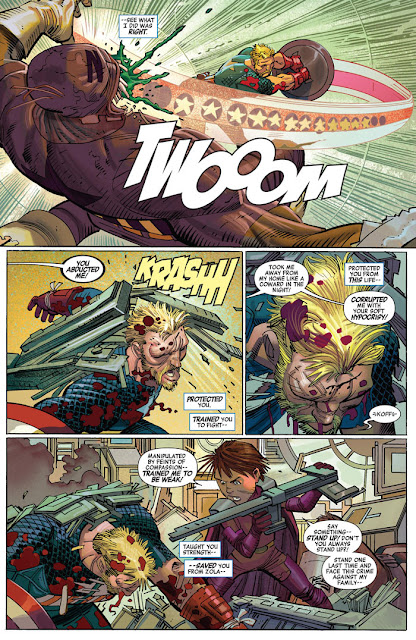 -Avengers Arena #11 (Dennis Hopeless, Riccardo Burchielli)
Some acceptable character work is done this issue.  It's just a shame that the set-up for it is completely asinine.  Thus rendering the entire exercise pointless.  This series isn't irredeemable yet, but each issue brings it that much closer to the event horizon.

-Nova #5 (Jeph Loeb, Ed McGuinness)
An OK comic book, which is pretty high praise for a recent Jeph Loeb comic.  The plot is weak, but the script lets the art go all out.  It's hard to fault Loeb too much since there are few things I wouldn't do to get an Ed McGuinness-drawn fight scene involving a cyborg tiger with a gun arm.

-Deadpool #12 (Brian Posehn, Gerry Duggan, Mike Hawthorne)
I think it's safe to say that Deadpool is once again one of my favorite comics without fear of incurring the wrath and scorn of other comic book readers.  The battle with the middleman from hell making a power play ended in a suitable fashion and allowed for all manner of jokes regarding the Marvel universe.  It really seems like a comic for fans by fans. 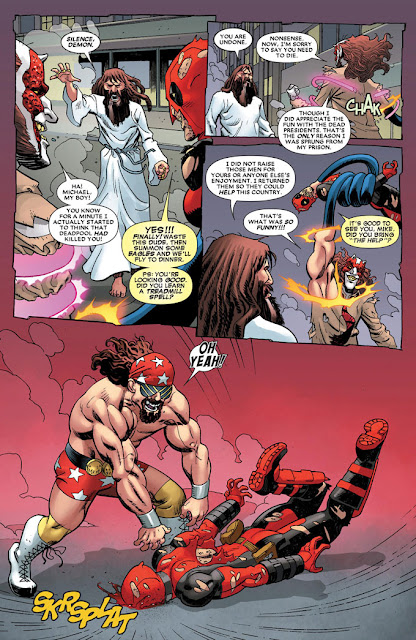 -Daredevil #27 (Mark Waid, Chris Samnee)
Hot damn that is one way to wrap up a huge story arc.  In case you didn't know, Daredevil is good right now, like really really good.  For fear of spoilers, since I know that Jake is way behind on this series, I won't say much more.  Perhaps it's premature to say that issues 1-27 are going to go down as some of the best comics ever, and boy do I feel sorry for whoever has to follow this story up.  Oh wait, Mark Waid (and Chris Samnee?) is(are) sticking around to tell even more stories.

-Wolverine and the X-Men #32 (Jason Aaron, Nick Bradshaw)
The X-Men continue to beat the hell out of all the Hellfire Club stuff they can find, but they still can't find the things they really want to kick the ass of.  This issue moves pieces around and places players in anticipation for the big conflict that looks to begin next issue.  Beast delivers a line that I shall try to remember for eternity: "...I haven't spent my life dismantling the machinery of prejudice only to be outmaneuvered by the world's most overprivileged twelve-year-olds."  Surely the only resolution that awaits is Beast slapping a group of super evil children.

-Guardians of the Galaxy #4 (Brain Michael Bendis, Sara Pichelli)
The issue in which the characters seem the least out of character, yet has the most Bendisy set-up to date.  Only instead of sitting around eating Chinese food, the Guardians are chillin' at a bar.  It's a shame that they're not hanging out in Knowhere at Starlin's, however they still get to relax and eventually get into a bar fight.  That is something that is almost always entertaining.  Really my only gripe is jobbing out Gamora to some bounty hunter, but I suspect more will be revealed about the mysterious assailant that will explain why he is so formidable.  If I hadn't read the previous issues where Rocket Raccoon was spouting off about how he was going to "murder" people then I'd be very hopeful for the future of this book.  I have though, so I'm still deeply concerned.

-Age of Ultron #10AI (Mark Waid, Andre Lima Araújo)
Age of Ultron has an epilogue issue?  Eww.  It's about Hank Pym and written by Mark Waid?  I guess I have to read it now.  It's a good thing too, because this is a good comic.  Sure it's more or less one long internal monologue, but it's a glimpse into the mind of perhaps the most misunderstood Avenger of all time.  There's a message of hope in here too that makes it more than just a good Hank Pym comic.  If Waid wrote an ongoing about Ant Man/Giant Man/Goliath/Yellowjacket/Wasp I'd be all over that.  To be fair, there isn't much Mark Waid could write about that I wouldn't be excited for.

-Aquaman #21 (Geoff Johns, Paul Pelletier)
Like a lighthouse on the shore, Aquaman is a beacon guiding the rest of the New 52. Aquaman is a damn fine comic and more DC series should strive to match it.  Intrigue abounds as the narrative deftly weaves in and out of various plot threads.  Aquaman himself is on more pages this month than last, and his presence dominates every panel he's in.  It cannot be overstated how amazing the underwater sequences look, which is really important when the bulk of your story takes place in a sunken city. 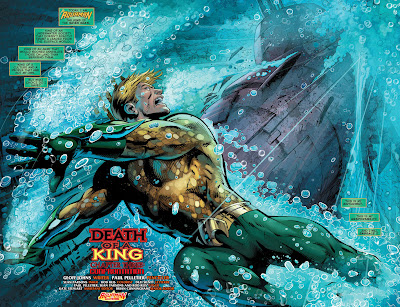 -All Star Western #21 (Justin Gray, Jimmy Palmiotti, Moritat, Staz Johnson)
A bounty hunter from the 19th century is brought into the Gotham City of the present against his will.  Though the time period might be unfamiliar, Jonah Hex's hate for the city remains.  What could possibly go wrong when frontier justice is brought to modern society?  The art seemed to subtly shift with the time period; maybe it's all in my head and I'm crazy, or maybe it's a brilliant move on Moritat's part.  The 1800's Stormwatch back-up story is a parable about why a diet high in garlic will save your life.  It's the simplest way to poison/explode vampires. 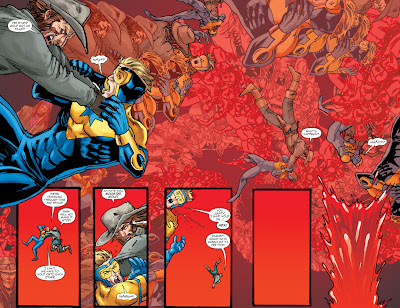 -Justice League #21 (Geoff Johns, Gary Frank)
The Captain Marvel, excuse me, the Shazam story that's been running in the back of Justice League gets a full issue to wrap up this month.  I don't think the Shazam story has been as bad as some people have said, and I'd even argue that despite it being pretty ridiculous at times, it concludes with some decent character development.  Things like plot are really a moot point, though, when Frank is providing the world with some great reaction faces on par with Kevin Maguire.

-Prophet #36 (Brandon Graham, Simon Roy, Giannis Milonogiannis, Matt Sheenan, Malachi Ward)
Ineloquence coupled with a sheer speechlessness-inducing issue (and Prophet as a whole) robs you of a detailed account of thoughts (if they can even form after getting mindbent at every page). Prophet is a beast that takes full advantage of the medium, which is why it's the best book on the stands. 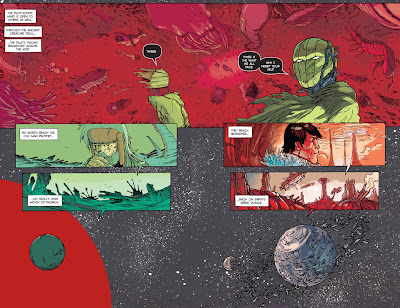 -Mobile Suit Gundam: The Origin volume 2 (Yoshikazu Yasuhiko)
My only complaints about this beautifully bound hardcover is the cover art and some wonky/stilted translation.  If you want a manga with full-colored Char shower scenes and Mirai, Fraw, and Sayla sexy time on the beach then you might want to order your copy today.  Don't worry if those names mean nothing to you, because The Origin is incredibly accessible all while maintaining hardcore appeal.  It's as much for new fans who have no idea that a mobile suit is an 18m tall humanoid war machine as it is for people that have seen everything from 0079 to AGE.
On a more serious note, this is an incredible war comic.  To say the story is good is an understatement, and to call the art merely good is an insult.  The stunning visuals compliment a riveting tale of survival as a ragtag crew struggle to make it through enemy territory alive.  There's a strong human element that runs through the comic too, a common trend of the Gundam franchise.  It works to ground the conflict and to give a face to the enemy.  One side might appear more just in their cause, but at the end of the day both factions are made up of people.  The fact that the creator of this comic is one of the most important people in the creation and production of the original cartoon breathes a life into the book elevating it above a simple retelling of a 30+ year old narrative. 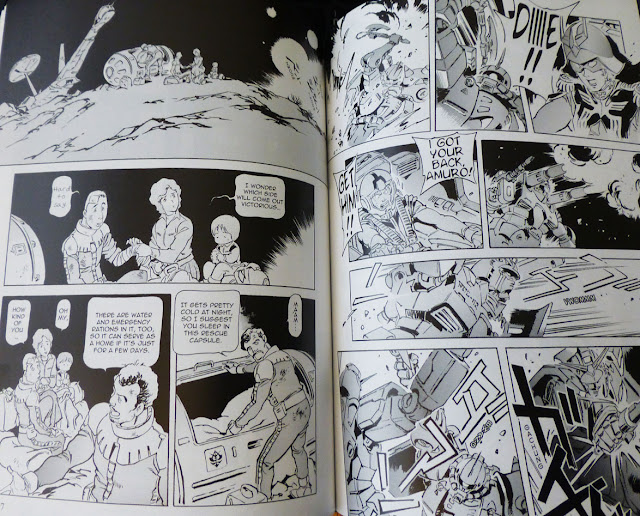