"PICK UP THAT CAN!" Storytelling in Half-Life 2 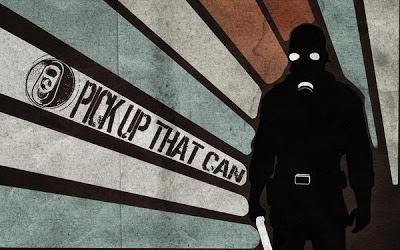 The divorce between storytelling and gameplay has plagued video games since birth. Gameplay seems to get the games during the week, and maybe storytelling gets to see them on weekends. While never perfect, this upbringing seemed serviceable through games’ Reagan-era infancy. But games are finally reaching a twenty-first-century adolescence, and they’re developing an identity of their own. And now they ask for not just gameplay, or storytelling! They ask for both! They’ll have their cake and eat it too! They want to bring the parents back together into holy matrimony! But like any awkward teenager, this transformation is rife with missteps. There’s a hope, though, that one day games will inherit the best traits of both storytelling and gameplay to become something greater. Something that no other medium for art can create. Something that matters. 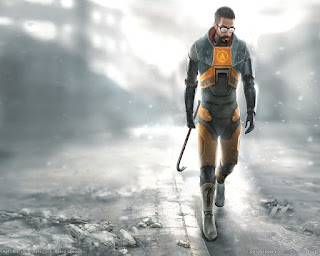 Valve’s Half-Life 2 is the final product of this drawn-out metaphor. I know it's been played to death in game academia circles, but there's a reason for that. It exorcises all of gaming’s storytelling vs. gameplay demons, and creates an art experience that could not be accomplished in any other medium—and isn’t that what all games should strive to do? Its storytelling and gameplay are married beautifully, without sacrifice on either end of the spectrum. First-person shooters have been done before, but none of them perfects this balance the way Half-Life 2 does. Valve’s storytelling immerses the player in the gameplay, and the gameplay immerses the player in the story. How does Half-Life 2 do it?
Raph Koster writes in his book A Theory of Fun for Game Design that all games, no matter how little storytelling is involved, require some sort of surrounding fiction. From chess to BioShock, “designers put artwork on [game systems] that is suggestive of some real-world context.” Even in chess, the gameplay is infinitely deep, yet it’s all underneath a fiction of medieval warfare, with queens, pawns, and knights. Early video games featured superficial fictions like this as well, whether it was staving off space invaders or a plumber saving a princess. But at the end of the day, people didn’t play Donkey Kong to get insight into a fat Italian man’s hopes and fears. They played Donkey Kong because the gameplay was fun. 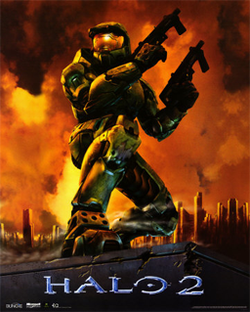 Conventional wisdom would lead players to compare Half-Life 2 to Bungie’s Halo 2. Wait… another title that starts with “H,” is three syllables, and ends in “2”? Halo 2 and Half-Life 2 are more similar than you might think. Both games are science fiction FPSes released within a week of each other in November 2004. Both titles are sequels to highly successful predecessors, and are the second chapters of trilogies. Both games feature male protagonists in powered armor suits who must defend humanity against hostile alien invasions. But like a Grand Theft Auto hooker’s blow job, these are all superficial.
Halo 2 begins with a cutscene. An epic space opera with throbbing string accompaniment, reminiscent of the first Star Wars film, its first level is entitled “The Heretic.” A spaceship flies through a star fleet to what we see is labeled as “Covenant Holy City, High Charity.” Cut to what looks like an alien court, with an old alien on a throne asking a young alien to recount his story of battle with the humans. This young alien, who we later discover is called the Arbiter, immediately begins spouting exposition. As he does, the cutscene cuts to a cutscene within the cutscene, a flashback cutscene that is essentially the Halo 2 plotline setup.
And that’s the whole level. There’s no gameplay. It’s all a cutscene. Halo 2’s first gameplay is in its second level.
This level is called “The Armory.” Aboard what we’re told through a subtitle is called “Earth Defense Platform,” an anonymous human soldier complains about expensive weaponry being fried. Our protagonist, a behemoth of a man in a green armor suit, puts on his helmet and says in a deep, action hero, smoker-for-40-years voice, “Tell that to the Covenant.” A golden one-liner among action hero one-liners. Then we finally get to play the game. The anonymous soldier tells the player how to look around, how Halo 2’s damage system works, and the general controls of the game. Then one of the other major characters of the game, Sergeant Johnson, fetches you to go somewhere with him (you’re never told where). You get on an elevator with Johnson, and the level ends, segueing into the next level… which starts with a cutscene. 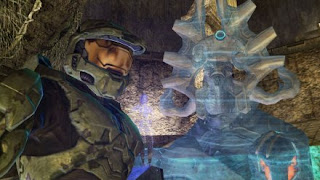 The entirety of the storyline over these first two levels is presented in non-playable cutscenes. Once the player actually takes control of the game, all we’re left with to actually “play” is a glorified tutorial. Bungie’s epic game features a complete divorce of storyline and gameplay, and as a result both storyline and gameplay suffer.
The protagonist is Master Chief. An alpha-male, ass-kicking dude. This archetype has been prominent throughout video game history, from Duke Nukem’s eponymous hero to Microsoft’s other big action series, Gears of War’s Marcus Fenix. They’re a game development crutch. They’re the product of designers creating this cliché Koster-style façade for the storyline: character and story created as an excuse for the gameplay. The developers wanted to create an FPS with a powerful player character, and had to shoehorn a story into it. Thus, a storyline featuring an ass-kicking, flawless protagonist is formed. Bungie relied on lazy storytelling like its Master Chief character to allow them to create the shooter they wanted to create.
The player character in Half-Life 2 is Gordon Freeman. He wears an armor suit like Master Chief, but instead of a manly man, he’s a nerdy guy with thick glasses (a subtle commentary on the people playing HL2?) Freeman is a silent protagonist. Like the alpha-male protagonist, the silent protagonist has also been present throughout video game history, from Mario to Link to Samus Aran. This would seem like weak storytelling as well, but it allows the player to feel more immersed. As L.B. Jeffries writes in “Half-Life 2: Giant Ants, Head Crabs and Barnacle Creatures,” the fact that Freeman never talks “makes it so that identity is still highly malleable in the player’s mind… the game is not just giving the player a role to assume, they’re giving you space to make your own tweaks to the identity by having it be a broad one.” Instead of being spoon-fed what the protagonist thinks of the situations the player is in, you’re left to form your own conclusions about the characters and story around you. The fact that the name Gordon Freeman is so generic is no coincidence. Gordon Freeman is really only a proxy for the person playing Half-Life 2. Is it a game design crutch? Perhaps. But it works. 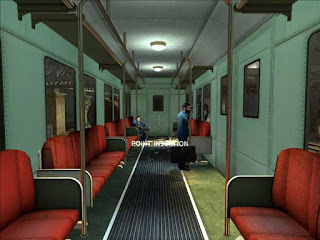 Half-Life 2 begins in medias res. Being a first-person shooter, the player only ever sees what the protagonist sees. You’ve been placed in an anonymous, unexceptional train car. No one tells you what to do. No text appears on the screen to tell you what to do. There’s no music, no direction, nothing; apart from short monologues at the very beginning and end of the game, there are no cutscenes. You’re just placed into the gameworld, and must figure everything out for yourself.
There are two other men in the train car with you, and they’re in prison-style jumpsuits. One of them says in an almost disinterested tone, “Didn’t see you get on.” Eventually, the train arrives at a station, and you can get off. You are in an Eastern European-style train station, and a giant TV screen with a man’s face appears, welcoming you to “City 17.”
Without narration or plot summary, the player walks through the train station. Police officers with gas masks and voice filters guide prisoners through the station—reminiscent of a concentration camp. Your character has no weapons, so you can only play along and see the world like another prisoner would. A woman asks you if you’ve seen her husband (you haven’t). A man tells you not to drink the water (it’s drugged). You see some people being beaten by the police, but unlike a regular FPS where you can blast these bad cops to kingdom come, you can only watch or walk away. The story unfolds around you in realtime. From overhearing the people around you, you deduce there’s been an alien invasion of Earth, and humans are all slaves. But unlike Halo 2, there’s no epic cutscene to depict this. No flashback. Everything is presented as the protagonist sees it. The story is told through the gameplay. 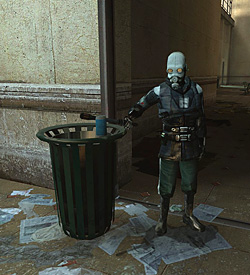 Mark Sivak expands on this in “Half-Life 2: Being Gordon Freeman:” he says the player is controlled using puzzles that limit the pace the player can progress through the game, and force them to think about the world around them. “The puzzles require teaching of skills and mechanics so that the player can complete them without becoming frustrated or just guessing.”
This is exemplified in the first section of the game. Eventually, a cop stops you. He’s standing next to a garbage can with a soda can sitting precariously on its rim. The cop deliberately knocks the soda can to the ground with his baton, and orders “PICK UP THAT CAN.” If you do, he lets you go. If you don’t, he beats you. This accomplishes two things at once. It establishes story: you’re living in an oppressive society and must do what this cop says for fear of death. Second, on a more basic level it teaches you the basic mechanics of picking objects up and throwing them in the game. Unlike Halo 2, which features a huge cutscene and then a “level” that’s not much more than a tutorial to teach you the game’s controls, HL2 teaches you basic gameplay mechanics through the story. This “pick up that can” moment is the crux of Valve’s technique. The storytelling is human storytelling.
Fraser McMillan argues in his piece “On Half-Life 2 – Build It and They Will Come” that the way Valve accomplishes this gameplay-through-storytelling-through-gameplay is that “Half-Life 2 is designed so as to not appear designed.” Although the game is very linear, the player feels like it’s not. There are no arrows pointing you in the right direction, and instead the player’s observations of the gameworld encourage them to go where Valve wants them to go. Most of what we do, see, or hear in HL2 feels distinctly of our own volition. McMillan writes, “If not in the act itself, the mere observation of incidental detail off the critical path is a component of the illusion of presence and agency, even though each individual’s journey will, in the end, be effectively identical to other players’.”
Valve is like Ben Linus in Lost, leading us to think we’re making our own decisions when really, we’re doing exactly what they want us to do. It’s incredibly meta, in that the dystopian-future plot of HL2 is about this very concept. It’s through this that Valve creates a beautiful work of art, with storyline and gameplay intertwined completely to create something greater—honeymooning lovers conceiving their first child.
by Unknown at 10:31 AM