If you haven't seen the rollicking Norwegian monster flick Trollhunter (Trolljegeren), do yourself a favor. It was released last year in Norway, although it didn't hit U.S. theaters until this past month--if you're in the D.C. area, the E Street Cinema is still showing it until the end of the week!

André Øvredal's Trollhunter is about exactly what it sounds like it's about--a guy who hunts trolls. The handheld camera and giant monsters immediately bring Cloverfield to mind, but it's a vastly superior film. It's got the action and scares, but it's also got a lot of humor, and uses Norway's extensive troll folklore to make the titular creatures more compelling.

While watching the movie, all I could think of was "this would make a fantastic video game." I know, movie tie-ins rarely work out, but in my theoretical game world, it would be perfect! Warning: minor spoilers ahead, but hear me out:

You play as Hans, the Norwegian government's official Trollhunter. It's a Ghostbusters-meets-Men in Black sort of job; you've got to get rid of trolls that travel outside their territory, while at the same time covering it all up and making sure the public doesn't learn of their existence.


Since trolls only come out at night, the game is split into night and day. During the night, you hunt trolls; during the day, you cover up your tracks and stock up for the next night of trollhunting. The nighttime gameplay would be similar to that of a first-person shooter, but instead of a traditional gun, Hans carries a sort of "light gun." Trolls' biggest weakness is sunlight, so Hans must expose them to UV rays with the light gun, similar to a big camera flash bulb. 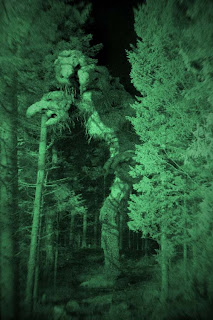 As we learn in the film, there are several different varieties of trolls, so there are different ways to approach each breed. This will help diversify the light gun mechanic, and provides a natural video game progression courtesy of the film's story. The movie's characters go from encountering a small (tree-sized) troll to facing a 300-foot behemoth, which sets itself up almost too perfectly as the final boss of the game.

During the day, Hans hides it all, and moves on to the next one. This is like a detective game in reverse, making sure the general populace is unaware of what happens at night. While some trolls explode when exposed to sunlight, older ones simply turn to stone. Hans breaks down the stones and turns them to gravel. Any damage incurred by trolls (half-eaten farm animals, destroyed power lines) gets covered up as bear attacks or freak tornadoes. Hans then prepares for the next night, by setting up traps and re-stocking supplies.

Hans' Land Rover is another critical part of the film and the gameplay. It's where he stores all his trollhunting gear and navigates the sweeping locales of Western Norway to get to the next one. Finding trolls is an art of its own--finding cryptic newspaper articles, examining the landscape for hints of troll activity. The Land Rover is a big part of that. But it's also used in battles against the trolls themselves; he upgrades it and outfits it with protective spikes and a giant troll-fighting UV searchlight.

One last element of the film to incorporate into the game is one of trolls' stranger abilities: being able to "smell the blood of a Christian man." One of the characters in the film is indeed a Christian; while everyone else sneaks around at night mostly unnoticed by the trolls, the Christian character must constantly cover himself in "troll stench" to prevent them from easily sniffing him out. This could translate to nifty stealth mechanics in the game, although it would be a fine line to tread. Poorly-executed stealth sections can ruin a game.

There you have it. Why Trollhunter would make a superb video game, and a bit of a promotion of the film itself in the process. Go see it.
by Unknown at 7:44 PM