Video games do horror better than any other medium can.

Frictional Games' Amnesia: A Machine for Pigs was recently made available for preorder before the game releases September 10. It's a sequel to the critically-acclaimed 2010 indie smash hit Amnesia: The Dark Descent. I'm torn. 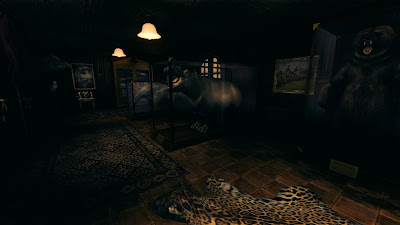 I want to want this game. It's co-developed by the Chinese Room, the studio responsible for my beloved Dear Esther. And the original Amnesia revitalized survival-horror in gaming. After mainstream horror mainstays like Resident Evil and Silent Hill decided they would be more action-oriented in an attempt to appeal to the widest possible audience, Amnesia embraced horror's status as a niche genre.

Amnesia didn't succeed with a triple-A budget or massive marketing campaign. It succeeded by being fucking terrifying. Word-of-mouth goes a long way in the internet age, where YouTube videos of people being fucking terrified while playing Amnesia were the best marketing any horror game could hope for:


A YouTube search for "amnesia" pulls up dozens of videos like this one, with hundreds of thousands of views.

So what did I think of The Dark Descent?

Does that mean I hated the game?

Nope. In fact, it was some of the most atmospheric, immersive gameplay I've ever experienced. I couldn't make it any farther than 46 minutes because I was too fucking terrified.

I'm not a huge horror enthusiast, but I appreciate good horror. I can easily get through the most terrifying horror movies. I even got through [REC]. But my terror threshold for games seems to be much, much lower. And it's not just Amnesia. There are all sorts of horror games I can't get through, like Fatal Frame or Manhunt or most recently, the freeware Slender:


I'm not saying horror games are better than horror movies. I'm just saying horror games are more fucking terrifying than horror movies. When I watch a movie, even if I'm scared I can keep going, because I don't have to do anything; I just sit there and watch. I know something terrifying is lurking in the basement and the protagonist shouldn't go down there, but I can just sit there and passively watch them do it. With games, you yourself have to physically move down into the basement, even when you know there's something fucking terrifying down there.

Even when I played something as mildly scary as Gone Home, I was slightly freaked out because I was expecting something to pop out at me at any moment. I would've pooped my pants. Horror takes advantage of the medium's interactive nature more than perhaps any other genre of game. It's much easier to immerse yourself in a game and forget the barrier between audience and protagonist than it is with film or literature or any other medium.

It makes me excited for the future of video games. But it also makes me not so sure I'll get my full twenty bucks' worth out of Amnesia: A Machine for Pigs, despite the fact that I know it'll probably be an artistic masterpiece.
by Unknown at 5:43 PM