-Iron Man #12 (Kieron Gillen, Dale Eaglesham)
Just when I thought I was out, they pull me back in.  This "secret origin" stuff is a mess in Iron Man and legitimately a very infurriating addition to the characters back story.  That said, Howard Stark going all XCOM is something I've enjoyed in the past and will enjoy in the future.  An alien also makes reference to the Fresh Prince when he spots a fake(?) UFO.  The crux of my pulled-back-inness hinges on the closing reveal.  Tony stark is going to pilot a 25,000 foot giant robot named Godkiller.  I don't think I need to explain why that has piqued my interest.  Stupid retcons can't ruin this.  There is one man who could, though, so please Dale Eaglesham draw the next couple of issues. 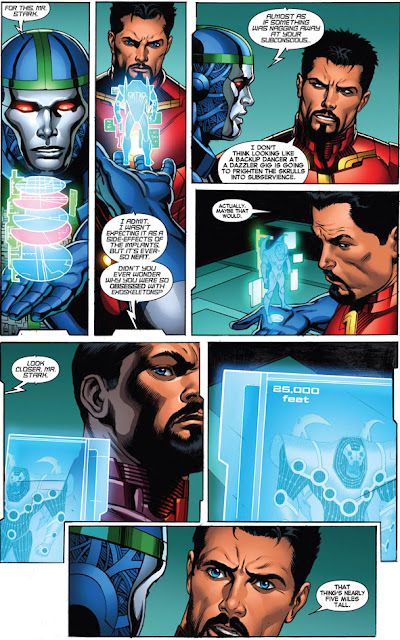 -Avengers A.I. #1 (Sam Humphries, André Lima Araújo)
Hank Pym is cool, and if you don't agree may I direct you to a comic from last week that might change your mind.  Naturally I'm going to buy a comic book where he leads a team of robotic heroes in an attempt to usher in a new age of human-cyborg relations while averting the rise of a hostile artificial intelligence.  The debut issue is well paced and has some nice characterization going on for it so far.  The art is crisp and has a quality about it that is perfect for the mechanical subject matter.  The colors help make it pop too.  Magnificent sound effects warrant a special mention for Clayton Cowles' lettering. 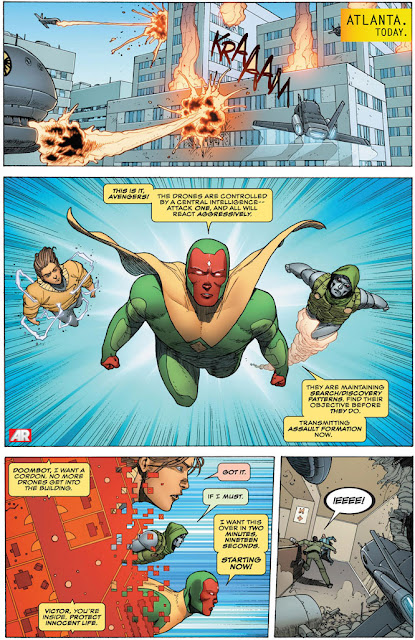 -Avengers #15 (Jonathan Hickman, Nick Spencer, Stefano Caselli)
In case the last issue of Avengers wasn't vague enough for your tastes, Hickman and Spencer are right back to obfuscating things.  That's okay, since Caselli gets to draw the Avengers fighting a bunch of giant bugs and the obligatory triumphant group pose.  There's definitely a splash page of concentric circles.  I don't care if it's supposed to be two separate pages or not, there are rippling concentric circles on consecutive pages.  That's got to be one of the most Hickman things ever.

-Stormwatch #22 (Jim Starling, Yvel Guichet)
For the past three months I have struggled to understand what is going on in Stormwatch.  Little has changed except that this journey has taken a turn (not an unexpected one mind you) into madness.  The previous 3 issues have merely looked longingly towards that path, and as if compelled by the voice of "a monster of vaguely anthropoid outline, but with an octopus-like head whose face was a mass of feelers, a scaly,rubbery-looking body, prodigious claws on hind and fore feet, and long, narrow wings behind" Starlin has taken the comic straight off the rails.  Make of that what you will.

-Action Comics #22 (Scott Lobdell, Tyler Kirkham, Frank Hannah, Tom Derenick)
Action Comics remains caught in a talespin of worsening comics since Grant Morrison's departure after issue #18.  The Superman and Clark Kent presented on these pages isn't the least heroic Superman of the summer, but beating out Man of Steel is not worth bragging about.  Surely this isn't the kind of stuff that Lobdell has been bringing to the plain Superman comic, because if it is, yeesh, that is not something I'd spend money on.  I have to assume that the mediocre art turned in by Kirkham is a symptom of the bizarre creative shift and poor story.  There's some stupid Kryptonian backstory in the back-up too.
by Unknown at 11:08 AM