Welcome to the Giant Robot Week edition of the pull list.  There are two bonus entries in this edition of my weekly chronicle of the picture books I spend my money (hard-earned or ill-gotten) on.  Spoiler alert, like my previous posts on the subject hint at, giant robots are awesome.

-Superior Spider-Man #13 (Dan Slott, Christos Gage, Giuseppe Camuncoli)
I don't want to give the impression that I'm not enjoying the current story of Superior Spider-Man, but I really wish there was a different Spider-Man storyline going on now.  In case you were unaware, the current Spider-Man is not heroic.  There's no other way to spin it.  If you want to have that debate then I welcome it, however the evidence is on my side.  That said, it's still an interesting comic book that I am happy to buy.

-Avengers Arena #12 (Dennis Hopeless, Kev Walker)
Yo, the writing in this comic is some straight garbage, like for real.  I only got to the first caption box on the 2nd page before I had to close the comic in disgust.  It's not the graphic murder of children that has got me down.  Instead it is the insinuation, however tenuous, that the reader is the bad guy for "watching (reading) to see what horrible thing might happen next."  Look, I didn't start reading this comic for the shock value.  I picked it up because characters I liked were in a comic book.  That they are being brutally killed is off-putting, so I'm concerned for their fictional wellbeing as well as the wellbeing as them as characters that continue to be published.  If Marvel wants to feed some actually interesting new characters that aren't established white males to some hack writer, that's their prerogative.  I just won't be around to give them my money for it anymore.  Poor Kev Walker, art of this caliber deserves writing that can match it.

-Daredevil #28 (Mark Waid, Javier Rodriguez)
Fortunately Mark Waid is still wrtiting Daredevil.  Unfortunately Chris Samnee didn't draw this issue.  Fortunately Javier Rodriguez makes some damn fine art.  From issue #1 Daredevil has been a comic that could get by on its art alone.  It hasn't had to do that though thanks to Waid's brilliant storytelling.  A new story arc begins this issue and it deals heavily with Daredevil's not-so-secret identity as Matt Murdock, lawyer extraordinaire.  For a comic with a lot of heart and human characters, look no further. 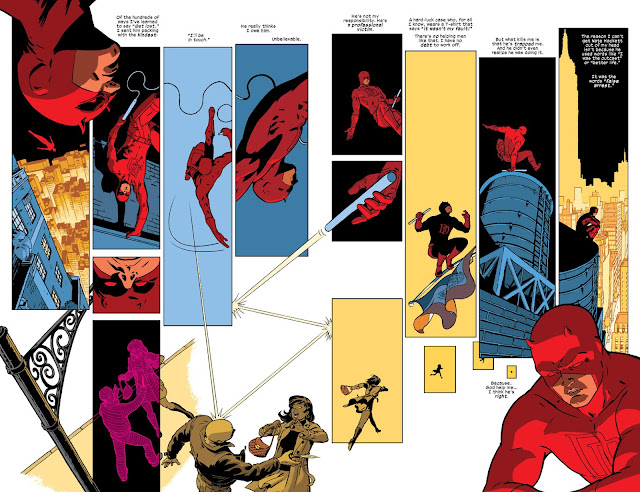 -Justice League #22 (Geoff Johns, Ivan Reis)
So begins DC's summer hero vs. hero event.  Like all events of this nature, everyone is a dick that punches first and asks questions never.  Since when did Superman decide to go full "For the Man Who Has Everything" at the slightest provocation?  I never asked for this, and really I'd prefer just to read Secret Wars again instead.  I can't wait to ask the hard-hitting questions at Comic Con this year, like "What the hell?" and "Who thought this was a good idea?"  I'd happily accept more Captain Marvel silly faces as an apology.

-Threshold #7 (Keith Giffen, Phil Winslade, Tom Raney, Timothy Green II)
Who'd have thought that a reluctant hero would be the most heroic character of the week so far?  Maybe it's the inevitable cancellation of the comic that has brought a sense of urgency and clarity, but whatever it is, comic has a renewed sense of purpose as it barrels forward into impending oblivion.  The art this issue is somewhat hit or miss, however it is "hit" in the places it really needs to be "hit" in.  The space private eye back-up from last month continues in this issue.  I said it before, and I'll say it again: Star Hawkins needs an ongoing series.

-Superman Unchained #2 (Scott Snyder, Jim Lee, Dustin Nguyen)
Issue 2 of Superman Unchained just reaffirms my belief that it's the best Superman-related thing out right now. The book opens with Superman trying to save everyone in the Burj Khalifa while a giant construction robot wreaks havoc.  This opening segment shows Superman at his best. By best I mean an incredibly powerful man that gives it his all to protect everyone.  Superman begins a search for some powerful mysterious person that brings him into conflict with the army.  A fight ensues, naturally, but there is something very important about how the fight begins.  Superman doesn't throw the first punch, and in fact tries to resolve the conflict without violence.  Snyder writes Lois Lane with a bite and sharp wit that has been a hallmark of the character. 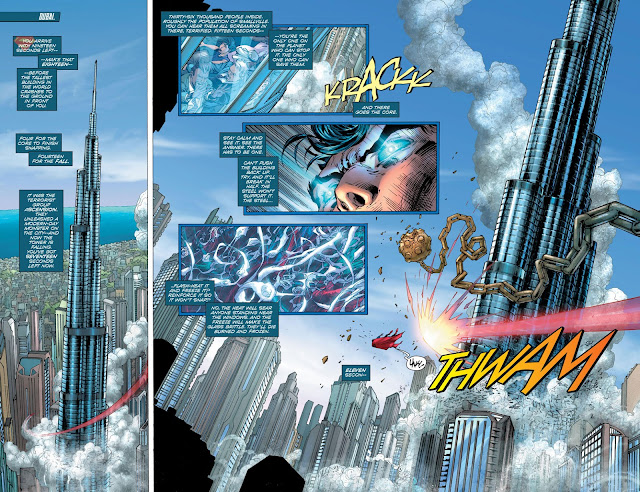 -East of West #4 (Jonathan Hickman, Nick Dragotta, Frank Martin)
If you can find them, go buy the first four issues of East of West.  If you can't, just pre-order the first collected edition.  This is a comic about the horseman of death storming Mao's stronghold. The pages ooze with visceral depictions of Death and his companions wading through Mao's horde.  Don't worry, it's not just one big fight comic. There's also some powerful character interactions; the closing monolgue in particular is expertly laid out.  Along with The Manhattan Projects, Jonathan Hickman is writing two great comics at Image right now. 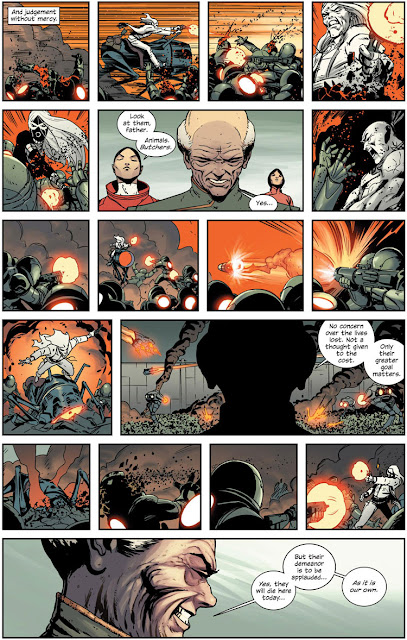 -Mazinger Z (Go Nagai)
The first giant robot piloted via cockpit makes its debut in Go Nagai's now classic Mazinger Z from 1972.  Kouji Kabuto, the protagonist, finds himself in control of a giant robot and proceeds to protect the world from the nefarious, aptly named Dr. Hell and his giant mechanical beasts.  It's not the deepest manga ever, but it did give the world the titular robot Mazinger Z.  That isn't just innovation.  That is invention.  Truth be told the manga hasn't aged too well, however it doesn't take long to read through the exploits of Mazinger Z rocket punching two headed mechanical beasts in the face over 5 volumes.  Give it a read and feel cultured. 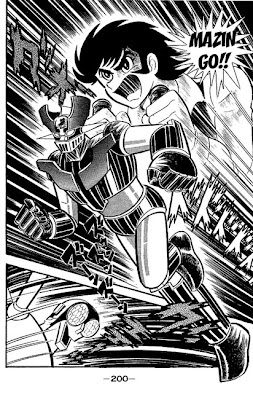 -Getter Robo (Ken Ishikawa)
Go Nagai gave the world a piloted robot.  Ken Ishikawa gave the world a robot made of three combining jets piloted by 3 people in 1974.  It's as awesome as it sounds.  Getter Robo is an exhilerating ride pitting the titular robot against a rising Dinosaur Empire.  It's a comic about 3 dudes using a giant robot to fight dinosaur people.  Don't you want to read that? It is a well written and dynamically drawn story that is as good today as it was the day it first saw print.  This first part of the Getter saga is only 5 volumes.  It does lead on to 4 sequels that are equally worth a read, especially Getter Robo Go.  Overall it's an amazing overarching story that only has one sad flaw: Ken Ishikawa died before he could complete the story ;_;  So you should probably read it unless you enjoy disrespecting the deceased.  The fine folks over at Dynamic Pro Scanlations have both Getter Robo and Mazinger Z translated into English for your enjoyment. 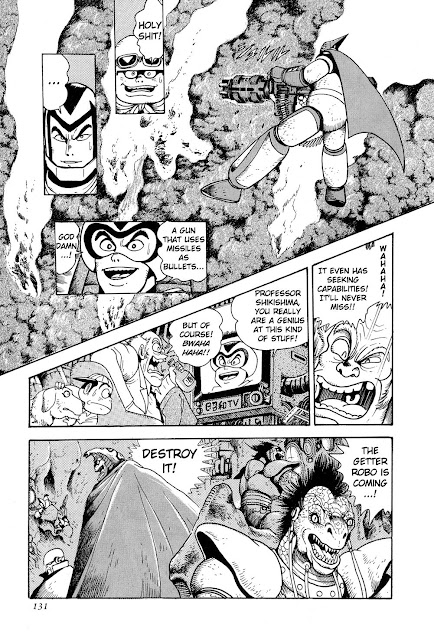