The most riveting online video game experience of my life

I've become fairly skilled at EA Sports' NHL series as of late. I don't play it for hours at a time, but I play a couple quick games online every day to blow off steam after work.

I'm not a big fan of online multiplayer gaming in general. I even write for a website called Only Single Player. NHL is my exception. I almost don't see it on the same level I see all the "arty" games I play. The other games are there to give me some sort of intellectual fulfillment. NHL is there to fulfill my carnal gaming instincts. I used to play it against the computer, but eventually real human opponents are the only way to truly challenge your skills at a competitive game. 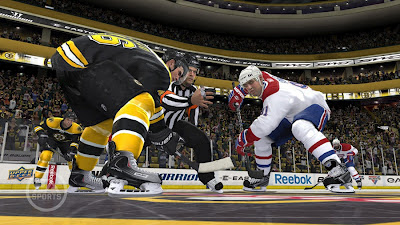 NHL 12 is not a perfect game. Players are assholes online, so they still try to get in fights with you and take shots on goal during every single stoppage in play. And when they get desperate, players online ALWAYS go for the cheap, glitchy wraparound goals. Even after all EA's tweaking, wraparounds are still the best way to take advantage of faults in the goalie's AI.

But on a twitch-impulse gameplay level, NHL 12 is immaculate. The developers have perfected the game's controls--players have total control over every aspect of their virtual pros' skates and sticks.
I've been on a roll lately, winning five games online in a row. They're ranked matches, so if you play well, you get matched up against other players who are of a higher skill level.

Tonight, I played a level 31 match--the highest I've ever played. I was feeling a bit cynical after winning so much, so I decided instead of playing as an NHL club, I'd play as a minor league team. I chose the Hershey Bears, the farm club of my hometown Washington Capitals.


Usually, it's NHL 12 online etiquette that if one player chooses a minor league or European team, the other player does the same so they're on a level playing field. But nope, my opponent tonight stuck with the NHL's St. Louis Blues. "Uh oh," I thought to myself. "This is the highest ranked match I've ever played online, and I'm playing as a minor league club against one of the best teams in the world." And then the game began.

Of course, the Blues scored right away to take an early lead. But amazingly, after endless forechecking and offensive pressure, I got one back! It continued this way through the duration of the game, my opponent and I trading goals--although I never had the lead. It was always St. Louis going ahead, and my team coming back to tie it up.

When my opponent was leading 4-3 in the third period and one of my players took a two-minute penalty, I thought the game was over. But alas, not only did I kill the penalty... I scored a shorthanded goal! Game tied, 4-4!

At this point, my hands were aching. Along with NHL 12's perfect controls come the attrition of constant attention to detail in playing. You can't passively play NHL 12. So not only was I in this heated online matchup, but I was facing the possibility of real-life injury to win the game. NHL features cutscenes during stoppages in play that people normally skip through to get to the real gameplay, but this late in the game I took every breather I could to rest my shaky hands for a few precious seconds.

And with the third period almost over, my star player Joel Rechlicz--perennial minor league enforcer, mediocre goal-scorer--scored his third goal of the night to complete a hat trick and win the game for my Hershey Bears. I nearly cried tears of joy. 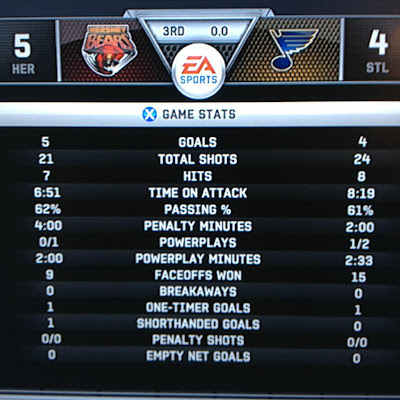 This whole experience took about twenty minutes, but it felt like three hours. When the match finally ended and I emerged victorious, I rejoiced like I never have with a video game before.
While many game critics write off sports games as simple diversions, I felt legitimate emotional connection to my experience in NHL 12 tonight.
by Unknown at 12:23 AM