Scott Pilgrim vs. the World is the best film I've seen all year. 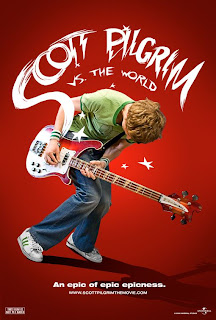 I didn't have high expectations going into the theater to see Scott Pilgrim vs. the World. It got mixed reviews from critics, and cinemas are billing it as a kids' movie. But as it turns out, Scott Pilgrim is the best film I've seen all year. Edgar Wright, Canadian indie rock, and endless video game references add up to a film right up my alley, even if it may not be middle-aged Washington Post critics' cup of tea. After all, you can't create decent art without alienating someone.
Mr. Wright, of course, is the director of two of my favorite films of all time: Shaun of the Dead and Hot Fuzz. His signature geeky attention to detail and super-fast cuts are present in Scott Pilgrim; you can tell he had a lot of fun making this movie. Michael Cera plays the titular character, the bassist in a mediocre Toronto garage band called Sex Bob-omb (a great Mario reference already). He falls in love with a girl who makes him fight her seven evil exes to date her. These are pretty much Scott Pilgrim's equivalent of bosses at the end of each level in a game. The film is full of colorful action sequences which are stuffed with video game homages, complete with bad guys evaporating into coins when they're defeated. Considering the movie is tongue-in-cheek, the fight scenes are surprisingly well-choreographed. Even though Pilgrim is a mopey little hipster, his uber-fast punches and roundhouse kicks to the moon reach martial arts film-caliber quality. This trailer doesn't do the movie justice, but it gives you a good idea of the combat sequences. 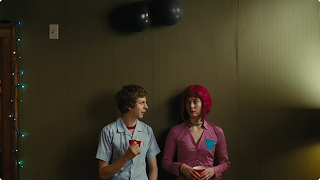 Other than the Mortal Kombat-style graphics accompanying the fight scenes are a few more subtle video game references. One of Scott's friends plays The Legend of Zelda on his Nintendo DS throughout the movie, and you can hear the game music in the background of a few scenes. In one of Scott's dream sequences, the Zelda song in the background morphs into a fantastic orchestral composition.
As I said before, music is at the center of Scott Pilgrim. In addition to a soundtrack full of Canadian indie stalwarts like Broken Social Scene and Metric, music plays an important role in the story. Scott's band, Sex Bob-omb, must play a Battle of the Bands organized by a mysterious record producer named G-Man (a Half-Life reference?), so many of the fictional musicians in the movie actually play music the audience gets to hear. Some critics of the film complained that considering music plays such an integral role, they wish there were more "hummable" tunes to walk out of the theater with. But that misses the point entirely of indie rock written in the basement of a twenty-something in Toronto.
When I tweeted "Scott Pilgrim is the best film I've seen all year," I immediately got many responses of "OMG WHY NOT INCEPTION???" I suggest those people read my review of that film. Inception was a great concept with not-so-great execution. Its Achilles' heel was that it tried make everyone love it. Scott Pilgrim vs. the World, on the other hand, doesn't want to please everyone. If you don't play video games, don't listen to indie music, and/or are over 40 years old, you probably won't like this movie. And that's the way art should be.
by Unknown at 1:28 PM