Sci-fi closer to reality than you think: District 9 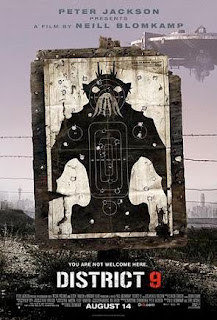 When District 9 came out a year ago, it was lauded for its biting social commentary, an allegory for South African apartheid. It was a big step forward in the maturation of the science fiction genre, using extraterrestrials not as campy bad guys but as sympathetic, layered characters. The story--aliens stranded on Earth who are forced to live in slums in Johannesburg--could have taken place in any number of major cities in first-world countries, from New York to London to Tokyo, and turned into an Independence Day-style action movie. But the fact that it takes place in South Africa adds a whole new dimension not seen very often in cinema.

First-time director Neill Blomkamp based the film off a 6-minute short film he made called Alive in Joburg. The pseudo-documentary style, which was later used in District 9, features a number of interviews with South Africans about their feelings towards the aliens. In Alive in Joburg, most of these interviews aren't fake; they're actual interviews with real South Africans about their feelings toward Zimbabwean refugees in the country.

This realism carries over to District 9, where the slum the "prawns" are forced to live in wasn't created for the film. It was a real recently-evacuated neighborhood of impoverished housing, and like the prawns, the real-life residents of these shacks had been evicted to move to government-subsidised living areas.
The prawns are about as horrific as you can get. They've got little arms coming out of their stomach, they lay eggs that nurse on animal corpses, and they've got repulsive tentacles for mouths. But they've got redeeming qualities beneath it all. Despite their disgusting appearance, the prawns have very human-looking eyes, they've got a few quirks like their intense love of canned cat food. By the end of the film, it's these ugly aliens the audience identifies with, and the humans who turn out to be the oppressors. Even the main human character's name is Wikus van de Merwe, while the main alien character is... Christopher Johnson. 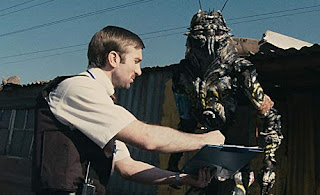 What really sticks with me is the performance of Sharlto Copley as this human main character, Wikus. At the beginning of District 9, he's a huge dick. A weaselly Afrikaner paper pusher working for a shady multinational military contractor, he's assigned to lead the relocation of the prawns from Johannesburg to a giant internment camp outside the city. He looks down on the prawns, laughs about killing their babies, and in general represents greater society's negative view of the (literal and figurative) aliens. He's the worst kind of person.

Over the course of the film, though, we as the audience empathize with him. But it's not because he ceases to be a douche. He doesn't. Even when he sticks it to the Man and helps the aliens, it's only because he wants them to help him in return. But it's those shades of gray in which we find his humanity. What District 9 accomplishes beautifully, other than the sweet Afrikaner accents, is this idea of finding the good in the bad.

Sharlto Copley had never done any professional acting prior to District 9; this solidifies my view that famous actors are a farce. No matter how brilliant Brad Pitt is, you can always find an unknown who will do just as well for a fraction of the cost, which you can then spend on things like "improving the film." But our society needs these stars to feature on movie posters, to get people into theaters to make money for the industry. District 9, however, succeeds without a single famous actor. Sharlto Copley makes me wonder what modern cinema would be like if we didn't need Brad Pitt.
by Unknown at 1:41 PM