Philadelphia: Enjoying a city despite its sports fans 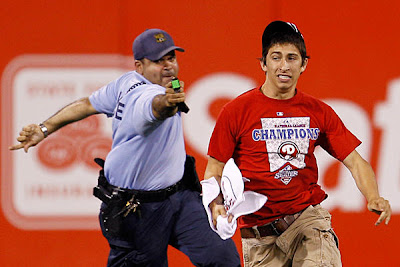 Living with a Philadelphian roommate for two years, I was prepared to be hit over the head with the City of Brotherly Love when I visited this weekend. An entire wardrobe's worth of Phillies t-shirts, a constant fawning over cheesesteaks, and a hockey team known more for brutish thuggery than graceful finesse. But I always assumed much of this hometown patriotism was because my roomie was living away from home, and distance makes the heart grow fonder. That's not the case. After spending time exploring Philly, its people are perhaps the most patriotic of any city I've ever been to. 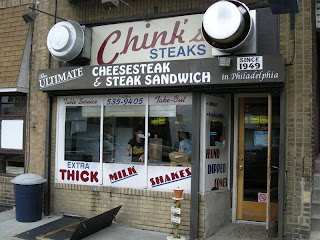 I would spend this time talking about the historic neighborhoods and nice museums in Philly, but this isn't a travel blog. So let's get down to the nitty-gritty, things that really matter (and by that I mean things that don't matter at all).
Perhaps it's only because I spent most of my time in hip Center City, but there are people in Phillies t-shirts everywhere you look. Immediately upon entering the metropolis, you're drowned in its sports fans. I know D.C. isn't exactly wild about the Nationals, but even walking around New York, you don't see nearly this many people wearing Yankees apparel. There's even a store called Cheesesteaktees which is solely devoted to selling Philly-related clothing. Center City seems to be full of both hipsters and bros, and they balance each other out. Maybe the prevalence of bros explains why Philadelphians are so big on tasering. And with Philly's proximity to New Jersey, the city is also full of a certain cultural subset slightly related to more extreme bros. 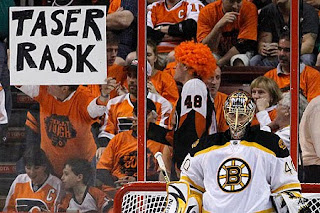 I know the question you're all begging me to answer: what about the flags? It's nowhere near the quality of the Baltimore flag, but Philly's is decent, and the city displays it prominently. They also fly the Pennsylvania state flag everywhere, and that one's not quite up to snuff. The "coat of arms on a blank background" is only one step up from the abysmal "seal on a blank background" so many states fly. And the black horses + dark brown eagle on the dark blue field are a flag faux pas--everyone knows you shouldn't have black and dark brown on dark blue!
But the fact Pennsylvania features their unremarkable flag everywhere got me thinking. Obviously, the three flags I spend the most time under are DC, Maryland, and Virginia. The first two are magnificent flags, while Virginia's is completely devoid of any character whatsoever. Coincidentally, D.C. and Maryland fly their flag everywhere, while I almost never see buildings in Virginia display their state flag. I always thought this was just because Virginia knows it has a horrible flag. But Pennsylvania's isn't much better, and they fly theirs far more prominently. What does this mean? Is Virginia just an anti-flag state?
by Unknown at 11:10 AM