Oh my God, you guys, American Vampire, oh my God.
Ahem... so, American Vampire is a Vertigo comic series written by Scott Snyder and dawn by Rafael Albuquerque that was originally published in March 2010 and until recently had been on a hiatus.  To that end, I had originally intended to do a review of American Vampire: Second Cycle #1 but it quickly became apparent that I had way too much to discuss before I even got to talking about the newest issue. So while I intend to do a monthly analytical critique of each issue, I’ve decided to use this space as a primer to give some background on the series and explain why it’s so great.  Because it really is so great.

American Vampire tells the interconnected stories of Skinner Sweet and Pearl Jones, an outlaw from the American West and an actress from 1920s Hollywood, respectively.  The characters are the first and second members of the newly minted species of American vampire. See, vampires in AV are…different, to say the least. Like any other species on the plant, they are prone to bouts of genetic drift and mutation.  As such, while European vampires, otherwise known as the Carpathians are the most traditional version of the monster, there are dozens of different variants on the formula.  The American breed for example is completely immune to sunlight, a trait unique even in the realm of the franchise though some species have apparently developed incredibly thick epidermises that make the sun more or less a moot point.  Furthermore, instead of having a lethally allergic reaction to wood (to justify the ‘stake through the heart’ part of the mythos), American vampires react poorly to gold and are at their most vulnerable on moonless nights.

But that’s only the top layer of American Vampire.  As you go deeper, it becomes apparent that AV is one of the most literary comics on store shelves these days.  The primary theme of the series is reflections, which isn’t a new thing when it comes to vampire literature.  Vampires have more or less always been reflections of their times.  Dracula, without a doubt the most famous undead bloodsucker, has largely been read as a metaphor of the sexual politics of the Victorian Era. Heck, the scene that got the original book banned from a ton of high schools is one wherein a woman receives a blood transfusion from multiple men.  This was read by some people as a threesome.  Yeah.  American Vampire though, takes it one further.  Vampires, and the character of Skinner Sweet in particular, are a monstrous reflection of American culture.

Skinner’s tale begins near the tail end of the American West, with him as a notorious outlaw.  His capture by the heroic Pinkerton Jim Book establishes the theme early on.  On one hand we have the heroic marshal, and on the other a villainous outlaw who are foils to each other in many ways.  Both fall under the “cowboy” archetype, but they’re opposite sides of the same coin.  Later on, we have The Blacklist, a story arc that takes place in the late 1950s. This arc sees Pearl and Skinner hunting down the remnants of the same vampire coven that caused them no small amount of trouble in the 1920’s.  The vampires have become a lot more scared of the pair in the last thirty years, and a lot craftier.  To that end, they’ve started hiding in the homes of non-vampire associates throughout Los Angeles.  The story sees our heroes going house-to-house interrogating Hollywood bigwigs and seeing if they have anything to hide.  The entire arc draws a parallel with the Red Scare, and in particular the hunt for communists in the entertainment industry.  The series is full of references like this and it’s a large part of what makes the story so engaging. 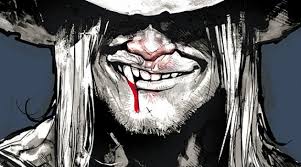 But this is a comic book and a series can only survive on its intellect for so long in this medium.  And rest assured, this series is awesome; full stop.  It features among other things: Nazi vampire supremacists versus a “sun gun,” a ragtag organization of vampires who are all the last of their kinds, the happiest Renfield in literature, and greasers who are really good at killing vampires.  And then there’s Skinner Sweet.  Not since the Joker has there been a character who is so…gleefully evil. And make no mistake, Skinner isn’t evil because of his vampirism, he is a despicable sociopath to the core and he is having an absolute blast doing it.  See when we watch a character like the Joker having fun doing something evil, our immediate reaction is: “man that guy is messed up.”  But when you see Skinner massacring a Buffalo Bill-style traveling western show on a whim you can’t help but think: “hah, that’s hilarious.”  It’s dark and depraved, but Snyder deserves major props for making the character so damned likeable even when he’s just as likely to throw a wrench in the plans of the heroes as he is to screw with the villains of any given story.  And Skinner isn’t alone.  Characters like Felicia Book, Cash McCogan, Henry Preston, and Calvin Poole help make the world of American Vampire feel so fully realized.

No mention of a comic is complete without a critique of the artwork. Rafael Albuquerque’s style is full of jagged lines and smoothed corners, a statement that sounds contradictory.  Of particular note are his characters, who are always immensely expressive even when they turn into monstrous abominations.  He gives every species of vampire little flourishes ranging from the jagged-toothed smiles of the Carpathians to the rattlesnake-like Americans.  Colorist Dave McCraig also gives it his all, infusing life into sun-drenched West Coast vistas and deserts while emphasizing the dread that comes naturally from such locales as a cramped cargo ship in the Black Sea or a gothic estate in the German Alps.

American Vampire is just damned cool.  On March 19, Snyder and company released Second Cycle #1, a continuation of the first 34-issue run.  Second Cycle #1 is a decent place to start if you want to jump right in, but if you’re unsure of where or how to begin, I suggest American Vampire: Long Road to Hell.  It’s a 64-page standalone that provides a perfect taste of the world and is an excellent short story in its own right.  If you want a more complete look into the mythology of the universe then I recommend the five-issue miniseries Survival of the Fittest, which is quite honestly my favorite arc in the franchise.  It’s the one about killing Nazi vampires.  Apart from those bits, I highly recommend you start at the beginning.  Not only is Rough Cut one of the better arcs, the backup story, Bad Blood, tells the origin story of Skinner Sweet and is written by none other than Stephen King.

American Vampire is a series that deserves to be discussed in the same breath as some of the greats.  It’s by far the best horror comic I’ve ever read and it’s probably the best thing DC is putting out these days.  But whenever I bring it up with my comic-reading friends, I only ever get blank stares or shrugs.  Hopefully this primer has convinced you to go out and read it for yourself and has given you a good idea of where to start if you do.  Next time we’ll get back to that whole analytical critique thing I promised earlier.  Until then!