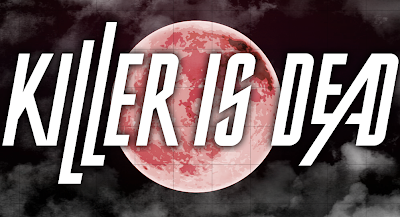 I've written on this blog before about how much I love Goichi Suda's Killer7. At this point in my life, it may be my favorite game of all time. The avant-garde approach to game design by his studio Grasshopper Manufacture is unmatched.

But as I've also written about on this blog, Suda's games have gone downhill since Killer7 in 2005. He seems to have realized his games have quirky appeal, so he's been banking more and more on the "silly" aspect of his work, without the bleak qualities of Killer7 that make it so evocative. 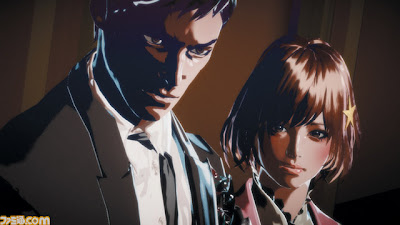 Grasshopper's first game following Killer7, No More Heroes, was more on the humorous side but still a brilliant game. But Suda's two major productions since then, Shadows of the Damned and Lollipop Chainsaw, are humorous to the point of losing the deeper meaning seen in Suda's older work.

So the announcement of Killer Is Dead is a welcome return to Suda's roots. Billed not as a sequel but a spiritual successor to Killer7, the first real details on Killer Is Dead have emerged over the past few weeks. Its official website is online, and the first official trailer has been released:

It sports the cel-shaded serious look of Killer7 mixed with a healthy dose of the swordplay hack-and-slash of No More Heroes. This is great, although I hope it isn't too button-mashy.

Perhaps my favorite aspect of Killer7 was simply interacting with its bizarre cast of characters and exploring the gameworld. From the first part of the trailer, I was worried it would be an action-adventure game with all "action" and no "adventure".

But the second part of the trailer beginning at the 1:50 mark of the video--the epilogue?--gives me hope. It's an introduction to the game's protagonist, the immaculately-named Mondo Zappa. This reminds me of Killer7 protagonist Garcian Smith, and lovable No More Heroes main character Travis Touchdown. Zappa hints at the next video featuring "a beautiful woman who has devilish hands," and we get to see indeed, a woman with at least ten hands. I CAN'T WAIT FOR MORE! 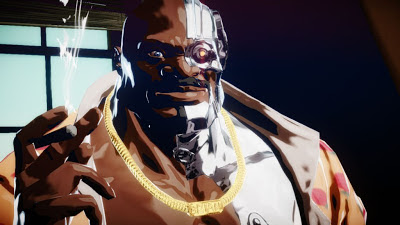 The prevalence of moon imagery throughout the website and the trailer harkens back to Killer7, and of course, Mondo Zappa is probably a reference to musician Frank Zappa's daughter Moon Zappa. Suda has said in interviews that the game exists in a near-future where lunar tourism is prevalent, but insists that Killer Is Dead isn't a science fiction game. Coming from Grasshopper Manufacture, this could mean anything.

A final note: can Masafumi Takada do the soundtrack, please? He was the man behind the music of Killer7 and No More Heroes, but hasn't worked with Suda since then. Maybe he's the secret behind Grasshopper's greatest works.
by Unknown at 11:19 AM