What modern sports games tell us about competition in the market

There's been hubbub lately about Sony's upcoming baseball simulator MLB 13: The Show being, for the first time, the only baseball video game on the market. Sports video games, once a genre full of games made by competing companies in each sport, are nearly now down to a single game per sport. Want some NFL? Better play Madden. Want hockey? Better play NHL 13. Many people worry that this lack of competition in the annual sports game market will lead to studios getting lazy and publishing the same product year after year, since consumers have no other choice if they want to enjoy their preferred sport in virtual form.

Let's take a closer look at the last ten years of critical reception to sports video games. Any farther back and the market gets veritably flooded with other competing sports game franchises, many of which lasted only a year or two; the last decade has seen a relatively consistent market. I normally don't look at aggregate review scores to judge the quality of games, but annual sports games are a unique genre--objective improvement is slightly more conceivable here than in other types of games. All my statistics in this article are taken from the review aggregator site GameRankings.com.

We want to believe competition breeds innovation, right? Nobody likes monopolies. It's simple economics. The posterchild for this is the biggest sports game franchise in the United States, EA Sports' colossal Madden NFL series. While the series has gone downhill since 2004 when EA bought the exclusive rights to NFL video games, this may be the exception, not the rule, when it comes to the results of competition (or lack thereof) in sports games: 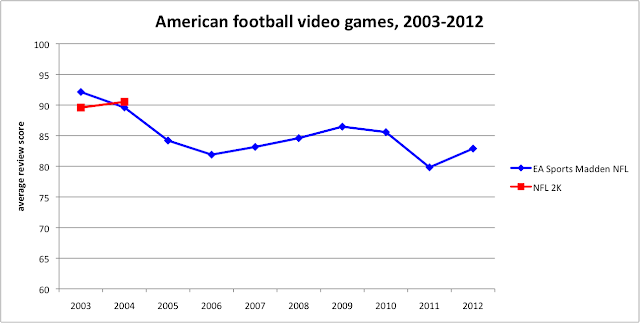 We talk about competition in football videogames like it was yesterday, but Madden has had nearly a decade on its own now. It's been a bumpy road that's never quite reached the glory days of a bygone gaming era. Much of players' anger directed at EA stems from the fact that rival 2K Sports ended its football career on a high note--the final game in the series, ESPN NFL 2K5, is considered by many fans to be the pinnacle of virtual gridiron.

2K Sports' pigskin franchise was a life cut tragically short by EA's multimillion dollar deal. So what did 2K do? They fired back, of course, by buying the exclusive rights to the next-biggest American sports league: Major League Baseball. But unlike EA's NFL deal, 2K didn't take into account that they only got exclusive third-party rights to MLB. The major console manufacturers are still allowed to internally develop their own pro baseball games, and that's exactly what Sony has done. Let's take a look: 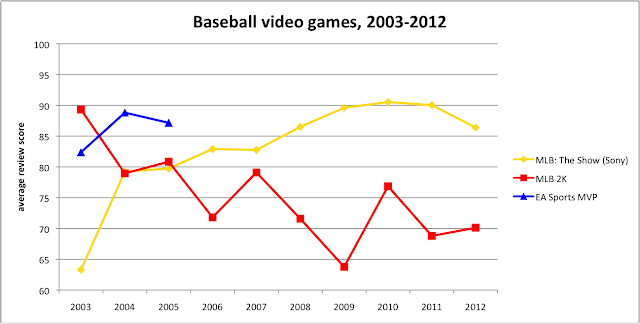 2K managed to knock out EA's industry-leading MVP Baseball. But their MLB 2K series became lethargic, and Sony took advantage with its MLB: The Show franchise. Despite only being released on Sony's PlayStation consoles, The Show has effectively manhandled MLB 2K. The butt-whooping has been so extreme that when Sony releases its new game this March, 2K won't even publish a competitor. For the foreseeable future, you won't be able to play baseball in videogame form unless you own a Sony PlayStation. Despite 2K's exclusive license, it now seems Sony will have the monopoly on baseball in 2013. 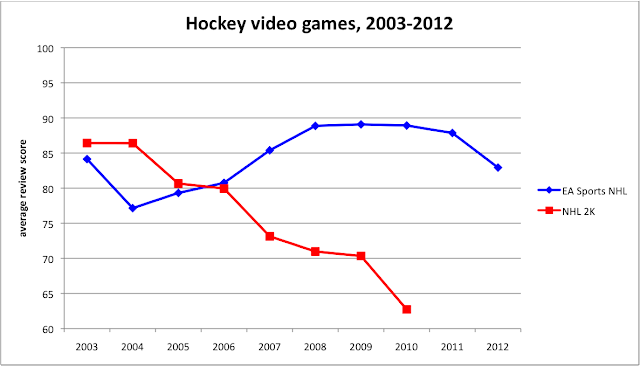 It seems every time a new console generation is introduced, the tables are turned when it comes to competing sports games. In each of these charts, major changes occur between 2005 and 2006--the years that the Xbox 360, PlayStation 3, and Wii were launched. Hockey games are the classic example of this. While EA had the upper hand in the Super Nintendo/Sega Genesis era with classics like NHL '94, 2K Sports took the advantage in the PlayStation/Nintendo 64 era with their NHL 2K series. Then, as we've seen since 2005-2006, EA steadily outpaced its competition once again, to the point where 2K stopped publishing hockey games last year. This isn't because of some devious scheme by EA, but simply because 2K delivered a vastly inferior product. In the years since the decline of NHL 2K, EA's series has remained steadfast in its quality.

Between baseball and hockey, we would be led to believe 2K Sports simply can't create great sports video games in the modern era. But when it comes to virtual basketball, they've always known how to get it done. 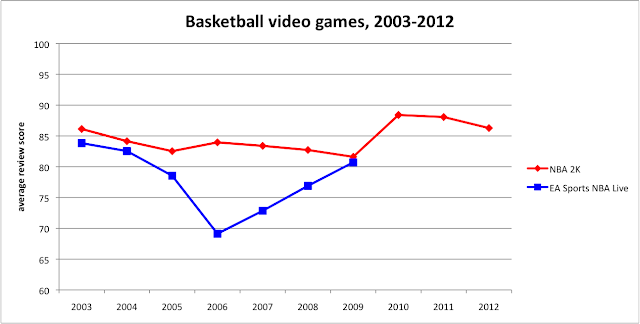 Not only is this the only sport without a single change of advantage in the last decade, but the demise of EA's big-budget NBA Live made its already-dominant rival NBA 2K skyrocket in quality. This chart looks like a Newton's cradle, where the rising momentum of the struggling EA franchise in its dying years seems to carry over to 2K's series as NBA Live dies. EA has tried to reboot its basketball sim numerous times, but it's failed to deliver a product for the last three years. It'll be interesting to see if they can create something in the future.

The only sport that still has continuous competition in annual sports games is soccer. Strangely, instead of a battle between EA and 2K or one of the first-party companies, it involves EA and... Japanese publishing giant Konami. 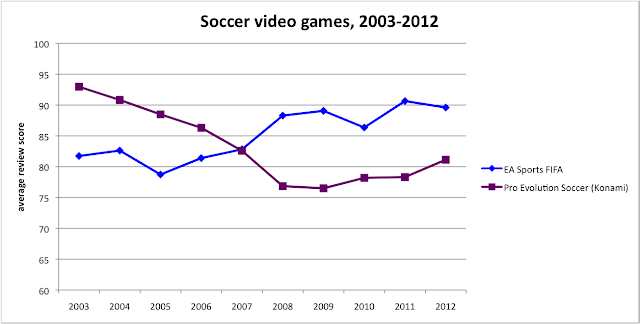 Soccer is an interesting sport when it comes to videogame licenses, because there's not just one top league to acquire the rights to--there are dozens of top soccer leagues in the world, and many of them negotiate rights on a club-by-club basis. And then there are national teams to license, too. Today, EA's FIFA series has the advantage due to a much larger budget and the licenses for many more leagues than Konami's Pro Evolution Soccer. But Pro Evo has been making a comeback in recent years, and it'll be interesting to see what this market looks like a few years from now.

Of course, I'm only taking into account simulation-style games of the top professional leagues of each of these five team sports. American football and basketball also feature games based on college teams. And more notably, there are also the arcade-style sports games like NFL Blitz and NBA Street. Many games like this pop up when a publisher's sim-style franchise is floundering; 2K published its arcade baseball game The Bigs in the dying years of its MLB 2K series because they couldn't seem to figure out how to get simulation baseball right, and EA pushed its arcade NBA Street: Homecourt when its simulation NBA Live series was falling apart.

Exclusive licenses aren't the reason competition in annual sports games is coming to an end. Really, that's just Madden. For every sport, there's a unique story behind the narrowing of its playing field. But the common thread seems to be that superior products simply triumph over inferior franchises. Ten years ago, it was much easier for inferior series to stay alive, but with the increasing production costs of AAA videogames, many smaller publishers can't afford to.

Many of today's sports games are better than ever, even without competition from other franchises. In the age of $60 videogames, sports game franchises are competing against themselves. Non-fans of sports games often point out the fact that you're essentially buying the same game every year for a roster update and a couple tweaks. But this very paradigm can force developers to improve themselves. Unlike an MMO, where you're forced to pay $15 per month if you want to continue playing at all, sports games warrant a $60 purchase once a year--and if you don't want to upgrade to this year's game, you don't have to. Unlike in MMOs, you can keep playing last year's sports game forever if you want. Developers need to give players a reason to update, and that's a good thing.
by Unknown at 12:49 PM