The Megami Tensei series is one of the longest-running JRPG franchises in the history of video games, yet until very recently it was almost unknown among Western audiences.  As a JRPG hipster I've played most of the modern games, but unlike a JRPG hipster I want as many people as possible to play them.  To encourage this, I'll do a retrospective of recent games in the MegaTen franchise, in reverse chronological order. 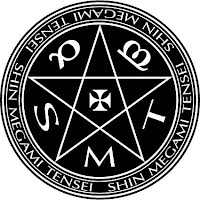 
To begin with, I thought it prudent to mention properties that almost all games in the series have in common.  There are exceptions, and I'll mention them when it's relevant.  MegaTen is a truly massive franchise, with multiple side stories that have become franchises themselves.  Despite this, they are all descended from dungeon crawlers, being some of the unconditional titles in that genre.  To begin with, the games are time sinks, typically taking between 60-80 hours to complete the basic story.  Very difficult turn-based combat is the mechanic of choice, and the MegaTen franchise was one of the first to have a mechanic popularized by Pokémon: the ability to convince enemies to join your party and fight for you.  In addition, you can also fuse these demons (it's usually demons, but even when it's not the fusion mechanic is still there).  Fusion is vital, as you can't recruit all enemies and the skills you've grafted to your new demon may not be learned normally.  The stories of MegaTen games are also significantly darker than the stereotype of the happy-go-lucky JRPGS, often featuring apocalyptic or post-apocalyptic settings.  With all that said, let's get to the games!

Persona 4: The Popular, Mainstream One

This is the one most people have heard of, if they've heard of it at all.  Persona 4 is incredibly popular in America and Japan, with huge merchandising, and animated adaptation, a updated re-release for the PS Vita (Persona 4: The Golden), and a spin-off fighting game bridging the stories of Persona 3 and Persona 4 (Person 4: Arena).  The story focusing on the unnamed main character moving to a small country town in Japan, where a strange fog rolls in to town followed by a serial killer.  The protagonist teams up with his high school friends to solve the mystery, which (due to the protagonist's ridiculous power to climb inside a television) leads them to the Midnight Channel, to fight the dark side of man's collective unconscious.  The story is very character focused, each level being generated by the dark side of whatever particular character is trapped in the Midnight Channel.  This brings a lot of character development to the game, while the murder mystery overplot is well paced and gives you a constant goal to focus on.

LGBT?  In my video games?


With all the focus on character development, there are some that stand out from the rest.  Kanji may be one of the more sensitively handled depictions of homo/bisexuality (it's debatable) in modern video games, without ever being preachy or stereotypical.  While it may not be the best presentation of these issues, the fact that he has a character outside his sexuality (a really good one, at that) really surprised me, which is in retrospect kind of depressing.  Also, though I won't spoil which character it is, there is a character that really struggles with their gender/sexual identity, something you almost never see in modern video games.  In fact, even among the straight characters, the deep dark secrets they hold are very often linked to their sexual identity.  The constant theme is dealing with your problems and choosing an identity, which makes the game more worthy of a "mature" rating than any number of bloody shooters.  The Persona side-series is actually rather infamous for homosexual characters, as Persona 2 even let you have a same sex relationship, in 1999.  This is probably the reason why even in 2012(!!) its rereleases haven't been ported to the US.  Hopefully this will change in the future.

TV Crawling (no seriously, you climb into TVs) 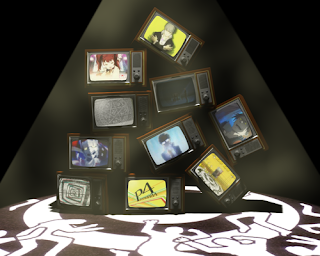 About half of the game is exploring the Midnight Channel, fighting the "shadows" that embody the evil in humanity.  The dungeon crawling is classic MegaTen, but very streamlined.  Buffs and debuffs are practically required by the difficult combat, but can only be applied once, instead of the typical 3-4 times.  This removed a lot of the "set up" turns which eat up time in older games.  The dungeons are separated by a central hub area, and you can heal in this central hub after a certain plot point, making it easier to continue exploring.  The difficulty curve, though, is very strange.  The first two bosses are actually the most difficult, and the difficulty drops off for the rest of the game.  Note that this is relative to other MegaTen games, so it's still probably more difficult than other JRPGs on the market, but for longtime series fans, it was very strange.  Some characters are also just flat-out better than other characters in combat, so you'll probably end up running with the same characters.  The biggest improvement is the ability to control your party members. One of the biggest problems with the difficulty in Persona 3 was that you couldn't control your party; you could only give them different AI instructions.  However, if the protagonist falls, it's game over, regardless of how many party members are alive. The first time you game over because the party healer refuses to heal the protagonist, it's funny. The twelfth time, not so much. The persona capture-and-fusion system is as fun as ever, and most are pretty balanced so you can run dungeons with just about any party.


The real-world aspects--going to school, hanging out with friends, buying items--are more like a visual novel, and is the other half of Persona 4.  Outside of cutscenes, this is where all the plot and character development happens.  It's vitally important to talk to people and befriend them, as it raises your "Social Links" which let you summon higher-level persona and give them more experience.  Plus it's actually a lot of fun, and tends to be more down-to-earth than most anime-style hijinks you find in these sort of games. One disappointment is the fact that despite the interesting use of LGBT issues, you can only have the protagonist date women; a missed opportunity.  There are also sidequests to get, which give you useful items or unique persona to summon. You can pick up part-time jobs for extra cash, too.  This all runs on a pseudo-real time system: you can do an action in the day and one in the evening, and then it's on to the next day.  You never really feel like you don't have enough time (only some actions "use" time), which is a big improvement over previous games in the series.  The biggest problem with this is, after you finish a Social Link, is that character development just sort of stops.  You are supposed to develop them in a balanced way, but if you min-max your way to powerful attacks the plot suffers, so the whole thing can be zero-sum occasionally. 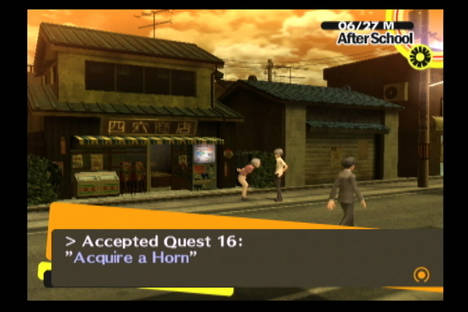 
For those of you who have only played traditional JRPGs, Persona 4 will have a style like no other game in that genre.  The game comes with its soundtrack, and Shoji Meguro's latest work is some of his greatest.  The art style is also very different, making the whole package unlike anything most gamers have ever seen.  Just watch the intro, you'll see what I mean:

But what does it all mean?


Though longtime fans of the series dismiss it because it's easy and popular, there really is a reason it's the first to gain wide recognition.  It's a solid game, and is the least frustrating of any MegaTen games I've played.  This can be a problem, though, if you want to further explore the series.  It can very hard to play some of the older games if your first is Persona 4, but I do encourage it.  Persona 4: The Golden, the updated rerelease for the PS Vita, rebalances the characters and adds several new scenes (and a new character), and makes it even easier to play. Both are some of the best games for their respective systems, and are worth checking out if you want a polished, new JRPG experience.

Next post, I'll talk about the game that's responsible for Persona 4 being released stateside, Persona 3.  Stay tuned!
by Unknown at 12:43 PM