UPDATE 12/31: I probably should've put the documentary Blackfish on here. You should definitely watch it. It's currently streaming on Netflix.

Most space films are about saving the galaxy, stopping xenocide, all sorts of epic sagas. Gravity manages to be a very intimate, small space movie. There's really only one main character and one supporting character, and that's it. No huge musical score either. I'm not a Sandra Bullock fan, but she does a great job here, reminding me of James Franco's "solitary character trying to save themselves for the entire film" performance in 127 Hours. Breathtaking cinematography and a strong female protagonist (something movies in general and sci-fi in particular can use more of) make Gravity one of my favorite films of 2013. A lot of sci-fi geeks preferred Europa Report this year, but Gravity is less ambitious in scale and more tightly written and heartfelt.

Edgar Wright, Simon Pegg, and Nick Frost's Shaun of the Dead and Hot Fuzz are two of my favorite comedies of all time, and they complete the spiritual trilogy with The World's End. It doesn't quite stand toe-to-toe with them, but that might only be because I haven't watched it dozens of times yet like I've watched the other two. The film starts off slow as a story about old friends getting back together, but it quickly escalates into the trio's signature insanity. A commentary on suburbia and pub culture... with evil robots. This movie was in production for years, but seemed to get overlooked because of the similarly-titled and similarly-premised comedy This Is the End hitting theaters a month earlier. Hopefully The World's End stands the test of time and lives on as a cult classic like its predecessors.

3. The Hobbit: The Desolation of Smaug

Everyone seemed to hate this movie. It was everything I wanted the followup to the first Hobbit film to be. While An Unexpected Journey had to spend tons of time introducing all the characters and storylines, The Desolation of Smaug gets to skip most of the exposition and head right into the story. If you want something deep and meaningful, go watch The Lord of the Rings. This movie is just pure movie fun. The barrel escape scene, my favorite scene from the book, is one of the best comedic action sequences I've seen in a mainstream film in years.

It's awkward to make The Hobbit AFTER making the chronologically-later and larger-in-scale Lord of the Rings, but Peter Jackson makes it work to the film's advantage here. When Bilbo loses his Ring and has to take it from a baby spider, he does so with the uncharacteristic fiendishness of a drug addict--some great foreshadowing of things to come with the Ring. And of course, Benedict Cumberbatch's performance as the dragon Smaug is a thing of beauty, somehow making a talking dragon not sound super cheesy.

Pedro Almodóvar wanted something a bit more lighthearted after working on The Skin I Live In in 2011. I'm So Excited (Los amantes pasajeros in Spanish) is a gay comedy about a doomed flight full of quirky passengers. The vast majority of the film takes place on the plane itself, with the eccentric flight attendants trying to figure out how to calm the passengers when they know their plane is going to crash. This is the kind of comedy American studios never make anymore, with the trademark Almodóvar flair and some nifty cameos by Almodóvar veterans Penélope Cruz and Antonio Banderas.

This movie is not for everyone. The acting is inconsistent, the plot doesn't quite make sense, and it's all in black and white. But Escape from Tomorrow is my favorite film of the year by a landslide. It was filmed entirely on location at Disney World and Disneyland without permission. The film's official website has a clock counting the amount of time it's been released without getting sued by Disney. 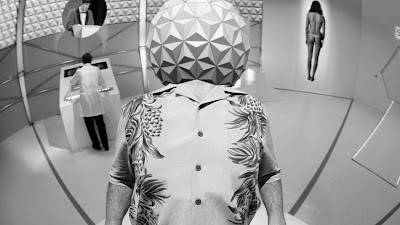 How does this movie even exist?! Escape from Tomorrow was filmed undercover with the actors and crew pretending to be regular Disney World tourists taking pictures and video of their family vacation. The director flew all the way to South Korea to edit the movie in secret, and now that it's been released, Disney isn't suing because they know it would only give Escape from Tomorrow more publicity. It's a surrealist commentary on consumerism and the Male Gaze with trippy visuals and creative camera work. Even if it's not the most expertly crafted film, Escape from Tomorrow is the most daring, adventurous movie of 2013, and you need to see it. It's currently available for streaming on iTunes and Amazon Video.
by Unknown at 5:09 PM

Email ThisBlogThis!Share to TwitterShare to FacebookShare to Pinterest
Labels: best of 2013, Escape from Tomorrow, Gravity, I'm So Excited, The Hobbit, The World's End