-Captain America #11 (Rick Remender, Carlos Pacheco)
Dealing with the aftermath of being trapped in a hostile dimension for twelve years, this issue takes on a more low key tone as it shows Captain America getting reacquainted with the present day.  What this results in is a rather touching character moment as he tries to let go of the past so that he can move forward and protect the present.  Some might find it corny, but I thought it was well done.  Carlos Pacheco's art remains remarkably similar enough to the established look of the book that the transition in artists is seamless; I suspect the colorist is to thank for maintaining consistency.  Nuke's appearance in the subplot assures an interesting set of upcoming issues as it will provide Cap with a nice ideological foil as well as someone to punch.

-Deadpool #16 (Brain Posehn, Gerry Duggan, Declan Shalvey)
Comedy takes a backseat as the current story arc really cranks it in gear.  Laughs are to be had, but they're more a result of the general setting, North Korea, and some humor can be found if you're really into dark stuff.  I'd like to take a moment and mention that this is a story about Deadpool breaking out of a North Korean prison/experiment camp.  Who doesn't want to read that?  The set-up is a great homage to Barry Windsor Smith's classic "Weapon X."  Along the way there are some very tight action sequences, and once again Shalvey impresses me.  If you're still on the fence about checking out this issue then I have three words for you: North Korean X-Men. 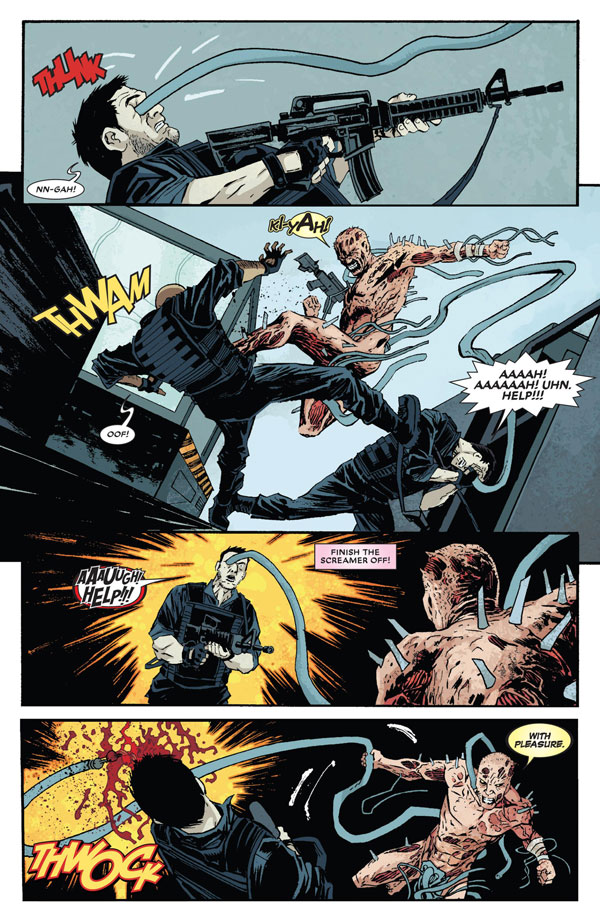 -Avengers #19 (Jonathan Hickman, Leinil Francis Yu)
Avengers... IN SPACE!  The Avengers participating in a space opera is the very definition of the type of comic book I want to read.  Much of this concept pulls through and provides the framework for a magnificent comic.  An extinction level threat is a good one, but the perpetrators of said event, "The Builders," are a weak point of the story.  They've certainly made an impact in the short amount of time they've been active, but they seem like such an arbitrary choice of foe.  I see little reason for these builders to be a more substantial threat than anything else the Avengers have already defeated.  This misstep is keeping the current Avengers story from true greatness.

-Aquaman #23.1: Black Manta #1 (Geoff Johns, Tony Bedard, Claude St. Aubin)
Forever Evil is DC's current event where the evil Justice League has taken over the Earth.  In case you, the reader, didn't know that this issue spends way too long following the exact story beats from the first issue of the event.  What that means is that this comic is padded out way too much and has enough story for maybe half an issue.  That said, it'd be a good half issue, because the stuff being done with Black Manta is really interesting.  As a villain his entire motivation has been the demise of Aquaman, so in the opening of the story, the question is posed to him, "What happens when you [Black Manta] kill Aquaman?"  The closing scene of the book reveals this which in turn hooks back in with the Forever Evil main series.

-Action Comics #23.2: Zod #1 (Greg Pak, Ken Lashley)
Pak manages to weave an entertaining origin story for Zod, just like he did for Darkseid last week.  This week we are treated to Kryptonian Tarzan turned warmonger.  To my knowledge Zod hasn't shown up in the New 52 except for brief appearances in the Action Comics Krypton back-up story.  He shows up in a big way here as the character is given a driving purpose and an uncompromising ruthlessness that makes him a fantastic villain.  Of particular note is Zod's framing flashback that makes sure the reader knows what exactly this villain is capable of.  In one issue a formidable and threatening foe for Superman has been crafted, and I honestly cannot wait for the Man of Steel to face General Zod.

-Justice League #23.2: Lobo #1 (Marguerite Bennet, Ben Oliver, Cliff Richards)
I had almost forgotten about the Lobo controversy since it's something like three DC scandals ago, it's hard to keep up.  Black Manta and Zod were enjoyable comics, and the more traditional Lobo depicted on the cover led me to believe this would at least be a passable comic.  Optimism was quickly replaced and it became apparent that in my hands was a bad comic book.  I won't go into great detail as to why the change in character is downright stupid (others have done that for me) but it's ridiculous that someone at DC must think that people want their fun characters replaced with ones edgier than the standard comments section of news sites.  Conceptually the comic is coming from a bad place, and the execution matches the poorly thought out ideas.  How much you like the art is subjective, but what isn't is poor page composition.  Using two static full page splashes with only 4 pages in between is lazy and poor storytelling.  The written word in general is egregious especially Lobo's bizarre verbal tic of "Sorry. Not Sorry."  A potential high point exists if you too are a wrestling fan since the opening words of the book are "You think you know me." 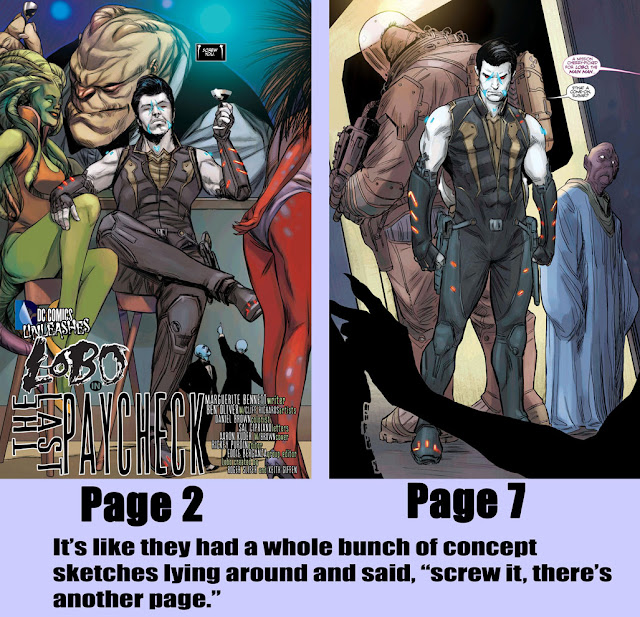 -The Manhattan Projects #14 (Jonathan Hickman, Nick Pitarra, Jordie Bellaire)
Wernher von Braun and Yuri Gagarin chilling in a sauna is not something that I would have imagined seeing, but after reading it in the latest issue of The Manhattan Projects I am a more complete person.  We get a better look at some of the relationships between the various members of the MP, and the previously mentioned friendship between Russian Cosmonaut and German cyborg rocket scientist is heartwarming in its own strange way.  Oppenheimer's schemes allow him to outmaneuver everyone which nicely sets up a climax that hopefully will include a prison break sequence.  Just when I thought I was completely used to the artistic stylings of Pitarra he goes and draws a page that actually makes me do a double take.  Every time I open an issue I find a new reason to love this series. 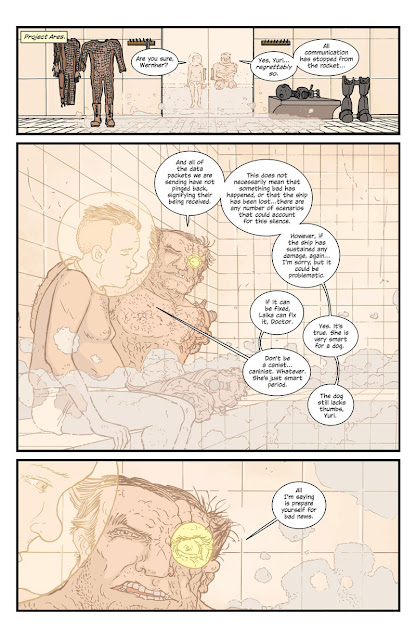 -Prophet #39 (Brandon Graham, Simon Roy, Giannis Milonogiannis, Joseph Bergin III, Matt Sheean, Malachi Ward, James Stokoe, Aaron Conley, Lando, Ron Wimberly)
Diehard's long history is told in a rather stunning fashion on the pages within the 39th installment of Prophet.  The old cyborg has had many different phases in his life and brief snippets are shown of select ones.  Each new passage of time is marked by a shift in artists.  What might be a recipe for disaster actually results in a expertly crafted comic that effectively conveys the loneliness that accompanies a man granted virtual immortality.  Don't worry though, stuff still gets killed in the traditional ways of Prophet.  In many ways this encapsulates the series in one issue and is easily one of my favorite issues of the year. 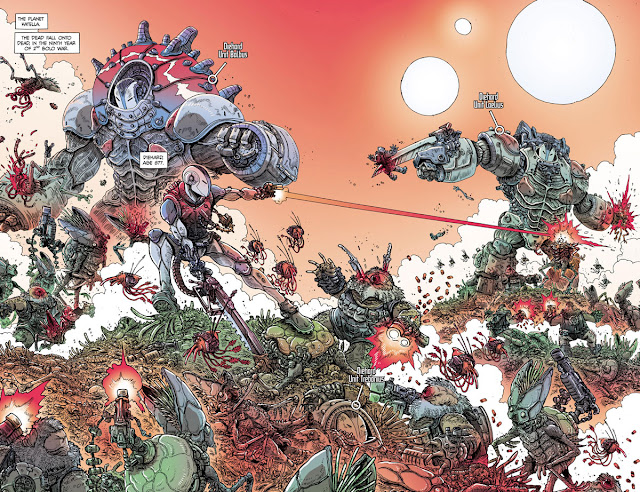 -Eternal Warrior #1 (Greg Pak, Trevor Hairsine)
Greg Pak writing a comic about a character called the Eternal Warrior sounds like a winning proposition to me.  It is too.  Character and conflict are quickly established through the use of action so there's never a dull moment.  A battle against berserk followers of Nergal is used for the opening, come on, that is a good sign.  Hairsine's art is something else too.  Without a doubt the newest Eternal Warrior will be something to look forward to each month. 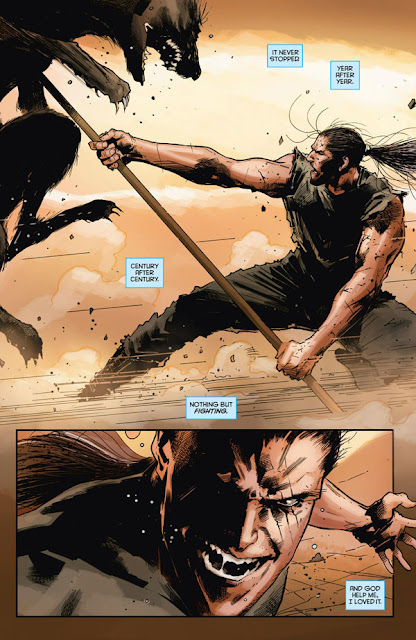 
The current story arc comes to a conclusion this month as old prop planes are souped up with lasers and other future tech to fight against flying saucers.  Of course there is more absurd stuff going on too.  Drama borrows some of wacky hijinks' alotted time and it appears things are going to get rough for the titular heroes.   I'd be hard pressed to think of a comic that is more pure enjoyment and fun than Archer and Armstrong.
by Unknown at 12:18 PM