A bit late, but what are you gonna do

Here is an example of an event tie-in comic done right.  The comic works to move the actual plot of Uncanny Avengers forward while maintaining the tone and playing on the story beats of the crossover event.  This might be an alternate universe but the actions within still have ramifications for the regular 616 continuity.  Ultimately it gives more backstory for the villains the Avengers are fighting in the non Age of Ultron timeline.  It's cool to see some alternate versions of characters.  Namely the Havok present in this issue offers what some might be a counterpoint to the controversial speech he made in Uncanny Avengers #5.

-Superior Spider-Man #10 (Dan Slott, Ryan Stegman)
With the grasp of the octopus getting even tighter, things begin to slip through the cracks.  This comic is another intriguing entry in what is becoming one of the most different Spider-Man stories ever.  There's no way the true Peter Parker doesn't come back at some point, but having a slightly heroic Doc Ock offers some counterpoints to the traditional morality/ideology that we have become accustomed to with Spidey.

-Deadpool #10 (Brian Posehn, Gerry Duggan, Mike Hawthorne)
No joke, Deadpool is a good comic right now.  It hits action and comedy beats, and neither comes at the expense of the other.  The two elements play off of each other and exist in a harmonious state that Confucius would approve of.  It also provides a less serious, but arguably more entertaining, look at Doc Ock/Spidey's new moral code.  The C-list villian spectacular of a fight is great for a number of reasons.  "I'm the Trapster bitch!" and the inclusion of Lady Stilt Man are just two examples.

It's another downtime issue for Avengers.  Not that that is a bad thing mind you.  It gives time for some character work and philosophy.  Some might not be too happy with character focus being placed on historically unimportant and cast aside characters, but I don't mind a guy like Hyperion spelling out why exactly godlike beings like Thor become heroes.

-A+X #8 (Gerry Duggan, Salvador Larroca, Christopher Hastings, Reilly Brown)
Do you like superhero team-ups?  Silly question, of course you do.  That's all this comic is.  Pure distilled action packed buddy adventures.  There are two team-ups within.  The first is Kitty Pryde and Spider-Woman, and it makes sure you don't ever forget that Kitty Pryde is a badass.  The second is a tale about Purple Arrow (Hawkeye) and Ninja Spider-Man (Deadpool) stopping sewer pirates with a submarine from unleashing Lovecraftian horrors.  Deadpool might or might not shoot off Hulk hand trick arrows.  It's a pretty good week to be a Deadpool fan: 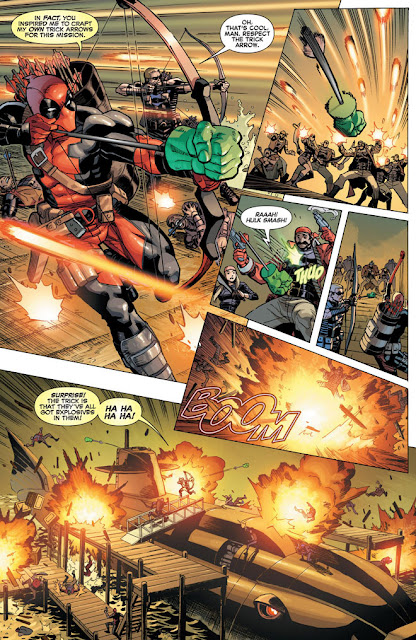 Daredevil isn't necessarily my favorite superhero comic, but it is without a doubt the best one coming out right now (this is where you insult my tastes)  Waid and Samnee are masters of their craft making the story they are weaving a genuine masterpiece.  The comic appears to be rapidly approaching a conclusion to the initial two years worth of stories.  Everyone should be excited for that.
There's a small little back-up story this issue.  It is potentially the most heartwarming short story ever.  Kids with cancer make a comic about superheroes stopping a giant monster.  The metaphor within the comic is pretty obvious, which is fitting considering the creators are children.  The little twist at the end and the  take away message put this short story in contention for best of the year status.  Marvel should go ahead and make it a free digital comic, because everyone should read it. 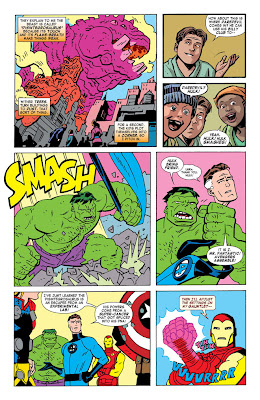 Covers lie.  The stuff you see on the front is used to sell comics and at best is a very loose interpretation of an event inside.  Usually they are truthful about the creative team, but that's not the case here where Geoff Johns and Paul Pelletier are incorrectly given credit.  Ostrander is in his element in this comic writing a story about a somewhat secretive, eclectic group of people who are to varying degrees involved with ghosts/spirits/spectres.  It's a entertaining enough story, but it has the most tenuous connection to the current Aquaman meta-story.  In the end this issue is complete "filler."  I tend to enjoy filler stories though.

So... this wasn't a very good comic, or at least it didn't deliver much entertainment.  It doesn't warrant much of a plot synopsis besides "Justice League C-listers fight Despero."  Not even a love for C-list characters, which I assure I possess, can make this a worthwhile read.  Distrust continues to ferment among the leaguers and the American government remains suspicious of the league too.  The art is all over the place as well, which is to be expected when no fewer than four people share art duties.  The Captain Marvel backup wasn't anything special this issue, but it was consistent, something I can't say about the primary story.

Time for some math: Cowboy from the 1800's + goofball hero from the future = ?  "Comedy gold" and "the best buddy cop duo of all time" are both acceptable answers.  Booster Gold and Jonah hex teaming-up is definitely something the world needs more of.  Things continue to get crazier from there.  A dwarf in a cage gets involved at some point, which surprisingly doesn't actually make the comic any more kinky or depraved than it already was.  At the end of the day it's still a damn fine western and a damn fine comic in general.
There's also a back-up story illustrated by Staz Johnson were the first words spoken are "Adam, if we don't stop Nosferata from completing the ritual, all of Arizona will be crawling with Apache Vampires."  Thus proving beyond a shadow of a doubt that All Star Western is the greatest comic DC is currently publishing. 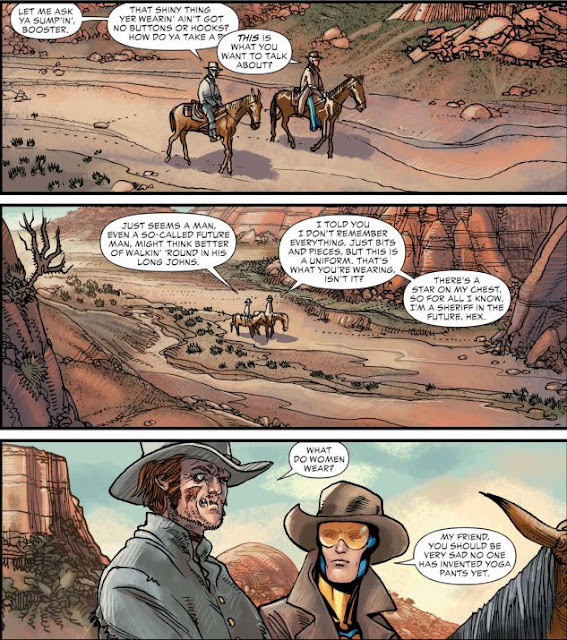 In this inaugral issue the all girl power pop trio "Beryllium Steel" is launched into space.  Things go awry and our heroines end up fighting space pirates.  A band fights space pirates.  This is a love-it or hate-it kind of deal.  Macross 7 is one of my favorite cartoons, so it should come as no surprise that  my $0.99 was well spent on this comic.  While story itself is truly outrageous, it's the art that really elevates the comic and makes it out of this world. 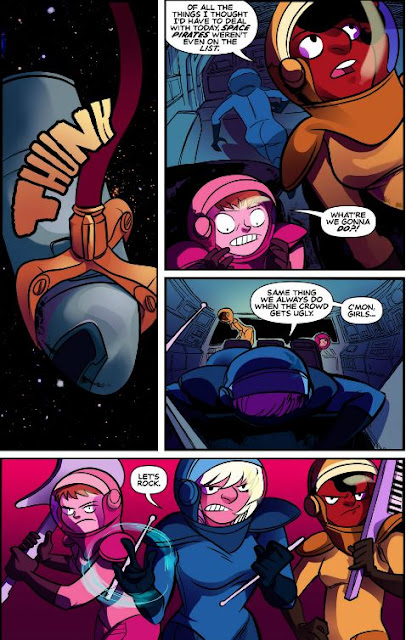